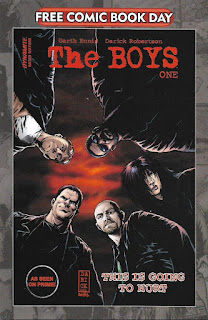 I’m continuing my reviews of 2020's Free Comic Book Day giveaways. Every year, my pals at Stormwatch Comics in West Berlin, New Jersey send those FCBD comics to me so I can read and write about them in the bloggy. Only twice have I actually reached my goal of reading and writing about all the FCBD comics available in one year. Maybe this year is a year in which I three-peat that achievement. I think I can do it, but it’ll likely take me until sometime in early 2021 to complete this particular mission.

First up is The Boys #1 [Dynamite]. It reprints the first issue of the long-running series by Garth Ennis and Darick Robertson, which led to the popular TV series on Amazon Prime.

QUALITY: Top-notch. This series is as grim and gory as it gets, but it’s brilliantly written and drawn. Ennis and Robertson are among the finest comics creators of our time.

ACCESSIBILITY: Since this giveaway is essentially a first issue, a new reader can get into the series from the start. That new reader won’t learn everything about the world of The Boys, but they will be intrigued by what’s here.

SALESMANSHIP: The best I’ve seen this year to day. There are lots of Boys-centric or Ennis-centric house ads, including a double-page spread that shows the covers (comic and photo) of all the trades. There’s also a checklist of Dynamite’s Ennis-written titles. Just the thing to hook anyone who loves this first taste.

SCORE: Ten points out of a possible ten points. This is a standard to which other FCBD giveaways should aspire. 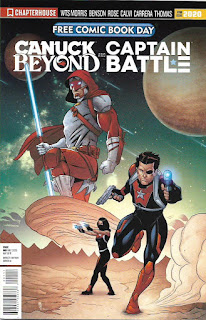 Canuck Beyond and Captain Battle [Chapterhouse] features ten pages of the former, ten pages of the latter and a three-page interlude of Captain Canuck. I confess I winced when I saw this in the FCBD pile. I’ve never been a big fan of Captain Canuck, feeling that the seemingly countless reboots of the character made the history more trouble than it was worth. However, that said, I’d love to see good modern adaptations of the various super-heroes and other characters from the “Canadian whites” of olde.

QUALITY: Mediocre. None of the excerpts were engaging in writing or art. The franchise needs an experienced editorial hand, which would probably mean yet another reboot.

ACCESSIBILITY: Adequate. There’s some hard to read “what has gone before” copy on the inside front cover. It was enough information that I wasn’t entirely lost.

SALESMANSHIP: Surprisingly good. There are house ads for a variety of Charterhouse publications. 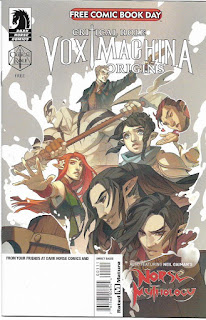 QUALITY: The “Vox Machina” excerpt is dull stuff centered around a group of tavern patrons exchanging tales of gods and/or heroes that may or may not be true. The “Norse Mythology” excerpt is your basic mythological creation tale, adapted beautifully from the original prose novel.

ACCESSIBILITY: Not good for “Vox Machina” and excellent for “Norse Mythology.”

SALESMANSHIP: As good as it gets. There are a lot of house ads for a lot of Dark Horse comics and products. 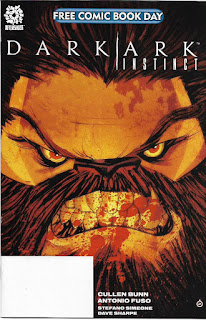 Dark Ark: Instinct [AfterShock Comics] features a 16-page story by Cullen Bunn (creator/writer) and Antonio Fuso (artist), backed up by a five-page preview of Sympathy for No Devils by Brandon Thomas and Lee Furguson.

QUALITY: Not great, not bad. “Instinct” is a stand-alone story that didn’t offer much in the way of background. “Sympathy” introduces Winston Willis, who seems to be a private eye of some sort with an uncanny knack for not dying when things go south as they apparently always do with him. No background here either.

ACCESSIBILITY: Poor. Which it didn’t have to be. If AfterShock had not gone all design-y with the inside front cover, there would’ve been ample room for a “what has gone before” on Dark Ark. Dropping one of the issue’s not very effective house ads would have allowed the same for “Sympathy.”

SALESMANSHIP: Good, but not good enough. Plenty of house ads, but none that really offered decent information on the comics they were selling. Plus house ads devoted to telling the reader how wondrous
various creators and titles were without offering any information on the titles. 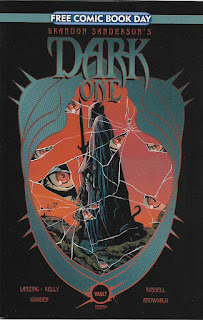 Brandon Sanderson’s Dark One #0 [Vault Comics] features the first 32 pages of a modern fantasy series created by and with a story by the Hugo-winning, New York Times bestselling author. It’s written by Jackson Lanzing and Collin Kelly with art by Nathan Gooden and colors by Kurt Michael Russell. Fantasy has never been a favorite genre of mine, but the modern real-world elements of this and its intriguing characters hooked me.

QUALITY: The story, the writing and the art are all first-rate. One of the better FCBD issues I’ve read this year.

ACCESSIBILITY: Though this opening issue doesn’t answer a lot of my questions, there’s more than enough here to get me into the story and keep me there.

SALESMANSHIP: This issue is a come-on to the hardcover and original graphic novel. It’s a limited focus but it succeeds.