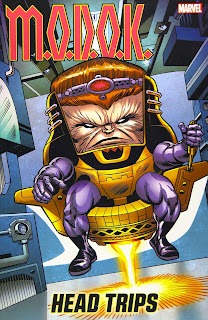 I started writing this bloggy things several months ago. My review columns are often what I call “modular” columns. I add to them as time permits. In this case, it’s taken me until now to get back to the three reviews I had already written and add another review to the mix. Here we go...

M.O.D.O.K.: Head Trips [Marvel; $39.99] collects over 400 pages of stories featuring the Mental Organism Designed Only for Killing. Created by Stan Lee and Jack Kirby, Modok is a character I like a lot. However, reading stories I hadn’t read before and re-reading the earlier Modok tales, I came to realize I like the visual of the character more than most of what’s been done with him.

The original Lee/Kirby stories from the Captain America series in Tales of Suspense are terrific, as is most of what came from that most talented of creative teams. After that, the Modok tales just don’t have that zing. They are readable, even entertaining in some cases, but they don’t live up the character’s awesome visual.

Super-Villain Team-Up: M.O.D.O.K.’s 11 #1-5 is an exceedingly odd but interesting caper/heist adventure. Modok is the Danny Ocean of the series with various super-villains filling out the roster. Lots of twists and turns along the way. Modok is no Frank Sinatra or, if you prefer, George Clooney, but I was amused.

Better and more insane was M.O.D.O.K.: Assassin #1-5, which takes place in one of those Marvel crossover events that make no damned sense. That said, the Modok in this series was fun in a murderous sort of way. When he falls hard for a female Thor, hilarity, albeit  murderous hilarity, ensues.

I read this trade paperback via my local library, which is probably the most budget-conscious way to read it. Amazon currently has it at 34% off; you might find similar bargains elsewhere online. 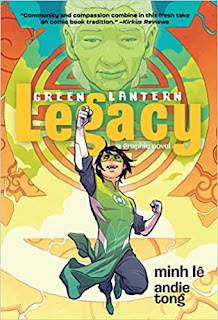 Here’s the back cover skinny on this book:

Thirteen-year-old Tai Pham lives in the apartment above his grandmother's store, where his bedroom is crammed with sketchpads and comic books. But not even his most imaginative drawings could compare to the colorful adventure he's about to embark on.

When Tai inherits his grandmother's jade ring, he soon finds out it's more than just a piece of jewelry. Suddenly he's inducted into a group of space cops known as the Green Lanterns. He is about to learn that being a superhero takes more than just a ring. Does Tai have the willpower and the imagination to uphold his ba's legacy.

There’s a lot I like about Green Lantern: Legacy. It’s not part of  whatever is currently passing for the real DC Universe in current DC comic books. Tai is a likeable if somewhat headstrong youngster.His grandmother is a very interesting character. We even see some familiar Green Lanterns in a story that is well-written and well-drawn. I don’t think it’s an award-winner, but it’s a fine way to spend a couple hours. 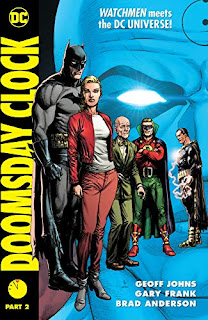 After reading Doomsday Clock Part 2 [DC Comics; $24.99] by Geoff Johns with artist Gary Frank, colorist Brad Anderson, letterer Rob Leigh and original editor Brian Cunningham, I gripped that handsome hardcover in my hands and asked myself “What the heck happened in this series?” I was lost.

The writing was first-rate and the art even more so. I thought the final issue of the series was one of the best Superman tributes I had ever read. But, somewhere along the way, I lost the thread of what was surely meant to be an epic tale. I have no clue as to how it fits into the current DC Universe continuity or even if it does fit into that continuity. I am lost.

Somewhere down the line, possibly when all the issues of Doomsday Clock are collected into a single volume, I’ll reread this series in a single sitting. I’m hoping I’ll grasp what I’m missing at this time. Because I really want to love this story. 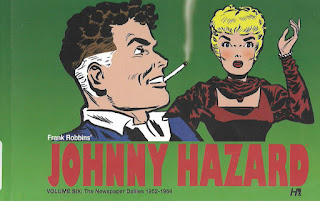 I was a fan of Frank Robbins from his first Batman stories for DC Comics. When he started drawing some of those stories, I became a bigger fan. When the sorely missed Menomonee Falls Gazette started running his Johnny Hazard newspaper strips, well, I couldn’t have been happier. Until...

I actually got to work with Frank Robbins. I was very instrumental in his coming to Marvel Comics. We worked together on Ghost Rider and Captain America. To this day, he’s one of my favorite artistic collaborators. He’s a giant to me.

Hazard rarely gets any time off. Just as he finishes one adventure, the next begins. We start with Countess Destina, who claims to be nearly 500 years old and who has mentally enslaved a young English lord. From there, we get a scheme to steal the crown jewels before Queen Elizabeth’s coronation...an assassin targeting a young lad who took his photo by accident...French pearl smugglers who frame Johnny...a scam involving forged paintings...and an exciting Roman holiday that turns very dangerous. Our boy Hazard has the stamina of a Superman.

If you have not already discovered Johnny Hazard, you should make that a 2021 priority. The volumes aren’t cheap, but I’ve been able to read them through my local library system. You might be able to do the same, Highly and incredibly recommended.