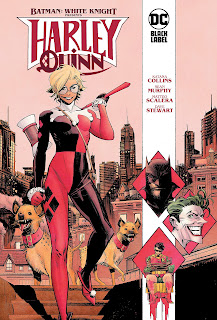 Thanks to churlish click bait assholes, I have become known as the guy who hates Batman. I readily admit to hating the toxic Batman of too many comic books over the past decade and I loathe that other terrific DC Comics characters are largely ignored in the company’s desperate need to squeeze every last penny out of the Bat. Sadly, nuance is lost on the afore-mentioned asshats.

Batman was once my favorite comic-book character and I remain fond of many of his incarnations. I even read many of the recent Batman trades in my unending hope to find a Batman I can enjoy and who I find reasonably represents the original core values of Bill Finger and Bob Kane’s creation. Sometimes I get lucky.

Not knowing it was the third in a series of collections, I enjoyed Batman: White Knight Presents Harley Quinn by Katana Collins, Sean Murphy, Matteo Scalera and Dave Stewart [DC Comics; $24.99]. It’s an alternate universe version of Batman and Harley that has Bruce Wayne behind bars, Harley (now a mother of two kids and two hyenas) working with the Gotham City Police Department and a villain who calls himself the Producer trying to usher a new age of villains to rival Batman’s old rogues gallery.

Published under the “Black Label” imprint and aimed at readers 17 and older, this volume has a Bruce Wayne I like and even admire. I have never been a fan of the “Bruce Wayne is the mask” incarnations of Batman. Wayne deserves better than that.

Harley? She’s a revelation. She struggles with her very complicated history and psychology, but she, too, is a good person trying to do her best to make things right. Her relationship with her kids, the GCPD and other familiar members of the Batman cast were convincing and welcoming.

The story and writing were top-notch. The art and storytelling was solid and vibrant. I liked this one enough that I’ve requested the earlier White Knight volumes from my local library system. I think you might like Batman: White Knight Presents Harley Quinn. 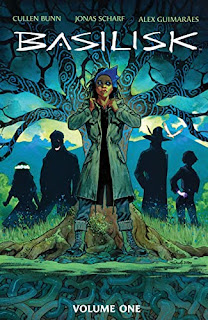 I’m less enthusiastic about Basilisk Volume One by Cullen Bunn with Jonas Scharf and Alex Guimaraes [Boom! Studios; $14.99]. Though it is a decently scary and well-written start to an ongoing series and though it boasts appropriately unsettling art and color, it falls somewhat short of winning me over with this collection of the first four issues of the series.

Hannah is the sole survivor of the first appearance of the Chimera, a “family” of beings with supernatural powers are based on the five senses. The Chimera slaughter people wherever they go and have also picked up a cult of worshipper along the way. Hannah first kidnaps and then teams with Regan, a member of the Chimera who has fled the group and wishes to bring an end to them.

My main dissatisfaction with this first volume is that it promises to build to a confrontation between Hannan and Regan and the four remaining Chimera and never gets there. The battle is pretty much just the cult members getting blown away while the Chimera remain largely unscathed. To be continued. This feels like padding to me. One or two more issues could have easily finished off this series, which would have made for a tighter story.

I generally like Bunn’s writing, so I will request the next volume from my local library system when said volume is published. I hope he’s got something more to show me. 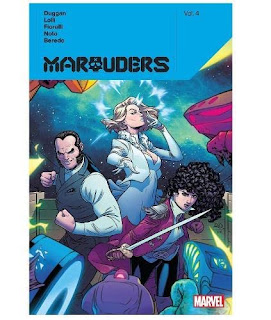 Marauders By Gerry Duggan Vol. 4 [Marvel; $17.99] collects issues #22-27 of the series, which concludes the first incarnation of this title. I really wanted to love Marauders. I got a kick out of the political intrigue that was at the heart of the series. Ultimately, however my love was denied by how many of the stories relied on my having knowledge of other X-Men titles I had not read and had very little interest in reading. I always liked this title. I liked the main characters, especially Kitty Pryde. I liked Duggan’s writing on the title. The various artists who worked on these issues always gave us good art and storytelling. Yet, as the Marauders set sail sans Duggan, I continue to wish the title has been much more self-contained.

There is a second Marauders series, which is either already here or coming soon, to be written by Steve Orlando. I’ve enjoyed several Orlando comics in the past, so, as soon as the first collection of this new Marauders comes out, I’ll request it from my local library system. I hope it stands on its own without my having to read all those other X-Men titles.

Let me note that, from what I have read of the new X-Men titles, I think the whole Krakoa concept is brilliant. It was an interesting way to get the X-Men franchise back on track. Unfortunately, it’s just too complicated and vast for me to follow at this time. Maybe at some point in the future. 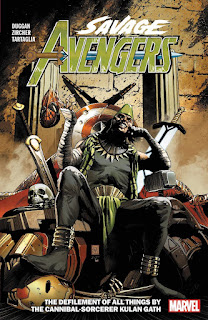 When I first heard of Savage Avengers, I thought it was just about the dumbest concept for an Avengers spin-off imaginable. Indeed, it was such a stupid idea I knew I had to read it. That mania served me well. I love Savage Avengers.

Written by Gerry Duggan, Savage Avengers Vol. 5: The Defilement Of All Things By The Cannibal-Sorcerer Kulan Gath [Marvel; $17.99] is a wonderful finish to the first series of the title. The craziness of Conan and Doctor Strange more or less leading a team of some of the more violent Marvel heroes and villains against the Cimmerian’s ancient enemy is somehow delightful. The final resolution of that eons-old enmity is brilliantly unexpected.

A quick shout-out to artist Patch Zircher. I’ve been a fan of his for many years, but he hit new heights with his work on this title. It’s a shame I’m not really writing comics for Marvel or DC these days because I’ve love to work with Zircher.

There will be a new Savage Avengers series coming from writer David Pepose in the near future. However, with Marvel Comics having ended its license to publish Conan comic books, I’m not sure how long the character will be appearing in Savage Avengers. Still, even without Duggan, I’ll continue to follow this insane concept once the trade collections become available from my local library.

That’s all for today’s bloggy thing. I hope to back soon with more news, views and reviews. Stay strong.