WHAT I READ IN TEXAS 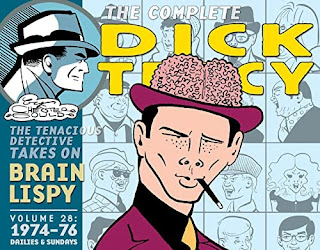 I had a wonderful time at the Eastern Rim Funny Books and Vintage Con in Baytown, Texas a few weekends back. Since I have never been much of an after-hours convention party monster and since my son Ed was hanging with an Ohio State friend for two of the three nights of our stay, I was able to do quite a bit of reading during my stay in the Lone Star State. So why not share the things I read with you bloggy thing afficionados?

Most of what I read was on my Kindle, but I packed a physical copy of The Complete Chester Gould's Dick Tracy Volume 28 [The Library of American Comics; $44.99]. This beautifully-crafted hardcover collection reprinted Tracy from July 7, 1974 to March 14, 1976, a very odd and interesting time for the comic strip and for creator Chester Gould.

I’ve described this volume as “a psychedelic trip” and Gould as “a great cartoonist gone right-wing ape-shit and still telling wildly entertaining stories.” Some of the sequences are just plain weird, especially when Gould (through Tracy) rants about weak judges who coddle criminals and release murderers from jail after just a year or two in prison. This is typical of the Republican rhetoric which ridiculously exaggerates the situation and ignores that even such criminals have rights. To Gould/Tracy, judges who try to apply the law justly are as big a menace as the murderers. The detective and his team are downright bloodthirsty, celebrating the bloody deaths of those they pursue and cheering that the deceased never got their day in court.

Gould’s insane political commentary would have destroyed any comic strip by a lesser talent, but this book shows him struggling with other creative issues as well. For one thing, with comic strips now being published at a smaller size than previously, the lettering on the strip becomes enormous at the expense of the art. For another, Gould is no longer able to show violence as graphically as he once did. Virtually every important death takes place off-screen.

Even with all those concerns, I highly recommend this penultimate volume and all the other volumes in the series. Gould was a pivotal comics creator. Today’s creators can learn much from him. Today’s readers will find some great entertainment. 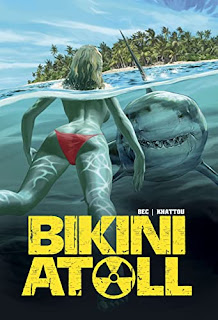 Read via my Kindle Fire, Bikini Atoll by Christophe Bec and Bernard Khattou [Clover Press; $24.99] is a scary horror movie waiting to be made. Vacationing divers and tourists take what they think will be a relaxing weekend trip to Bikini Atoll, the scarred island where the U.S. tested nuclear bombs for four decades. But there’s something awful in the waters surrounding the island and something even worse on the island itself. Things go bad quickly.

The graphic novel is terrific. Interesting characters. An overall sense of menace. Shocking moments. I recommend it to any who likes a good horror/monster story. As for a possible movie - I would be astonished if the film rights haven’t been snapped up already - its success would depend on the actors cast as those very interesting characters. This could be a blockbuster. 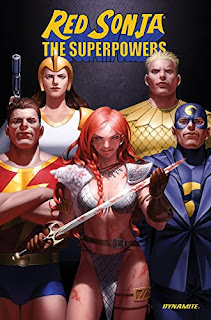 The She-Devil With A Sword has battled barbarians, scuffled with sorcerers, and mangled magical creatures of all sizes. But when a collective of superheroes from the Project enter her world, will Sonja know how to adjust to their foreign ways, before they all kill each other?

This one was a wee bit difficult to get a handle on. The heroes of the Project come from different realities and have banded together to protect their version of the Multiverse. The heroes are all very familiar. Some are public domain super-heroes from the 1940s comic books. Some are pastiches of other existing super-heroes. They meet Sonja. They fight Sonja. They join forces against the real villain. They recruit Sonja to join them.

I tried but I could never believe/accept this take on Red Sonja. She came off as a cross between a party girl with a sword (or some more futuristic weaponry) and Sergio Aragones’ Groo. The collection of the mini-series is not without entertainment value, but I found it acceptable at best. 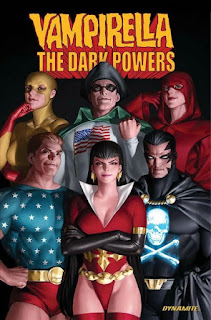 Much better on every level was Vampirella: The Dark Powers by Dan Abnett and Paul Davidson [Dynamite; $19.99]. The Amazon pitch for this one:

Welcome to the Project, interdimensional collective of superheroes, tasked with recruiting members from across infinite worlds. And their newest recruit is...VAMPIRELLA!?

The grand adventures of Vampirella as an interdimensional superhero and member of Project Superpowers! Will she be able to fit in, or will she take a darker path?

Vampirella is a much better fit for a super-hero universe than Red Sonja. While she believes her powers are science-based - after all, she is an alien from outer space - many of her new teammates think of her as supernatural and, worse, a supernatural demon. That makes for good and intriguing conflict.

Vampirella is more naturally violent than the super-heroes. She is dismissive of their code against killing, though she does attempt to adhere to it.

This series happens more or less simultaneously with the Red Sonja series. Even with my above-stated misgivings about Super Sonja, I’d be up for more books in this reality.

As I become more comfortable with reading comics on my Kindle, I’ll be downloading more comics to it. It’s a far lighter option for my convention traveling.

I’m working towards increasing the frequency of these bloggy things of mine. I have several topics waiting for me to write about them. Hopefully, I’ll get to them soon.

Have a great day. See you soon.

Posted by Tony Isabella at 8:21 PM