BRING IT ON: CHEER OR DIE 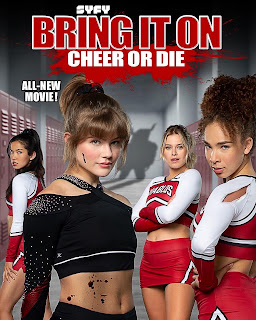 Categorizing Bring It On: Cheer or Die (2022) as a “B-movie” is a kindness I’m not sure the low-budget film deserves. All the same, when I viewed it on the Syfy Channel, I found it both kind of fun and inexplicably fascinating. It’s the seventh installment of the Bring It On series of cheerleading movies. The last one was 2017's Bring It On: Worldwide Cheersmack.

I have not seen any previous Bring It On movies. I think one of my daughter Kelly’s friends, who was a cheerleader herself, was a fan of the series. Only the first movie, which actually featured some name actors, was a theatrical release. The rest were all direct-to-video. By the time we get to this Halloween release, the acting is adequate at best, though the transition to slasher movie is sort of brilliant in its own way.

Cheer or Die is rated PG-13 for violence, language, sexual material and some drug content. All of those are quite mild, but, it being  2022, I’m sure some religious zealot is calling down the wrath of God on the movie and all who made it. I mean, though it comes very late in the film, two cheerleaders share a sensitive kiss and are later shown to be in a relationship. The school mascot is someone in a devil costume with a pitchfork and the team name is Diablos. Yep, the mark of Satan is all over this one and probably my sarcasm as well.

The Wikipedia synopsis: When Abby and her Diablos teammates are forbidden from doing any risky cheer stunts by their overly cautious school, they fear that they will be laughed out of the upcoming regional cheer competition. The squad comes up with a plan to choreograph a winning routine in secret at a nearby abandoned school. Once at the school to rehearse, one by one, the cheerleaders begin to disappear. By the time they realize they're locked inside with a killer, it may be too late for any of them to survive. They must use their skills to fight off a killer who gives them only one choice: Cheer or die!
The reason for this restriction is, a few decades prior,  a Diablos cheerleader fell from the top of a high formation, broke her neck and died. A flashback shows pretty clearly that another cheerleader
deliberately pushed the girl’s foot to cause the fall. The killer was then signed by the Cleveland Browns to the largest cheerleading contract in football history. Which is not true, but I like to take shots at the immoral Browns ownership whenever I can. She doesn’t get a contract, but, apparently, no one saw her murderous move and she got away with it. 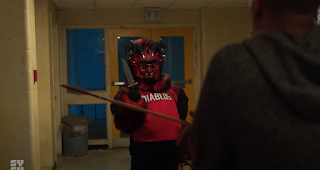 Despite the restrictions, the Diablos cheerleaders are competing in a tournament away from their school. Since their principal has made it clear how much she despises them, they don’t figure she’ll show up at the tournament to...ah...cheer them on. But they need to find someplace to practice their forbidden routines in secret...and what better place than an abandoned high school? What could possibly go wrong with this plan? 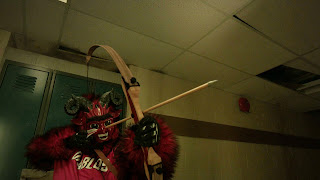 I’m going to cut to the chase here. Someone wearing the costume of the school mascot is killing the cheerleaders. The surprise turn of events comes when one of the surviving cheerleaders puts a knife to the throat of another cheerleader.

The person in the costume is the niece of the cheerleaders who died decades earlier. The cheerleader with the knife is her twin sister..The principal is their mother and also the kid sister of the dead cheerleader from decades earlier. From the time her twin daughters were toddlers, Principal Nasty brainwashed them into believing they had to avenge their aunt’s death...and sent them to survivalist and other training camps to develop their murderous skills.

This is where the movie actually gets enjoyable. The twins demand the cheerleaders perform certain moves or die. I’d been wondering how they were going to work the title into the film.

The cheerleaders, encouraged by their team captain, all succeed in the cheering. They also manage to get the drop on the twins for a fight scene in which said captain directs her team’s attacks with cheerleading moves. The surviving cheerleaders get away from the twins and, despite the twins having chained all the abandoned high school’s doors shut, manage to escape using various cheerleading skills. The movie commits to the cheerleading team. 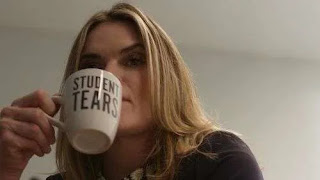 As her team makes it to a roof, the captain faces one of the twins.We learn it was the captain’s mom who killed their aunt all those years ago. But, since the twin seems determined to visit the sins of the parent on the child, the captain kills her in self-defense.

Using their cheerleader powers, the captain and her team drop from the roof to the school grounds. They reach their bus and their stoned bus driver. Before the bus driver can fully come out of his buzz, he gets an arrow through the chest, courtesy of the surviving twin. And she’s got more arrows.

The cheer captain ain’t taking this shit no more. Yanking the dead stoner out of the driving seat, she guns the engine and attempts to run over Cheer Arrow. The murderous young lady manages to lie down between the tires and taunts the cheer captain, who promptly backs over the killer and ends her.

A year later, the greatly expanded cheer team is at the tournament they missed and win big. The captain gives an acceptance speech in which she sends love to their late teammates and all those who’ve shown them support. 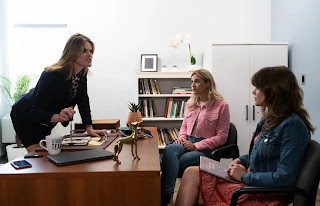 We pan to the crowd where a woman wearing a large-brimmed hat and  dark sunglasses does not join in the standing ovation. She leaves and...surprise surprise...it’s the principal. Is there a sequel in the franchise’s future?

The principal is followed by several crowd members. She might have escaped the police, but not the parents of the students murdered by her daughters. They hired private detectives to track her down and then watch her movements, such as when she entered the tournament school.

One of the parents hits her with a pom-pom and knocks her cold. We see the pom-pom concealed a lead weight. When the principal comes to, she’s bound to a chair in the old abandoned high school. Which is about to be demolished by explosives.

She’s forced to watch a tape of the Diablos cheer team’s victory. Which ends with several explosive booms. Each one getting closer to the principal. Fade to black as the ceiling starts coming down on the woman.

In a world where it often seems there are no fitting consequences for doing evil in reality or fiction, I’m becoming bloodthirsty when it comes to such villains. Real or fictitious. I’m making a list for when I die and come back as a vengeful spirit.

Posted by Tony Isabella at 3:11 PM