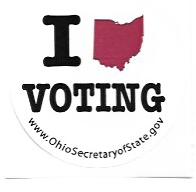 I’m sure Ohio’s current secretary of state is a very busy man. He’s a Republican and part of the GOP’s unconstitutional redistricting in my state, as well as that vile criminal organization’s attempts to disenfranchise those unlikely to vote for them.  Still, someone in his office should have had the time to come up with a better and clearer sticker for voters.

Though I’m not 100% back up to speed, I got up this morning, made myself presentable and went to vote at the Medina County Board of Elections. As I was pulling out of my driveway, I noticed someone had vandalized my Tim Ryan sign. From a distance, it looked as if someone had punched it.

Ryan is running to be reelected to the Senate. His opponent is the truly creepy J.D. Vance, who, after being against Trump in 2016, is now a loyal Trump ass-kisser. Of the several signs on my lawn, the only one vandalized was for a candidate whose opponent was endorsed by Trump. That it was singled out for vandalism does not surprise me. We know Trump’s followers are violent.

I’ve been voting at the Board of Elections for a couple decades or so. I used to vote at the local high school until I had enough of being harassed by an obnoxious Republican poll worker who, knowing I was a proud and relentless liberal, tried to get my goat election after election. When I complained about his behavior to his face, he loudly exclaimed “people like you shouldn’t be allowed to vote.” Which was enough for me to get him removed from his position as a poll worker. You fuck with the tiger, you get the claws.

Those who work at the Board of Elections are efficient and friendly as they carry out their duties. They seem to be pretty good when it comes to prohibiting campaigning within a certain distance of the polling place. They’re also excellent at accepting drop box ballots from drivers who would otherwise have a difficult time getting out of their cars to vote. I assume many of the workers are Republican,
but I think they can be redeemed someday.

There was a small line to vote, but it moved fast. I was in and out of the place in ten minutes. Part of that was because of the aforementioned efficiency of the workers. The other part was that I had downloaded the ballot and made my choices in advance.

Voting for Democrats over Republicans was easy. There were a couple of judge races which were ridiculously considered “non-partisan,” but I knew which candidates were Democrats.

There were two issues on the ballot. One concerned bail, the other voting. Both were race-baiting Republican garbage. I voted “no” on them.

There was also a proposed tax levy renewal for the Medina County Health District. It doesn’t cost voters more than they are already paying. The Health District does fine work. I would’ve vote for an increase if they needed it.

Here’s my voting advice for those of you haven’t yet voted. Three simple guidelines.

Don’t believe in the myth of “non-partisan” positions. Find out who Democrats support and vote for them.

Make sure you know what the issues actually mean. The two issues I voted against would have led to unequal “justice” for low-income, non-white suspects and an easier path for Republicans to deny the vote to those not likely to vote for them.

Now go out there and make your Uncle Tony proud.