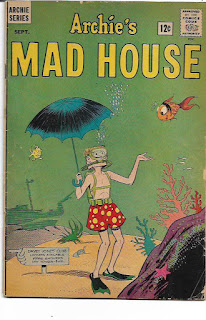 Today’s bloggy thing continues my 136-part series on comic books that hit the newsstands in the month of July 1963. That month was pivotal to my comic-book career because it was the month when Fantastic Four Annual #1 ignited my desire to write comics.

Archie’s Madhouse launched with an issue dated September, 1959. The cover logo usually split “Madhouse” into two words, perhaps to make uninformed readers think the comic book had some connection to the wildly-successful MAD magazine. I don’t think the readers were ever fooled into believing that, but I do think the publisher might have hoped they would be. Because after he success of the original MAD comic and then magazine in the 1950s, several comics publishers launched similarly-named titles, including Cracked, Crazy, Zany and others. Label my conjecture in this case as informed speculation.

Originally, the title starred Archie characters in bizarre stories. However, a few years into the series, the comic switched to mostly one-off stories with science fiction, monster and super-heroes with an emphasis on then-current fads. If a character proved popular, such as George Gladir and Dan DeCarlo’s Sabrina the Teenage Witch, Joe Edwards’ Captain Sprocket  and others, they would continue to appear.

Archie’s Madhouse #28 [September 1963] is cover-to-cover fun with no paid advertisement and only two house ads. The cover features a cube-headed teenager with an open umbrella holding out his hand to check for rain while he’s underwater. The character is similar to Squarehead, who appeared in one-page gag strips in Archie’s Cosmo the Merry Martian. The Grand Comics Database opines the cover was drawn by Bob White. It denoted the indexer’s uncertainty with the usual question mark.

The GCD is uncertain about most credits in this issue. I thought I could identify some writers and artists, but lacked confidence in my identifications. When the original version of this bloggy thing appeared a few years back, I posted several pages in the hope some of my readers could offer more definitive identifications. Comics historian and master detective Martin O’Hearn responded to my call for assistance:

The cover, contents page, and section intro pages: Samm Schwartz. He did most MADHOUSE covers around this time, although DeCarlo did the Sabrina cover of #27. I think the GCD’s reflexively crediting Bob White places him a few issues past his last work on the title, but I'm open to argument. The art on single pages can be harder to ID than on full stories.

All the rest of the art, and on his art, the lettering is by Joe Edwards.

The writer from cover to cover, apart from those two ads, is George Gladir.

The inside front cover is a contents page that denotes this as the “special weightless issue.” The illustration shows teenagers Les and Ches, along with Hilda the witch and the Pink Martian. Les is wearing shades, Ches is the teenager from the cover and Hilda is, of course, Sabrina’s aunt from when she was drawn as the standard hag, a couple decades before the Sabrina TV series turned her into the delightful Caroline Rhea.

The first page of the comic has Les and Ches introducing “the teen-age section” with girlfriends Bess and Tess.

Sabrina appears in “Tennis Menace” (7 pages) by George Gladir with art by Dan DeCarlo (pencils) and Rudy Lapick (inks).  The GCD had this synopsis: Sabrina is determined to seduce handsome Bruce Van Klood away from her rival Rosalind without the use of magic potions until Rosalind begins beating Sabrina at her own game. 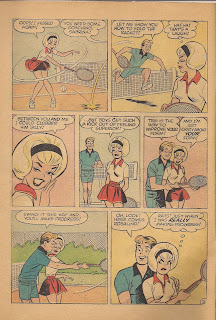 The early Sabrina is my favorite version of the character. She is not evil, just selfish and thoughtless in the manner of many young people then and now. She was originally drawn with a devilish mien about her, a dangerously sexy look. Alas, her appearance was soften over the years, but I’m posting a page of this story so you can see what I’m talking about.

King Neptune stars in the one-page “Something Fishy.” The sea king thinks he needs glasses and goes to an optometrist. The doctor’s eye chart doesn’t have letters on it. It has different kinds of fishes. 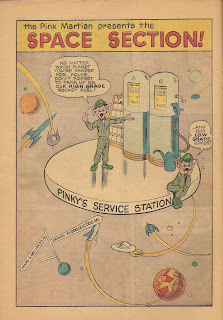 The Pink Martian is the host of the issue’s Space Section.

In “Brainy Footwork” (2 pages), Professor Von Dummkopf has problems with a candy machine and his new rocket. He solves both problems by kicking the devices. 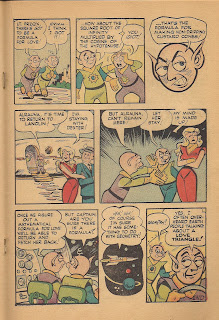 “The Lanolites” (5 pages) is a funny tale of visiting aliens with mathematical formulas to predict everything. The one equation they can’t solve is love. I’m still trying to work out why the female of their kind is a gorgeous blonde while the males are half her size and bald with pointy ears.

The Pink Martian has a toothache in the one-page “The Teeth Feat.” 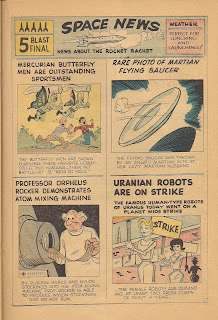 “Space News” (2 pages) has headlines and brief copy for the stories in a futuristic newspaper. Uranian robots are on strike and the Parisian hat designer Pierre Hotairre has just unveiled his latest space-helmet designs. 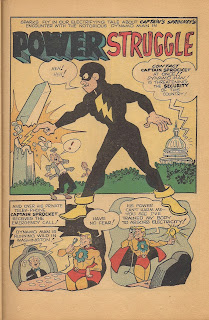 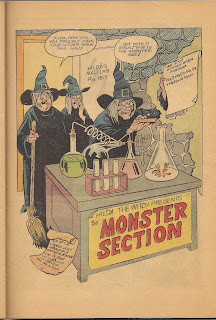 Hilda introduces the “Monster Section” in a full-page gag. Hilda is making her witch’s brew using test tubes and a Bunsen burner.

The “Monster Section” consists of Hilda gag strips. In “The Broom Boom” (2 pages), a broom shortage is caused by the new witch craze of broom surfing. In “Property Predicament” (1 page), Hilda settles a mad scientist dispute over which of them created a monster. In “Trick Stick” (1 page), she makes a goof while conducting her band. On the inside back cover, “Boo! Boo! (1 page) has Hilda scaring a man out of his shadow.

Archie’s Madhouse wasn’t a title I bought regularly, but I’d grab an issue whenever there was one at the barber shop. I used to get comics in exchange for sweeping the hair from the floor and into a series of holes in the floor. There were probably trash containers down below, but I always liked to think it was just a massive pile of hair that could come alive at any moment.  I was a weird kid and I grew up to be a weird adult.

I’ll be back tomorrow with the first part of my report on the 2016 Indy Pop Con.