THAT POOR SON OF A BITCH 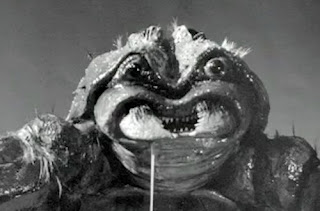 The title of today’s bloggy thing does not refer to the slobbering creature above, who many of you will recognize as the title beastie of The Black Scorpion, a 1957 Mexican-American horror monster movie made by Warner Bros. It refers to a minor character in that movie. It also refers to a more important character in Beast from Haunted Cave, a 1959 monster/heist film. To a lesser extent, it also refers to me, the guy what writes this bloggy thing on a nigh-daily basis. I hope to tie all of the above together.

Let’s start with me. A few days ago, I wrote of the frustration my family and I were facing on different fronts. That frustration has not dissipated. We continue to deal with it. We will get through it all. We always do.

There’s not much I can or want to say about the various causes of the frustration. But the pigeon of bad tidings dumped another load on us on Friday. That’s when I learned Barb, Kelly and I would be losing our health insurance at the end of the month.

Before the right-wing nitwits start dishing out their usual crap, let me state without hesitation that our losing our insurance has nothing to do with the Affordable Care Act. The ACA is a wonderful thing for millions of Americans and, if its opponents were not such bigoted morons, they would see this and work to make it even better for everyone. I do not expect the nitwits to understand this. Instead, they will send me emails vowing they will never read anything that I write ever again. They will miss out on my telling them to blow me, which is not to be taken in the literal sense because...well, because...ewww!

Our current dilemma is entirely on Barn’s former employer, which is  tied to the Catholic Church and which doesn’t seem to have clue one as to what Jesus would do. That misbegotten company is closing its doors completely by the end of the year. It already closed all of its medical facilities and laid off all its medical workers. It’ll  be shutting its insurance business on December 31. If the company exists after that, its future efforts will likely involve clubbing baby seals and drowning kittens. What would Jesus do?

Barb started working for a new company the day after her last day with her old employer. We expected we would be able to continue our existing insurance through 2016. This was important because, among other things, it meant we could get more of our expensive, ongoing dental needs taken care of before we lost access to the dentist we have been going to for over 25 years. Not so.

We have asked our soon-to-be-former insurance carrier to continue to carry us through the dental work. I’m not expecting the Church of the Bottom Line will grant our request.

We should be able to sign on with Barb’s current employer by July 1. It won’t be as good as what we had, but it’s decent. But, unless we come up with the money to pay for the dental work out of pocket, we may have to forego or, at the very least, greatly postpone the work for the immediate future. This depresses me.

If you’re still with me - and I wouldn’t blame you if you’ve left this page to read Mark Evanier’s blog, look at sexy men and women or watch kitten videos - this is where today’s bloggy thing starts to lighten up. Because, no matter how depressed and frustrated I am at the moment, I’m much better off than the poor son of a bitch of our title. Let’s go to the movies.

Turner Classic Movies relieved some of my pain. Friday afternoon, it aired four monster movies. I recorded two of them. I have seen The Black Scorpion somewhere between a half-dozen and a dozen times since I first saw it as a kid when Ghoulardi (Ernie Anderson) ran it on his weekend movie show in Cleveland. I’d also seen Beast from Haunted Cave, but as an adult and only once.

The Black Scorpion is a movie of which I never tire, so recording it was a no-brainer. As for Beast, well, I didn’t remember much of it, so I figured I’d give it another go as well.

The Black Scorpion’s poor son of bitch doesn’t show up until near the end of the movie. It’ll be a while before I get to him. Here’s the Internet Movie Database summary:

Volcanic activity frees giant scorpions from the earth who wreak havoc in the rural countryside and eventually threaten Mexico City.

That pretty much covers it. Richard Denning, who was one of those sturdy heroic types and who appeared in several other monster films and lots of other movies, is geologist Hank Scott. He has come to study the volcano with fellow scientist Artur Ramos (Carlos Rivas). They come across scenes of destruction and an seemingly abandoned baby and a dead policeman. They hear strange sounds. They are both smart enough to make tracks out of there.

The next day, they resume their driving around the volcano-scarred region and rescue beautiful ranch owner Teresa Alvarez, played by Mara Corday, after her horse throws her. They drive her back to her ranch and accept her hospitality. They meet the annoying Juanito (Mario Navarro), who crushes on Hank and almost gets Hank and Artur killed a couple of times later in the film.

After dinner, everyone is having a fine time smoking cigarettes on account of they didn’t know about that whole cancer thing in 1957. Then the scorpions come, including the big one who this movie takes its name from.

Destruction. Dead cattle. Dead villagers. A trip to the area around the volcano to find where these ancient creatures are coming from. A trip down into a vast underground cavern where the scientists and stowaway Juanito get attacked by a giant trap spider and worm recovered from the King Kong cutting room floor, but given a second chance at cinema fame here. The scientists get a key photo that will play a major plot role soon. They survive. Juanito survives.

Blow up a mountain. Bury the scorpions. They find their way out and go to Mexico City where they wreck a Lionel train and eat a bunch of passengers. Blood lust seizes the biggest scorpion who kills all the others by stabbing them in that one vulnerable spot on their necks captured in the afore-mention photo.

Hank and Teresa go on a date. They both look exceptionally pretty. Hank wears an almost tuxedo. Teresa is in an evening gown with fur wrap. If this had been the era of free love, I think I would have done them both.

The military lures the Black Scorpion to a sports arena by loading meat onto a truck and driving it there. That’s when the master plan to off that big bug is supposed to go down.

I’m about to reveal the identity and the fate of the poor son of a bitch of our bloggy thing title. I wanted to give you a chance to reconsider not reading the spoilers and get up to speed before I do this next part.

Since bullets and tanks can’t stop the giant scorpion, the military plans to shoot a metallic arrow missile into that vulnerable spot and send 600,000 volts of electricity through the missile. It’s not a bad plan. Not really.

A Mexican marksman is manning the gun. Hank and Artur are next to him because they are the heroes, especially Hank. The arrow misses,  but sticks a bit in the creature’s shoulder. The military turn on the juice. The missile falls from the scorpion.

Okay, because we all know science, we know that much voltage would cause one heck of a spark and fry everything it its path. But this missile doesn’t do that.

The marksman pulls the missile back by its wire and picks it up to put it in the gun for a second shot. Except nobody thought to turn off the electricity. So the marksman, hereafter known as that poor son of a bitch, gets fried. Whoops!

Hank yells for the power to be turned off, reloads the missile and fires it into the scorpion’s weak spot. The big bug dies. Hank and Teresa walk away to have what I am sure was steamy and mutually satisfying sex.

The death of that poor son of a bitch haunted me as a kid. It was such a senseless and unexpected death. In all the decades since I first saw the movie, that’s the scene I recall perfectly whenever I think about this film. That guy. Just doing his job. Facing off against a giant man-eating scorpion. He bites the big one because he and everyone else forget to turn off the juice. It’s one of the most tragic monster movie deaths of them all.

The Black Scorpion was directed by Edward Ludwig. He was an actor in silent films and a writer. He directed a bunch of shorts, some John Wayne movies and a bunch of TV shows. He did not have a large budget, which is obvious in the scenes where the scorpions appear as totally black silhouettes. IMDb explain: It was because the money ran out when only the black backing for those composites (to prevent "bleed-through") had been accomplished.

The legendary Willis H. O'Brien was supervisor of special effects, assisted by Pete Peterson. Wah Chang was the uncredited creator of the scorpion puppet shown at the top of today’s bloggy. The shot of the scorpion with drool coming out of its month appears many times throughout the film. Eating peoples can get messy.

Despite my snarky comments, I have a fondness for this movie that overcomes any deficiencies in its production. The story ain’t bad. The actors are good. The monsters are kind of frightening. There’s a thrill to seeing creatures originally designed to appear in King Kong. It’s 88 minutes of fun. You could do a lot worse.

Since I’ve blathered on for something like 1700 words today, we’re going to discuss Beast from Haunted Cave tomorrow. However, on the bright side, I can guarantee I won’t be whining about my insurance problems when we resume.

Posted by Tony Isabella at 9:09 AM