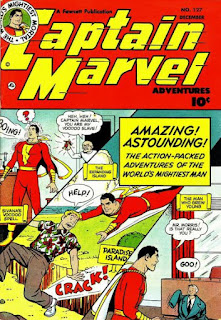 ﻿Super-heroes were in short supply in December of 1951, the month of
my birth.  There were only nine super-hero titles that month.  Four
of them featured Captain Marvel or members of his immediate family.
The other five starred Superman, Superboy, or Batman.

Captain Marvel Adventures #127 [December 1951] featured three tales
of the good Captain, all of them written by Otto Binder.  Two were
drawn by C.C. Beck and one by Pete Costanza.  Also appearing were
Waiting Waite, science-fiction hero Jon Jarl (in a Binder-written
text story), and Captain Kid.  I don’t know who Waiting Waite and
Captain Kid were.

“Sivana’s Voodoo Curse” is the only story from this issue that has
been reprinted.  It was in DC’s Limited Collectors’ Edition #C-27
[1974], one of those tabloid-size reprints that was just too large
for easy reading or storage.  But I remember Carl Gafford and other
friends of mine making much-needed extra money retouching them
and other reprints back in the day.

I’m getting a kick out of looking at these comics from the month of
my birth and I hope you are, too.  When I win Mega-Millions, I plan
to collect them all.

I’ll be taking you to some very dark places in this month’s bloggy
things, there being so many things that make me angry or just plain
sad.  But I don’t want to ignore the things that bring me great joy
as I make my way down an uncertain path, so I’ll be writing about
those things as well.

Marvel’s Fear Itself event, to put it lightly, didn’t bring me any
great joy...except when it most unexpectedly did.  The lead feature
in Fear Itself: The Home Front #1-7 [$3.99] was a Speedball serial
by Christos Gage with art by Mike Mayhew.  That’s Speedball as in
the whipping boy of Civil War and Fear Itself as in that brutally
soulless event that’s crushed the Marvel Universe for a year or so.
Imagine my surprise.

Speedball has been working in disguise as a volunteer for a group
formed by the mother of one of the kids who died in the Nitro-based
explosion that led to Civil War.  Speedball seeks atonement for his
part in that tragedy while Miriam Sharpe is the leader of something
called the Pro-Superhuman Registration Act movement.  They are the
most unlikely of allies and, indeed, the first chapter of the story
closes with Speedball’s cover identity blown and Sharpe’s followers
coming at him with any weapon they can grab.

What emerges is simply the best super-hero story of 2011.  Sharpe
is far from a one-note zealot, calling upon herself, Speedball, her
followers, and any one who can receive her broadcasts to help each
other in this time of terrifying crisis.  She becomes more than she
was and enables Speedball and others to become more than they were.
It is a vision for the Marvel Universe that I could wholeheartedly
embrace if I were working therein.  It’s that good.

Gage is Marvel’s best writer.  I hope the Marvel brass appreciates
him.  I hope he continues to write Marvel super-hero comics for a
long time to come.  When I was at the age when many kids put aside
their comic books, it was the Marvel super-hero comics that kept me
interested.  Though they may be few and far between, Marvel comics
like Fear Itself: The Home Front #1-7 remind me of those days and
fill me with hope for better days to come.

My comics reading habits have been erratic for decades.  There are
great titles I haven’t read in years and individual issues that got
overlooked.  One such overlooked issue was Simpsons Comics Presents
Bart Simpson #50 [2009], the first of many Bongo comics to feature
the work of Sergio Aragones.

What a fun comic this is!  The madness of the town of Springfield
coming together to work on “The Simpson Project” is a wacky delight
in which the humor builds and builds.  The “Maggie’s Crib” shorts
are classic Aragones pantomime.  “Big Top Flop” is a crazy day at
the circus which reminds me of a Little Rascals short, except that,
in this version, Spanky and his friends are logic-impaired juvenile
delinquents.  I may have giggled out loud while reading this issue.

There are so many things in comicdom that annoy, dismay, and even
anger me.  Thankfully, they can’t diminish my love for the comics
themselves.

Wherever I turn my head in my office, I see comics, manga, graphic
novels, books about comics, and magazines about comics...and they
excite me.  From my local library, there’s Kate Beaton’s brilliant
Hark! A Vagrant, Shigeru Mizuki’s Onwards Towards Our Noble Deaths,
and the moving and often frustrating I’ll Give It My All...Tomorrow
by Shunju Aono.  I’ll be reviewing all of them either here or in my
Comics Buyer’s Guide column.

Roy Thomas’ Alter Ego remains the finest magazine of comics history
I can imagine.  I’m diving into the three most recent issues this
week and weekend and learning something every time I turn a page.
No magazine beats AE’s interviews or its attention to accuracy and
detail as it examines comics history.

I’m rediscovering the wonder that is Jack Kirby’s Kamandi, a title
to which I hadn’t paid sufficient attention when it was published.
Maybe I was in mourning over the loss of New Gods, Forever
People, and Jack’s great take on Jimmy Olsen.

The Adventures of Superboy, reprinting the first Superboy stories
from More Fun and Adventure Comics, is downright charming.  Such a
pity the creation of the series also exposes the kind of treachery
common to so many comics publishers.  When I review it, I’ll look at
the good and bad of it.

McFarland and Company sent me a stack of their new graphic novels.
Best of the bunch is the wonderful Yellow Rose of Texas by Douglas
Brody and Joe Orsak.  Reviews of this and other McFarland graphic
novels are in the pipeline.

I’m excited about comics.  Most days, that overcomes my dismay at
the evil in the industry and in the world outside the industry.  I
write about both and will continue doing so.