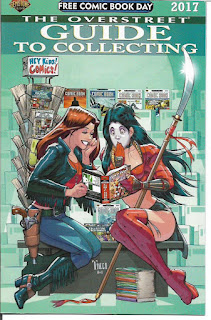 On a scale of zero to ten, each of those criteria is worth up to three points. Tony awards the elusive tenth point when he deems a FCBD offering particularly worthy.
The Overstreet Guide to Collecting [Gemstone Publishing] is a smart idea, especially for Free Comic Book Day when this issue will find its way into the hands of folks young and old who are just getting into the joy of collecting. From its amusing Billy Tucci cover of Wynonna Earp and Shi looking at the latest Comic Book Price Guide, through a five-page comics collecting introduction by J.C. Vaughn with artists Brendon and Brian Fraim and its concise, informative articles on several subjects, this is like unto a Rosetta Stone of fandom. The articles and comics include: Comic Book Pricing, Comic Book Ages, Collecting by Creator or Genre, Grading Comics, Original Comic Art, Movie Posters and more.

QUALITY: The writing, art and production are all first-rate. This is a nice-looking guide.

ACCESSIBILITY: The considerable information is presented in a very easy-to-grasp manner.

SALESMANSHIP: I’m thinking anyone who reads this mini-magazine and decides they want to start collecting comic books and related items will, at the least, want to buy the main Overstreet Guide to Comic Books and, depending on their interests, might consider the guides to grading, original art and horror as well. There are also a pair of full-age ads for archival supplies and professional comic-book grading. There’s also an ad for Pirates of the Caribbean: The Fast and the Spurious, but I won’t hold that against them.
SCORE: Ten out of ten points. 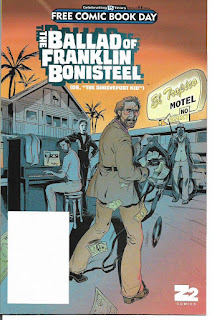 The Ballad of Franklin Bonisteel [Z2 Comics] leads off with the 22-page, black-and-white, done-in-one tale from whence this FCBD issue derives its title. That’s followed by a 6-page, full-color excerpt from a comic book or graphic novel or perhaps a collection called Murder Ballads.

The lead story is written by Gabe Soria with art by Warren Pleece. Piano player and accidental detective Pete Reyes is hired by former record producer Bonisteel to help him get payment from a rock star who stole Bonisteel’s songs. Reyes takes the job because Bonisteel owes him money and has promised to pay him that money with a good chunk of interest. It’s a solid story with interesting supporting characters. It’s well-written and well-drawn.

The Murder Ballads excerpt is likewise written by Soria with art by Paul Reinwand. The six pages don’t give me much of a leg up on what it’s about.

QUALITY: The lead story is first-rate and I enjoyed it a lot. The excerpt isn’t bad, but there’s not enough of it for me to form an opinion on its quality.

ACCESSIBILITY: The lead story provides the readers with everything  they need to know to follow. The excerpt fails in this area.

SALESMANSHIP: Based on the lead story, I’d be interesting in buying stories featuring Pete Reyes. But this giveaway comic book doesn’t give me a clue where I might find them. There’s a full-page ad for Murder Ballads, which doesn’t tell me what it is - ongoing comic, graphic novel, and so on - but which does reveal the whatever-it-is features an original soundtrack. This is terrible marketing, more the pity since the lead story is so good. 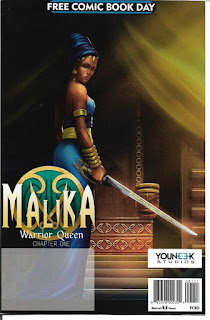 Malika Warrior Queen [YouNeek Studios] presents the first chapter of a graphic novel. Created and written by Roye Okupe and drawn by Chima Kalu, Malika is part of a shared universe of graphic novels.

QUALITY: Though the 20-page chapter could have used a little more background, it told an exciting story with likeable characters and vibrant actions. I liked it a lot.

ACCESSIBILITY: Almost any reader should be able to follow the story easily. Good panel-to-panel and page-to-page flow.

SALESMANSHIP: First-rate. The back cover makes it clear the entire graphic novel is on sale now. There is a explanation of the shared universe and full-page ads for the other graphic novels currently available. I’m going to be spending more money soon. 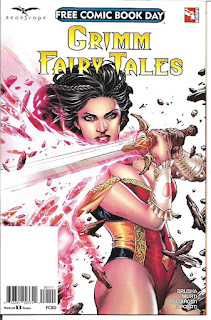 Grimm Fairy Tales [Zenescope] features three excerpts from longer stories and one complete short story. All are written by Zenescope president and  chief creative officer, all are set in an universe of four realms of power - Wonderland, Oz, Neverland and Myst - that surround Earth, the nexus of the universe. The short story and one of the excerpts feature Guardian of the Nexus Skye Mathers, taking that mantle from her late mother. The creatures and villains in the comic book are all drawn from fairy tales of one kind or another. Which makes sense given the title.

QUALITY: The writing ranges from decent to mediocre. The art is by a variety of artists and ranges from fair to quite good. Ditto the storytelling, though one of the excerpts is so poorly executed by the artist that, despite studying it for a good long while, I still can’t tell what happened on the excerpt’s final page.

ACCESSIBILITY: Good, but not quite. Skye Mathers is introduced in solid fashion. The first story in which she is not featured has a decent set-up. The excerpt mentioned above is impenetrable.

SALESMANSHIP: Very good. The Zenescope Universe is explained well. There are last-panel blurbs and full-page ads that make it easy to find more comics like this one.

JOHNNY DEPP TRIGGER WARNING BACK COVER: Yes, there is another FCBD  back cover ad for Pirates of the Caribbean: Why Must Johnny Depp Persecute Us? It doesn’t cost this comic any points. I just enjoy making fun of this movie.

SCORE: Five out of ten points. 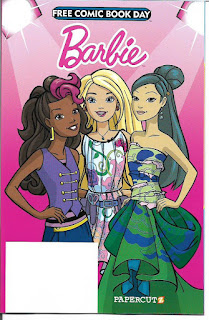 Barbie [Papercutz] has excerpts from two Barbie graphic novels. In Barbie: Fashion Superstar by writer Sarah Kuhn with artist Alitha Martinez, Barbie is an assistant to fashion designer legend Whitney Yang. Her friend Liz is a photography intern. Both are determined to prove themselves. The second excerpt is from Barbie Star Light Adventure: The Gems of Para-Den. Inspired by a Barbie movie, it is written by Tini Howard with art by Jules Rivera.

QUALITY: The Fashion Superstar excerpt is very good. It delivers an excellent message without being too obvious about. Both the art and storytelling are vibrant. I liked it a lot. Alas, the other excerpt is bland “magical girl” stuff that is way too heavy-handed when it comes to its message.

ACCESSIBILITY: The first story is a breeze to follow. The second is decent. One jarring note is that the inside front cover editorial references a third graphic novel of which this FCBD issue does not include an excerpt, though there is a back cover ad for all three Barbie graphic novel that included it.

SALESMANSHIP: Excellent. It’s clear from the editorial that these are excerpts to graphic novels and the back cover shows the covers of all three. Plus there is no ad for a movie starring Johnny Depp, saving me having to come up with another bogus title. 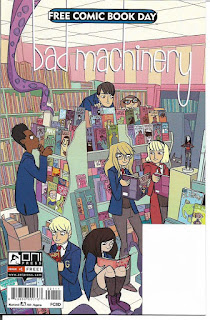 Bad Machinery [Oni Press] features a delightful FCBD-themed cover by British cartoonist John Allison and a 27-page excerpt from his The Case of the Forked Road. That’s the seventh volume in an award-winning series about three schoolgirl and three schoolboy sleuths who attend the same grammar school.

QUALITY: The story is taking its time to unfold, but there is some very funny banter, interesting female characters - we don’t see too much of the boys in this excerpt - and a mystery that isn’t clear. But I enjoyed the excerpt and will request the earlier volumes from my local library system.

ACCESSIBILITY: The inside front cover gives the basic setting. The story flows well and, though the nature of the mystery might not be clear so far, what we see is intriguing. I think most readers would be able to follow this easily.

SALESMANSHIP. Top marks. The inside front cover makes it clear that there is more to this story and the house ad has the covers of all seven volumes in the series. There is a back cover ad promoting $1 debut issues of ten different Oni titles. There is also an inside ad for that movie starring that actor.

I’m running behind this week, which is why Free Comic Book Friday is actually posting on Saturday. I blame that actor.

I’ll be back on Monday with something. I have no idea what. But I will be writing a bloggy thing. Come and visit on Monday and we’ll both find out what I wrote about.

Posted by Tony Isabella at 3:05 AM