MONSTERS FOR MY MONDAY 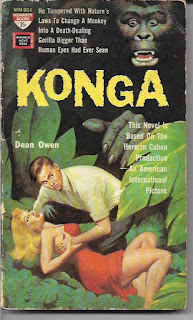 My preparation for my G-Fest panel on Gorgo, Konga and Reptilicus continues apace. After owning it for well over a decade, I finally read Konga [Monarch Books; 1960], the novelization of the movie by the prolific Dean Owen. I also watched Konga [1961] the movie, one of my least favorite giant monster flicks.

Presumed dead, Dr. Decker comes back from Africa. During the year he was “missing,” Decker came across a way of growing plants and animals to enormous size. He brings back a baby chimpanzee to test out his theory. As he has many enemies at home, he decides to use Konga to get rid of them. Then Konga grows to gigantic proportions and wreaks havoc all over the city of London!!

Konga the novelization is well-written pulp fiction with some sex scenes that would have shocked young Tony Isabella if he’d read it in 1960. Konga the movie is a dud with a gorilla suit as bad as the one Clarence Beeks [Paul Gleason] was sewn into in Trading Places [1983]. In fact, it might be the same suit.

The characters of note in Konga the novelization are all terrible people. Dr. Charles Decker is an egotistical sociopath willing to sacrifice anyone for his science and his libido. Margaret, who is his assistant, housekeeper and lover, wants desperately to be Mrs. Charles Decker and is willing to overlook his murders and, to a far lesser extent, his lust for one of his students. Of course, to get even with Decker, Margaret has a one-off with that comely student’s studly boyfriend.

Comely student Sandra doesn’t hide her attraction to Decker and is less than understanding of boyfriend Bob’s irritation with her for that. Bob tries to beat the crap out of the much older Decker and is threatened with expulsion from their college.

Decker’s professional colleagues are only slightly less horrible. Dean Foster is arrogant and obvious in his jealousy of Decker, and tries to force the doctor to resign his position. Professor Tagore, whose research mirrors Decker, taunts Decker with the knowledge he is going to publish his findings before Decker.

Little Konga is the only sympathetic character in the novel. He’s controlled by Decker and, near the novelization’s end, by Margaret, and forced to do their murderous bidding. He does not attain his gigantic size until the second last chapter when, enraged by Decker literally raping Sandra, Margaret gives him one dose to many of the scientist’s growth formula.

Margaret is crushed to death when Decker’s house and lab collapses around her and the expanding Konga. Sandra gets eaten by one of the scientist’s enormous flesh-eating plants.

Helpless in Konga’s hand, Decker dies when flung to the street as the military dispatches the giant gorilla with its tanks. In death, Konga shrinks back to chimpanzee size, his small body just inches away from that of his master.

The movie follows much the same plot as the novelization, but there are notable differences. Sandra and Bob are much nicer in the film. The young woman is fascinated by Decker’s intellect but is pretty much oblivious to his advances. One of the flesh-eating plants does trap her arm, but we don’t see her die on screen.

Bob does have a physical confrontation with Decker, but it is the lecherous scientist who starts the fight. In the book and the film, Konga murders Bob.

As in the novelization, Konga doesn’t grow to giant size until near the end of the movie. The film actually gets more boring once this happens because the relatively few scenes of destruction are badly done and because there is a lot of Konga walking around models of a town with a Decker doll in his hand while managing not to do much damage. It’s like he’s waiting for the military to get to the scene and have done with him.

An amusing note. In the novelization, Decker talks about the women of the African village where he stayed being so unashamed of their bodies that they went topless. In the movie, Decker shows his class a film of the village and remarks how the women always went around fully and modestly dressed.

My overall low opinion of Konga did not change with this viewing. It’s not a good movie. However, this time around, I was pleasantly surprised by how much I enjoyed the scenery-chewing performances of Michael Gough as Decker, Margo Johns as Margaret, Austin Trevor as Dean Foster and George Pastell as the sibilant Tagore. Still, the novelization is much better than the movie...and the Charlton comic books are incredibly better than both the novel and the movie. Even the issues not drawn by Steve Ditko. 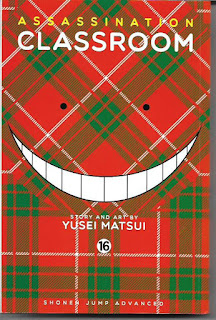 Yusei Matsui’s Assassination Classroom [Viz Media; $9.99] is one of my all-time favorite manga. The series revolves around an octopus-like creature who destroyed 70% of the moon and threatens to do the same to Earth in a year if he is not killed . In the meantime, Koro Sensei - the creature - becomes a middle-school teacher in charge of the lowest-ranked class at the school. He teaches them the usual subjects and assassination techniques to be used against him. The governments of the world have offered 100 million to whoever kills Koro Sensei. It is a series filled with outrageous humor, exciting action and undeniable heart as the despised students of class 3-E blossom under the guidance of their alien teacher.

Assassination Classroom Volume 16 is a game-changer. It reveals the true history of Koro Sensei, a history filled with surprises that I never saw coming and yet which make perfect sense to me. Having written professionally for four-and-a-half-decades, I am not often surprised so delightfully. With five more volumes to come, I’m more excited and impressed by this series than ever...and maybe a little jealous of those of you just starting this wonderful series. Even if you’re not a manga reader, I recommend Assassination Classroom to you. It is an outstanding comics epic. 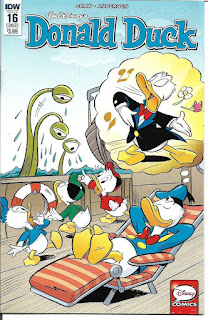 Donald Duck #16 [IDW; $3.99] has “The Call of C’Rruso!” by writers Mark and Laura Shaw and artist Flemming Anderson. The 37-page tale is the first USA publication of a story that originally appeared in the German comics publication Lustiges Taschenbuch.

What starts out as the ever-optimistic Donald attempting to win a singing competition continues with a magic atomizer that transforms his voice. However, before long, Donald, his nephews, and a pair of rivals are sailing into the frigid waters of Lovecraftian horror. One rival wants to save the world and the other wants to see it die in terror. The adventure is action-packed, funny and surprisingly scary in places. I like it a lot.

IDW is bringing some wonderful foreign-made Disney comics to this country. I’m enjoying their titles immensely. 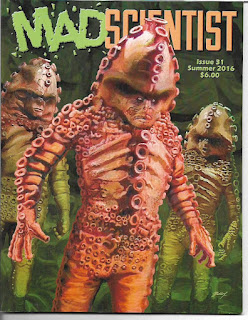 One more for the road.

Martin Arlt’s Mad Scientist [$6] is one of my favorite magazines. That I’ve just this weekend read the latest issue - Summer 2016 - should not be taken as any sign of disrespect. My life is a little crazy these days - no duh - and I’m trying to get to where I’m able to read at least the latest issues of my favorite magazines closer to when they are published. But I digress.

Mad Scientist is a 56-page, slick-looking journal of stuff Martin finds interesting. It’s one of my favorite magazines on account of I find that stuff interesting as well. The cover by the great Mark Maddox illustrates Martin’s article on the thirteenth season [1975-1976] of Doctor Who. It’s been ages since I’ve seen those episodes, but the article does a good job covering them and reminding me how much I wish I had the time to watch the entirety of Doctor Who from start to today. Sigh.

Martin also writes about The Thing from Another World, the landmark 1951 horror/sci-fi film about a bloodthirsty alien carrot preying on scientists in a frozen wasteland. That could be a metaphor for what’s happening to science today at the hands of ignoramuses like the Dumpster President and his Republican henchmen.

John LeMay writes about Toho Studios attempt to take a bite out of the Dracula legend so wonderfully done by England’s Hammer Studios. It’s a fascinating appraisal.

The learned and prolific Allen Debus contributes two great pieces. The first is on Mary Shelley’s other landmark horror/sci-fi novel and her other writings. The other is on Godzilla Raids Again, which was heavily edited and shown in the United States as Gigantis the Fire Monster. The Japanese version is one of my all-time favorite Godzilla movies because of the great human stories told alongside the giant monster mayhem.

Timothy Price writes about seeing monster films at the neighborhood theaters, something which brings me back to my own youth once I was old to go to the movies with my friends. Prior to that, I only got my kind of big screen monster thrills from the movies shown at Sts. Philip and James on Sunday afternoons in Cleveland, Ohio. The idea was to give parents a break from their offspring on their weekend day of rest...or to enable them to make more Catholic babies while we were watching Gorgo, War of the Worlds and the like.

But I keep digressing. That’s one of the terrific pleasures of Mad Scientist. It reminds me where I come from.

Last but not least, we get a single-page satire on why General Zod would make a really great president. It’s a startling premise, but Mike Dimesa makes his silly case and makes me laugh as he does so.

For more information on this highly recommended magazine, you can e-mail Martin. You’ll be happy you did.

That’s it for now. If my plans work out, as they occasionally do, I’ll be back tomorrow with a review of a major movie. See you then.

Posted by Tony Isabella at 9:16 AM