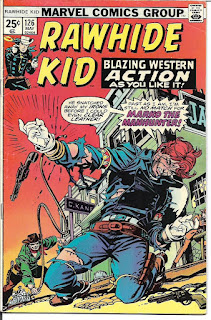 The Rawhide Kid is my favorite western comics character and one of my favorite comics characters period.  Something about the short of stature - but big on courage, honor and fighting skills - Johnny Clay speaks to me.  After rereading the Kid’s earliest adventures when Marvel reprinted them in a pair of Marvel Masterworks and an Essential Rawhide Kid volume, I wanted to reacquire every Rawhide Kid comic, reread them and write about them in this bloggy thing of mine. We’re currently in the extended twilight of the title. We’ve seen the last new Rawhide Kid story that will appear in the title, which is now a bimonthly reprint. This is the 113th installment in my “Rawhide Kid Wednesday” series.

We’re looking at The Rawhide Kid #126 [May 1975], which has a new cover penciled and inked by Gil Kane. His name even appears on that sign in the background. 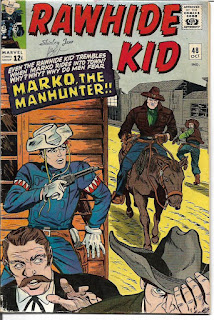 This issue reprints “The Bounty Hunter” (17 pages) from Rawhide Kid #48 [October 1965]. The story was written and drawn by Larry Lieber with the uncredited inks attributed to Frank Giacoia. The original cover was penciled and possibly inked by Lieber. 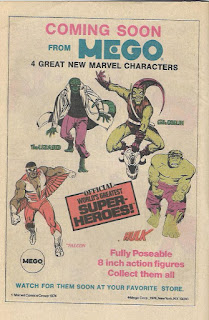 Ads for Marvel merchandise were on the rise around this time. Mego announced four “great new Marvel characters”: The Lizard, The Green Goblin, the Falcon and the Hulk. All of the images shown here were taken from comics or covers drawn by Steve Ditko, Sal Buscema and Herb Trimpe. 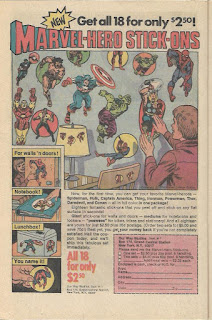 Our Way Studios would send fans 18 Marvel-Hero Stick-Ons for only $2.50 plus 35 cents postage. Two sets were $4.50 plus fifty cents postage. Additional sets were $2.25 each and, apparently, there was no extra postage charge. 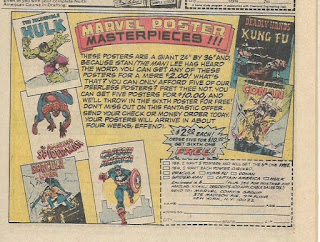 The Marvel Poster Masterpieces, mentioned previously, were back in a half-page ad. 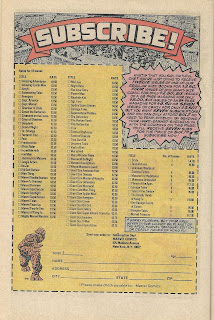 Marvel’s subscription department had a full-page ad offering subs to 74 different comics titles, 11 different magazine titles and the Marvel Treasury editions. If you want to know why Marvel began to go off the rails about this time, you need only look at this insane production schedule.

This issue’s “Marvel Bullpen Bulletins” page was about as boring as the feature would ever get. “Stan Lee’s Soapbox” was a lackluster effort plugging mostly stuff he had plugged before. The “news items” read like a directory of Marvel staffers. While I’m sure those fine folks appreciated seeing their names in print, I can’t imagine the readers were all that keen about it.

The best and only real “news item” on the page was about how Bill Mantlo rescued a pair of senior citizens on his wedding day. I was there at Ft. Tyron Park at the Cloisters, though I only witnessed the aftermath of Bill’s heroic feat. When the driver-less bus with the two seniors started rolling downhill, Bill jumped into the bus and stopped it before it smashed into a brick wall.

The last item on the page was a coded message to Foom (Friends of Ol’ Marvel) members who knew the Captain America code from the 8th issue of FOOM Magazine. The message read:

I’ll award a bloggy no-prize to the first reader who successfully translates the above for code-impaired Tony.

Both beloved and ridiculed, the Hostess snack treats advertisements in comics form began appearing and would continue to run in comic books into the 1980s. They are among the most frequently parodied  comics features and every generation of comics creators add a few more pages to the ongoing archives. 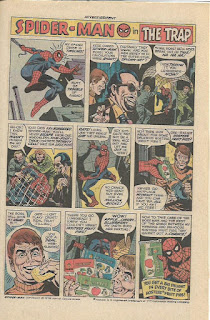 This issue, Spider-Man appeared in “The Trap.” Captured by clever criminals, Spidey bribes his way to freedom by offering delicious Hostess Fruit Pies to the dim-witted Lunkhead. The page was drawn by Ross Andru. My guess for the page’s inker(s) is Mike Esposito, Frank Giacoia or both. My two Italian "uncles" often worked together on various things.
I searched the Internet in vain, but couldn’t find writing credits for this page. Admittedly, I could only afford to search for a few  minutes. My vague memories of those long-ago times tells me the ads were usually written by editors or staffers. I have an even more vague memory that the writers and artists were paid a higher than standard rate for their work on them, which would have made sense if Marvel (and other publishers) were billing Hostess for the work. It was common for editors, especially at Marvel, to assign such choice gigs to themselves. 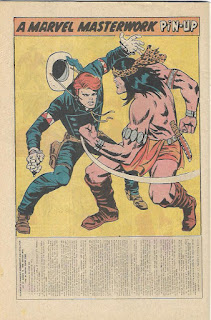 The last editorial material in this issue was a “Marvel Masterworks Pin-Up” taken from the cover of Rawhide Kid #74 [February 1970]. Drawn by Larry Lieber with inks by John Tartaglione, the “pin-up” took up 80% of the page. The other 20% of the page was occupied by the annual Statement of Ownership, Management and Circulation that never seemed to show up every year.

Legend has it that these numbers were pretty much conjured out of thin air for the annual statements. But, if those numbers are even close to the actual circulation, The Rawhide Kid was selling better in 1975 than most of today’s Marvel comic books. Sigh.

That’s all for today’s “Rawhide Kid Wednesday,” but it will return  next week with a new installment. As for me, I’ll be back tomorrow with some quick looks at the just-completed seasons of several of your favorite comics-inspired TV series. See you then.

Posted by Tony Isabella at 4:47 AM