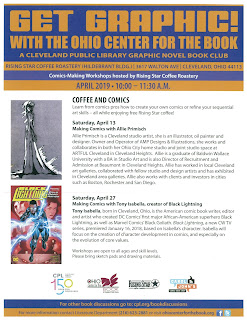 I love comics. I love making comics. I love reading comics. I love talking about comics. Every now and then, someone asks me to talk about comics somewhere other than at a convention or online. Like the “Coffee and Comics” storytelling workshop I’ll be doing for the Ohio Center for the Book in conjunction with the Cleveland Public Library. It happens on Saturday, April 27, 10:00-11:30 am at the Rising Star Coffee Roastery, 3617 Walton Avenue in Cleveland, Ohio.

Comics are a visual medium. A comics writer must know how to write a script for an artist and the artist has to know how to turn that script into art that carries the story through however many panels and pages said story requires.

For this workshop, I’m going to provide my “students” with random script pages for comics stories in various genres. At the moment, I plan to write pages for a super-hero story, a horror story and a romance/slice-of-life story.

While I answer questions about comics storytelling, the artists in the class will be asked to rough out a page layout. I don’t expect anyone to finish penciling a page in an hour-and-a-half, but that rough layout should be doable. Of course, where this workshop gets more interesting is what happens next.

Members of the workshop will be encouraged to e-mail their finished pages to me. I’ll be going over every “submission” with the intent of hiring one of these artists to draw an eight-page story for me. I don’t know where the completed story will appear, but the artist I choose will be paid the admittedly low rate of $50 a page for the work. I’ll retain all rights to the work, but that initial $50 page rate will be considered an advance against any future money earned by the completed story. If you come to my workshop and do the work, you could end up as a published artist.

Outside of these appearances, I’m sticking close to home for the rest of April, May and, perhaps, even June. I have a comics script to write for an educational institution; three years’ worth of one of my favorite comic strips to read; an introduction to write for the collection of the aforementioned comic strips; pitches to write for a medium new to me; and a somewhat personal book to write. In between the above, I’ll be working on and holding my Vast Accumulation of Stuff garage sales.

Here is the most current version of my appearance and garage sales schedule for the rest of the year...

Some notes on the above:

My Coffee and Comics workshop. I’ll have Isabella-written stuff for sale. As always, I don’t charge for my signature on items purchased from me. However, as will be rare from here on in, I’ll also sign Isabella items you bring to the workshop for free.

Free Comic Book Day. I’ll have Isabella-written stuff for sale at Rubber City Comics. In keeping with the spirit of FCBD, I’ll sign other Isabella items for free as well. Keep in mind that there are items I won’t sign, such as any of DC’s current “Black Lightning as the Batman’s support Negro” comic books.

Garage sales. As long as folks don’t take advantage of my generous nature, I’ll sign Isabella items you bring to the sales for free. But don’t be a dick about it. Buy some stuff.

G-Fest. That’s more my vacation convention than a working one. If you let me know in advance that you want to purchase something from me, I’ll bring it to the event. Depending on what I’m doing at the time, I’ll also sign other Isabella stuff for free.

Comic-Con International. I’m still not sure why I’m going to this convention, though I’m sure I’ll enjoying appearing on some panels, making new friends and reconnecting with old friends. I don’t plan on signing at the convention, but, if I do, it’ll be for a worthy charity or to bring some traffic to a friend’s booth. I suppose if Marvel asks me to sign at their booth or if there’s some specific Black Lightning event that doesn’t include writers and editors who don’t understand the character, I’ll also sign there. Within these limited parameters, I’ll be signing for free. But, if I’m signing for a worthy charity, don’t be a dick. Toss a few bucks into the collection jar.

I will be charging for my signature at NEO Comic Con, New Mexico Comic Expo and the Grand Rapids Comic-Con.

I’m not a guest at the Flaming River Con. I’m attending to show my support for the comics LGBTQ+ community. In that spirit, I’ll sign Isabella stuff for free there.

If you’d like to hire me, you must e-mail me. See above.

I don’t mind an initial face-to-face conversation or a phone call. But e-mail will still be how we seal the deal.

Posted by Tony Isabella at 7:00 AM