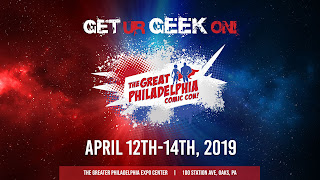 My next convention appearance will be The Great Philadelphia Comic Con on April 12-14 at the Greater Philadelphia Expo Center, 100 Station Avenue, Oaks, Pennsylvania. From the show website, here is the event’s mission statement:

The Great Philadelphia Comic Con! is dedicated to producing celebrations of comics and pop-culture by providing unique access to talented artists and a family-friendly experience for fans of all ages. Our show motto “Get UR Geek On!” represents the diverse and unique nature of our fans – be they fans of Comics, Movies, TV, Anime, Gaming, Cosplay or more.

The show hours are:

The media guest list is impressive with multiple performers from a bunch of great TV shows: The Expanse, Battlestar Galactica, Star Trek Deep Space Nine (my personal favorite Star Trek show), iZombie and others. The legendary Alice Cooper will be there, as will Nick Frost and John Wesley Shipp.

The Great Philadelphia Comic Con will also feature cosplay, gaming, panels, discussions, workshops, photo opps, and the incredible Kids Zone by Incredikidz. The Inkwell Awards, which promote and educate about the art of comic book inking and show recognition for inking  artists, will be awarded on Friday afternoon at 5 pm.

John Wesley Shipp, the Flash of two Flash TV series will be sharing his memories of both shows and answering questions on Friday from 2-3pm. Someone should ask him about his truly memorable performances on the legendary NYPD Blue where he played an officer on steroids. I enjoyed the original Flash series, but it was NYPD Blue that made me a Shipp fan for life.

Other interesting panels and events include a Cosplay Dating Game Show on Saturday, a Black Panther question and answer session that same day, and a Tony Isabella question and answer session in Panel Room 2 on Sunday from noon to 1:00 pm. While there might be a few questions I can’t answer due to non-disclosure agreements, I pride myself on answering even the hardest questions.

During the show, I’ll be in a booth at the head of the show. With Saintly Wife Barb there to help me out, I’ll be selling a variety of Isabella-related and other items as well as signing comics and other things for the fans. We’ll be debuting my spiffy designed-by-Thom-Zahler banner at this convention. It’s sweet!

I plan to bring all four of the Black Lightning trades to the show. I’ll also have July 1963: A Pivotal Month in the Comic-Book Life of Tony Isabella Volume One; two different Black Lightning posters; Daredevil and Luke Cage mini-posters; and a few copies of my script for Black Lightning: Cold Dead Hands #1. Space permitting, I'll be selling Beano and Commando issues from England.

Photos are free.
After a winter that just wouldn’t go away, Barb and I are looking forward to our trip to Pennsylvania. We’re going to visit Hershey  on our way to Philadelphia and then, doubtless bloated with candy,  we’ll make our way to the convention.

If you want more information on the Great Philadelphia Comic Con, head over to the event’s website. That should have the answers to your questions.

I’ll be offline until sometime after we return from Philadelphia. Check back here then for much more bloggy thing fun.

Posted by Tony Isabella at 4:19 PM