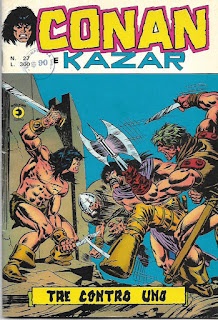 My next Vast Accumulation of Stuff garage sale will be tomorrow and Saturday, June 7 and 8, at my home: 840 Damon Drive, Medina, Ohio. The sale hours are 9 am to 1 pm each day.

One of the most enjoyable aspects of these garage sales for me is going through long unopened boxes of stuff and finding cool items. Today I’m going to share one of those items with you.

Conan e Kazar was published by Italy’s Editoriale Corno. The title ran 44 issues from 19 Marzo 1975 to 10 Novembre 1976. According to the Grand Comics Database, the publishing format of this comic book was serie mensile poi quattordicinale, which roughly translates to monthly series then fourteen. As you can tell, it reprints Marvel Comics stories from the 1970s.

Why is this full-color Italian comic book in my Vast Accumulation of Stuff? I’m getting to that. 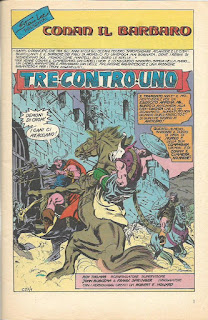 There are three stories in this issue. Conan il Barbaro is the lead feature. “Tre-Contro-Uno” (Three Against One) reprints “Brothers of the Blade” by Roy Thomas with pencil art by John Buscema and inks by Frank Springer. It’s an 18-page story. 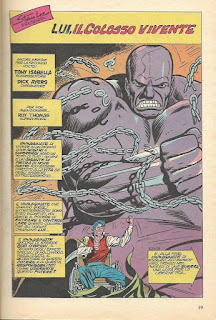 Next up is the reason someone sent me this book many decades ago. From Astonishing Tales #22 [February 1974]. Lui, il Colosso Vivente (He, the Living Colossus) stars in the 19-page “...Noi, i Fenomeni” (We, the Phenomena). Or, as it appeared in the original American version, It! The Living Colossus in “...We, the Gargoyles!”

The writer of the story was Tony Isabella aka me. Dick Ayers drew and inked the new pages. To expand this story from my allotted 15 pages, I cobbled together four additional pages from "Gorgolla! The Living Gargoyle!!" [Strange Tales #74; April 1960]. I always tried to give my readers as much story as I could, even if it meant some extra work for me and the production department.

NOTE: I get a kick out of finding foreign language reprints of my stories. If you come across away, e-mail me and maybe we can work out some sort of deal, be it cash or trade.

With a title like Conan e Kazar, one would think the third feature in this comic book word be Kazar. That’s not the case. 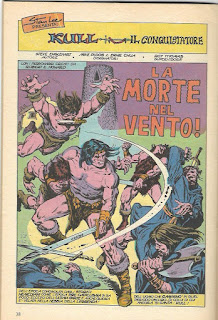 Kull the Conquistatore (Kull the Conqueror) stars in “La Morte Nel Vento” (“Death in the Wind”) by Steve Englehart with Mike Ploog on the pencils and Ernie Chan on the inks. This story originally ran as “Wings of the Night-Beast!” in Kull The Destroyer #15 [August 1974]. It’s a 12-page story. 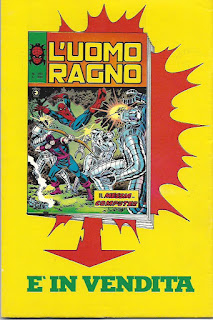 The back cover of this issue is an advertisement for L’Uomo Ragno [Spiderman] #153. My first thought was that this reprints an issue of Marvel Team-Up, but I was able to pin the cover to any specific issue. If any of my bloggy readers can identify the cover/issue, I will say wonderful things about them in a future bloggy.

That’s all for now. I’ll be devoting most of today to getting ready for my garage sale. However...

I will be back soon with more stuff.