RETURN OF THE GARAGE SALE 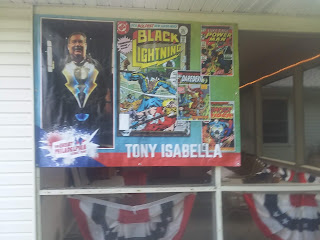 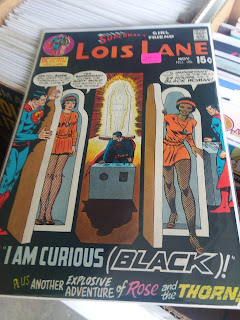 My next Vast Accumulation of Stuff garage sale will be Friday and Saturday, June 7 and 8, from 9 am to 1 pm each day. The location is my home at 840 Damon Drive, Medina, OH

My first sale of the summer was a tremendous success. I made 136% of my two-day goal. I had wonderful conversations with customers and friends. I saw a great many fans excited about their bargain-priced purchases. It was a fun and profitable weekend all around.

Some of my biggest sellers were the more expensive (but still very cheap) older comics. As I expected, the Lois Lane issues from the 1960s did very well. Some of those issues, including the infamous “I Am Curious...Black” issue, will still be available this weekend. You’ll also find issues of Marvel’s Collectors Item Classics, just to name one more title. More will be added.

My stuff always does well at these sales. I sold a number of Black Lightning trades along with individual issues of Black Lightning: Cold Dead Hands. Isabella-adjacent books like Gorgo Vs. Konga (with an introduction by me) and Scooby-Doo Team-Up (guest-starring Black Lightning) also sold briskly.

Last weekend’s garage sales also saw the debut of the exclusive-to-me Marvel’s Greatest Creators: Tony Isabella #1 variant edition of the first appearance of Misty Knight. Selling at $10, it features a cover showing Misty in action for the first time and is limited to 1000 signed and numbered copies. Copies #101-110 were available at the garage sale; #101 and #106 sold.

If you’d like to order one of these exclusive signed and numbered comics, the cost is $20 for U.S. residents. If you’re ordering from outside the country, I’ll need to adjust the price accordingly. For more details, e-mail me.

I sold out of the Commando digests within the first hour of sales. Commando is a British war comic that covers all the modern-day wars with the occasional foray into the distant past or even the future. I’m several months behind on this weekly title and try to read at least one a day, so you’ll see a few new issues in upcoming garage sales. Don’t expect them to last long.

What didn’t sell? Collectible phones, manga and posters. The phones are always unpredictable. I’ve had customers come in and buy almost every one on display. If the phones don’t sell at their already low prices, I drop the prices even more for the next sale.

The manga volumes are priced at fifty cents each. I’m not sure that I sold any of them during my first sale. However, like the phones, some customer will show up and buy stacks of them. Which is a good thing since I just discovered a few more boxes of them.

The posters are pretty cool. The double-sided Superman poster that I conceived for Cleveland’s International Superman Expo of 1988 is a steady seller. I’m down to my last two dozen of that one. Other available posters include three different Black Lightning posters, one drawn by local artist Dan Gorman; a Hawkman poster, also drawn by Gorman; and mini-posters featuring Daredevil and Luke Cage. The mini-posters are reproductions of covers of issues I wrote of those titles. Like some of the other items, customers tend to buy several posters at once.

Other sale items include: Black Lightning pins at six bucks each; 1000 Comic Books You Must Read; July 1963: A Pivotal Month in the Comic-Book Life of Tony Isabella; our popular mystery boxes at $10 each; and the British weekly Beano at a mere ten cents per issue.

What else will be available depends on what I discover in the many boxes scattered throughout the four corners of my house. I’m always finding terrific items and pricing them to sell.

One more thing. My garage sales are currently the only venue where I sign comic books and other Isabella items for free. I don’t mind signing items you’ve brought from home. That said, you don’t want to be that ungrateful comics fan who comes for the free signatures and doesn’t buy anything. I do a mean stink-eye.

Life has been chaotic for me for most of the year. But I’m working hard at getting back on track, reducing stress in my life, giving myself more personal time. Thanks for your encouragement online and your support of my garage sales locally. It helps a great deal more than you realize.

Posted by Tony Isabella at 9:04 PM