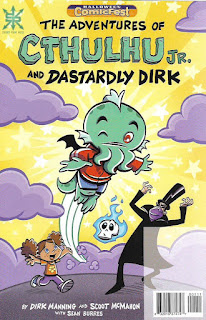 This is the third column in a series reviewing the special comics given out by comics retailers for Halloween Comicfest. In the first two columns, I covered all the digest-size issues created for the event. Now we’re moving on to the traditional-size comics.

Halloween ComicFest, the comic book industry’s premiere fall event, is a day when participating comic book specialty shops across North America and around the world give away specially published comic books absolutely free to anyone who comes into their shops. HCF is the perfect event to experience comic shops as destinations for Halloween and horror-themed comic books, collectibles and other merchandise! In other words, Halloween ComicFest is the Spooky Free Comic Book Day!

These Halloween Comicfest comics were sent to me by my dear friends at Stormwatch Comics in West Berlin, New Jersey. When I write about these comic books, I look at three areas.

The Adventures of Cthulhu Jr. and Dastardly Dirk from Source Point Press is one of the most fun giveaways, especially if you know my pal Dirk Manning who created and wrote it with artist Scoot McMahon and colorist Sean Burres. The premise is that family man Manning is hoping to join an evil organization and become a premiere villain. This shocked the heck out of me because, prior to this comic book, the only indicator that Dirk was evil was his unholy mastery of karaoke. The 22-page story introduces Junior in its final pages.

QUALITY: What’s not to like? It’s an entertaining story that made me laugh. I think most readers will enjoy it.

ACCESSIBILITY: Everything you need to know to understand this story is in the story. Which is how it should be.

SALESMANSHIP: Very good. Four pages of ads and an inside back cover that shows the characters and identifies them.

FINAL SCORE: Ten points out of a possible ten points. 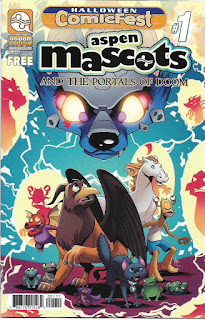 Aspen Mascots and the Portals of Doom #1 [Aspen Comics] is 32 pages of comics and activities - puzzles and the like - by writer Vince Hernandez with artist Alex Arizmendi.

QUALITY: This is excellent stuff. The story flows well through the comics pages and the attendant activities. Terrific fun for young readers.

ACCESSIBILITY: Aye, there’s the rub. As charming as the characters are, readers are given no background on them whatsoever. A page of two of “our cast” would have been helpful.

SALESMANSHIP: Poor. The back cover ad shows dozens of Aspen graphic novels at a ridiculously small size and none of them seem remotely appropriate for the younger readers of this giveaway comic. 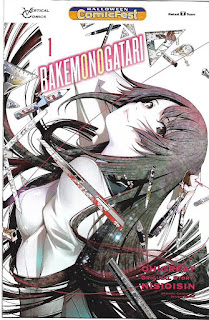 Bakemonogatari [Vertical Comics] features the first chapter of the manga series starring Koyomi Araragi. He’s a high school student, once turned into a vampire and then cured, who retains some powers, such as superhuman healing and enhanced vision. He tries to help others who suffer from supernatural maladies. I tell you all this because there’s no hint of his back story in this comic.

QUALITY: Illustrated by the humble Oh!Great from the original story by Nisioisin, this first chapter is engaging enough that I took to the Internet to learn more about the character.

ACCESSIBILITY: Poor. As I said above, I had to go online to learn basic information that should have been available in this giveaway comic book.

SALESMANSHIP: Good. The final interior page advertises the initial volumes in the series. The back cover advertises Imperfect Girl, another Nisioisin story. I’m going to see if my library can get me both of these series. 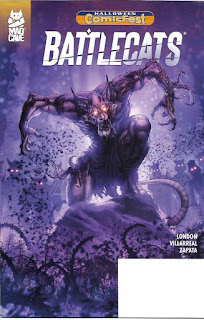 Battlecats [Mad Cave] didn’t feature the current heroes, but a 20-page story of some earlier version of the team. That struck me as an odd decision for the publisher to make.

QUALITY: Okay. The writing was average at best. The art was better, but the over-rendering and unsure storytelling hurt that as well.

ACCESSIBILITY: Not awful, but not great either. There’s an inside front cover paragraph that sets up the story, but, on more than one occasion, I felt lost.

SALESMANSHIP: Excellent. There were full-page ads for several other Mad Cave titles with enough information to give a readers an idea of what those titles are about. 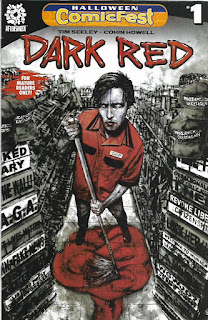 Dark Red #1 [Aftershock] contains a 20-page, black-and-white story by Tim Seeley with art by Corin Howell. Protagonist Chip works in a small town convenience store...and he’s a vampire. His need for blood is satisfied by Evie, a human woman whose body produces too much blood. Complications arise because Evie wants to go to the big city and because other vampires have invaded Chip’s turf.

QUALITY: This is a terrific opening to what I assume is an ongoing comics series. Writing and art are first-rate. Chip and Evie are interesting character. The other vampires? My jury of one is still out on them. But I will be checking out the series.

ACCESSIBILITY: Clear storytelling from both the writer and artist makes getting into this story a breeze.

SALESMANSHIP: Excellent. There are several pages of house ads for Aftershock titles and they contain enough information for a reader to decide if they’d like to check them out.

I’ve more Halloween ComicFest reviews to come. With a little luck, I’ll get through the rest of the free comics between now and early January. In the meantime...

Tomorrow will be a special “Tony Isabella’s Birthday” bloggy thing. Expect much whining on account of I’m old and diabetic. Which means no birthday cake for me. See you then.