HAPPY BIRTHDAY TO ME 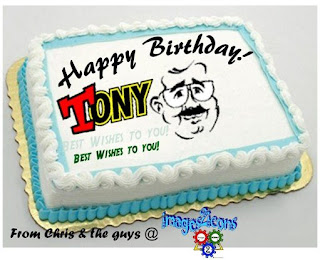 Tony “the Tiger” Isabella was born on December 22, 1951, making him 68 years old today. He’s still trying to decide what he wants to be when he grows up.

I had this health scare a few weeks ago. For months, it seemed like I had little to no energy. I chalked it up to convention exhaustion after doing well over a dozen of them this year. I tried to tell myself it was frustration over a comics industry that almost never makes any logical sense. I considered seasonal depression, but that would mean Ohio had seasons that showed up on schedule and didn’t overlap on each other. I opined that the destruction of democracy by our IMPOTUS - Impeached President of the United States - and the Republicans was weighing heavily on me. I even thought my lethargy might simply be a matter of my getting on in years.

Ultimately, my blurred vision and other unpleasant symptoms got me to ask Saintly Wife Barb to take me to an emergency room. The staff was caring, efficient, friendly and professional. They took blood and blood pressure. They conferred. Then the smiling Doctor Scheky came in for his drop-the-mic moment.

DOCTOR: Are you diabetic?

DOCTOR: Well, you are now!

I have been diagnosed as a type 2 diabetic. At its height, my blood sugar reading was 550. Today, my average reading is under 150 and the last reading I took before writing this bloggy thing was 123. There have been ups and down, and I won’t pretend I haven’t had really bad emotional moments along the way, though they stopped short of my contemplating death by doughnut.

I went cold turkey on everything that makes life worth living. No, no, I exaggerate for effect. I gave up Pepsi and other such drinks. I did so immediately. That’s something I never thought I’d be able to do. I assumed my body was at least 20% carbonated beverages. I guess I was wrong about that, too.

I gave up potato chips and other snacks. I gave up all fast food. I mostly gave up pizza. (The personal size DiGiorno’s Thin Crust Cheese Pizza comes in within my carbohydrate limits.) I haven’t had Chinese food since I went to the ER, but I hope someday I will be able to enjoy that again. I stopped eating white bread and eat very little bread at all. Mostly whole grain. It’s been a struggle, but I have it on good authority that there are a great many people who approve of my continued existence. I wouldn’t want to disappoint them.

I’m losing weight. I’m under 200 pounds for the first time in one or two decades. There’s a possibility that, soon, clothes that have never fit me, may fit me. If not, I’ll have to go shopping for new clothes. Barb is eager to have me do this.

I can’t say my energy is wholly back, but it’s much higher than it has been in months. I’ve started writing again and hope to resume my usual workload by the end of the year.

When I started this bloggy thing, I planned to discuss the things I hope to accomplish in the new year. I think I’ll save that for my New Year’s Day column.

In closing, I’m damn glad to be here for my 68th birthday. As far as a birthday cake goes, I think I’m allowed to look at pictures of birthday cakes online. Please understand that my licking the screen is not a kink of some sort.

I’m also damn grateful for the love and support of my Saintly Wife, my kids Ed and Kelly, my friends here in Ohio and online. I could not maintain my positive attitude without all of you.

Posted by Tony Isabella at 5:23 AM