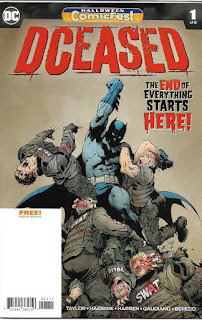 This is the fourth column in a series reviewing the special comics given out by comics retailers for Halloween Comicfest. In the first two columns, I covered all the digest-size issues created for the event. Now weve moved on to the traditional-size comics.

Halloween ComicFest...the comic book industry’s premiere fall event – a single day when participating comic book specialty shops across North America and around the world give away specially published comic books absolutely free to anyone who comes into their shops. HCF is the perfect event to experience comic shops as destinations for Halloween and horror-themed comic books, collectibles and other merchandise! In other words, Halloween ComicFest is the Spooky Free Comic Book Day!

These Halloween Comicfest comics were sent to me by my dear friends at Stormwatch Comics in West Berlin, New Jersey. When I write about these comic books, I look at three areas.

We begin with a truly awful comic book from a publisher who should know better but doesn’t...

ACCESSIBILITY: It’s not difficult to follow the story. Which is not a blessing in this case.

SALESMANSHIP: Very good. There are ten pages of house ads for other DC Comics books, including a two-page spread for the current “Year of the Villain” crossover event. Because why should we have super-hero titles that actually focus on the super-heroes the titles are named for. Why that would be crazy.

SCORE: Six points out of a possible ten points, but that’s strictly based on the accessibility and salesmanship. Hold your nose while you walk away from this one. 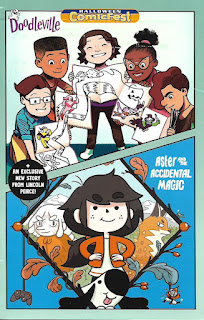 Doodleville/Aster and the Accidental Magic [Penguin Random House] contains excerpts from both of those graphic novels as well as an “exclusive new story from Lincoln Peirce,” the creator of the Big Nate comic strip and books. All of these stories are intended for younger readers.

QUALITY: Pretty good. The basic concepts are interesting. However, the brief excerpts don’t compel as well as longer samples might have. The Big Nate short story is fun.

ACCESSIBILITY: Not as good as it could have been. The Doodleville excerpt stops just as it’s getting good and before we learn what we need to do about the apparently living doodles. The Aster excerpt gets bogged down by exposition near its end.

SALESMANSHIP: Good. There are house ads for these three titles and some other Penguin Random House books. The inside covers, front and back, are blank. That’s a horrible waste of space. 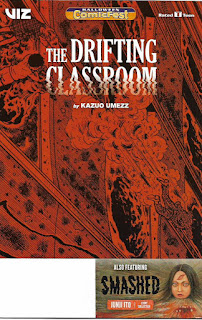 I was not a stranger to the lead feature in Viz’s The Drifting Classroom/Smashed Halloween ComicFest giveaway. I had a few volumes of Kazuo Umezz’s tale of a school mysteriously transported to some alien hostile place. Also in this comic was an excerpt from Junji Ito’s anthology of horror stories.

QUALITY: Both excerpts are well-done. However, I don’t believe The Drifting Classroom excerpt would have hooked me if I hadn’t already read a few volumes of the series.

ACCESSIBILITY: Good, but not outstanding. As you probably gathered from my above remarks, I think The Drifting Classroom segment was not as effective as it could have been.

SALESMANSHIP: Okay. The back cover has an advertisement for these two series. 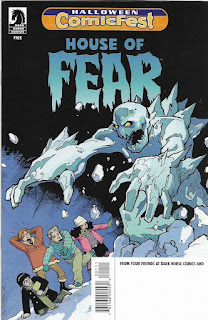 I enjoyed House of Fear: Attack of the Killer Snowmen [Dark House], which featured a 26-page story written by James Powell with art by Jethro Morales and Mike Erandio, colors by Josh Jensen and letters by Matt Krotzer.

QUALITY: This was a fun and suitable for all ages story. Top marks to the creative crew. I’m going to try to a copy of the anthology from my local library system.

ACCESSIBILITY: It was easy for a reader to get into this fun combo of adventure, horror and humor.

SALESMANSHIP: Very good. There’s a house ad for the anthology and several house ads for other Dark Horse publications. 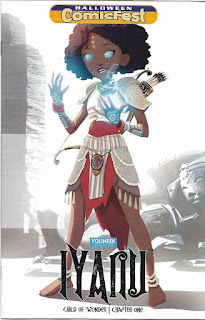 Iyanu: Child of Wonder Chapter One [Youneek Studios] features a 26-page story about a remarkable child, considered an outcast by the very people her mother and her try to protect. Inspired by African history, Iyanu was created and written by Roye Okupe, who is also Youneek’s art director. It’s drawn by Godwin Akpan and lettered by Spoof Comics.

QUALITY: Excellent. The writing and the art are first-rate. I want to read more about Iyanu.

ACCESSIBILITY. Excellent with one glitch. The English translations of some speech balloon are given in captions placed at the bottom of panels. But the captions are so small and the text is printed in white letters on colored backgrounds that they are nigh-impossible to read, even with a magnifying glass.

SALESMANSHIP: Poor. While the back cover ad talks about the Youneek Youniverse, there aren’t any mentions of individual graphic novels. To get information about where to find more Iyanu, you have to go to the publisher’s website.