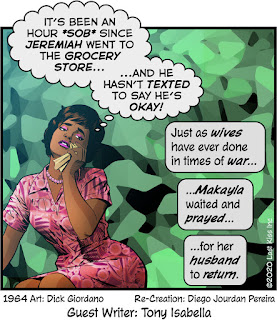 John Lustig’s Last Kiss is a syndicated comics feature wherein John takes random panels from old mostly romance comics out of context and adds funny dialogue to them. He’s been writing these gags for around fifteen years. At last year’s San Diego Comic-Con, he asked me to start writing gags for him; it has been one of the best and most fun gigs of my career.

John still does most of the writing with one of my gags appearing once a week. John is a terrific editor who has never tried to make me into a mini-John. Unlike every other syndicated comic strip or feature I’ve written for, my byline appears on every gag I write. I’ll be a part of the Last Kiss family as long as John can tolerate my often odd takes on his format.

Recently, one of my gags turned out to be more meaningful than we  anticipated. Because our country, already stressful because of the Covid-19 pandemic, has become more so with the increased coverage and recognition of systemic racist police violence. The Last Kiss at the top of this page was posted on May 29.

Let me start by explaining how I work on Last Kiss. John sends me a batch of panels that have been expertly and wonderfully recreated by Diego Jourdan Pereira. In this case, the original image was by the legendary Dick Giordano from Sweethearts #77 [Charlton; June 1964]. It was scanned from the publisher’s black & white stat, made in preparation for the printed color cover.

When John sends me these panels, usually a couple dozen at a time,  I print them out and, one by one, use magnets to affix them to the side of the file cabinet to the left of my keyboard. As I do other work, I look at the panel du jour frequently. Sometimes a gag comes to mind immediately, sometimes it takes a few days. 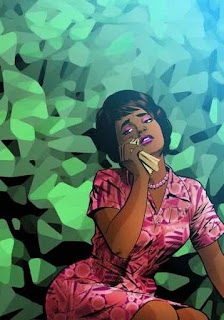 When I wrote the “gag” for this panel, it was after the image had been on my file cabinet for a few days. Being deep into sheltering-at-home, the Covid-19 pandemic was uppermost in my thoughts. Quite honestly, it was a struggle to come up with gags that didn’t center on pandemic-related life. I tossed two or three gags of that type for every one I submitted to John.

It was when the orange-tinted Bunker Boy referred to himself as a wartime president, that I found what I needed. I looked at Makayla and thought of all the wartime wives and girlfriends who waited at home during too many wars, wondering if they would ever see their loved ones again. I wrote this:

WOMAN (thought): It’s been an hour *sob* since Jeremiah went to the grocery store...

CAPTION: Just as wives have ever done in times of war...

CAPTION: ...for her husband to return.

I went for poignant instead of hilarious. I thought it worked and John agreed. Just before the panel ran, George Floyd was brutally murdered by a police officer.

Our panel became even more poignant. Our readers realized too many wives have waited for the returns of their black husbands, worried some chance encounter with police might end as horribly as it did for George Floyd and countless other people of color. Even though I had written the panel, I was not immune to its impact in a nation that appears to have finally had enough of police brutality and is raising its collective voices to demand change in how the police operate and how they are held accountable for their crimes against unarmed citizens.

My 2017 Black Lightning: Cold Dead Hands series is now available on the DC Universe app. The social issues I wrote about there are even more pertinent today than they were then. Sadly, this does not come as a surprise to me.

I am not anti-cop. I love cop fiction like Ed McBain’s magnificent 87th Precinct novels or TV series like Hill Street Blues and NYPD Blue. However, I am opposed to bad cops. I think they make things more difficult for citizens and their fellow cops...and I believe that when good cops look the other way or support those bad cops, they become bad cops themselves.

When we talk about a few bad apples among police officers, we too often forget that cliche continues to reveal that those bad apples spoil the bunch. Rot spreads.

Every now and then, something John or I write for Last Kiss will anger a reader to the point where they claim they will never read the feature again. Sometimes we recognize that possibility. Other times the anger baffles us.

The risks come with the territory. But, they often also come with great creative satisfaction and the welcome support of our readers.  Some risks are worth taking.