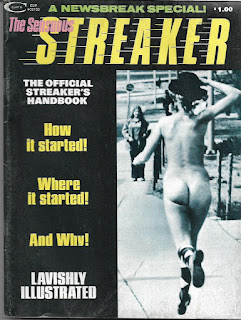 The Sensuous Streaker was published by Magazine Management in 1974. As you probably know, that was Marvel’s parent company back then. I saw a mention of this magazine online somewhere and it struck me as something familiar. Had I worked on this “Newsbreak Special” or seen it lying around the office? I’ll warn you now I don’t have a definite answer to that question.

Written by Harold Flender, The Sensuous Streaker is a 66-page love letter to the 1970s fad. When I did a search on the name, I found a man who had written for Carl Reiner, Woody Allen, Sid Caesar and Jackie Gleason, and whose other books seem way too highbrow for him to have been associated with this particular publication. From what little information I found about him, he passed in 1975. I found no mention of this magazine.

The magazine is fun and includes all sorts of amusing facts about streaking through the centuries. It’s got a light tone that serves the material well and copious grainy photographs to accompany the prose. Because I could not shake the feeling that I might have had something to do with it, I went to Amazon and ordered the only copy available from the vendor. With tax and shipping, it cost me a fat $20.16. That might have been a bargain.

Since I sometimes did non-Marvel jobs for Sol Brodsky, who did odd jobs for Magazine Management, it’s possible I did some editing and proofreading on this magazine. Reading it, I can see where I might have punched up a joke or two, or smoothed out an awkward sentence. I would not have done much. It’s an entertaining and well-written publication. But I have no concrete memory of this, only a nagging feeling I might have been involved in some small manner.

It’s just as likely that I saw the magazine on Sol’s desk and gave it a quick read. I know I did that with some of the infamous “men’s magazines” published by Magazine Management.

When I did a quick eBay search on The Sensuous Streaker, I found a single copy (SENSUOUS STREAKER #1 Marvel Magazine Low Print & RARE CGC NM- 9.2) at a "buy it now" price of $249. When I did an advanced search, I found another copy (Sensuous Streaker #1 hard to find Curtis/Marvel magazine from 1974 photos) that had sold for $74.99. My copy isn’t near mint, but it looks to be in at least as good a condition as the copy that sold.

I could include The Sensuous Streaker in my “written by me” files to confuse future scholars studying my works, but, as I said, I am far from certain I worked on this magazine. I’ll probably offer it for sale on eBay or at my garage sales.

Keep watching the bloggy thing for more mini-blogs as I work back to writing full-scale columns. Be safe and sane.