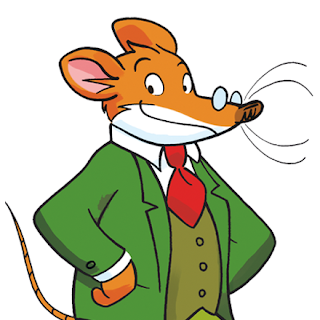 The [Medina] Gazette recently published special sections honoring the 2020 graduations of Medina High School and other area high schools. Most of the entries for the top students of each high school listed their favorite books and movies. Of particular interest to me was which genre books or movies were named by these students.


In the books arena, the Harry Potter series was mentioned three times with the Divergent and Percy Jackson series getting two mentions. The Hitchhiker's Guide to the Galaxy and the Hunger Games series were named by two other students.Only one kind of sort of graphic novel series was named.

Geronimo Stilton is an Italian children's book series. Although the series credits its title character as  author, the true author is Elisabetta Dami. On older novels, the copyright is issued to a pseudonym "Geronimo Stilton"; this was changed on newer books.

The student was likely referring to the actual books. However, since PaperCutz has been translating and publishing the graphic novels featuring the character, I'm hoping those were what the students considered his favorite books.

Comic-book characters did much better when it came to the favorite movies question. Five of the top students mentioned Avengers and other Marvel Cinematic Universe movies. Other students named the Harry Potter movies, The Incredibles and Star WarsL The Force Awakens.

Look for more of these mini-blogs in the days and weeks to come. I've been lax on providing content here and this is one way I'll be addressing this.