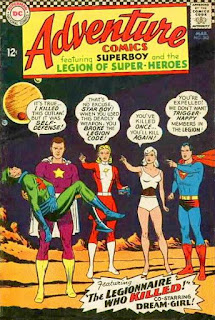 Today’s entry features a pitch I wrote for DC Comics during what I will forever think of as “my mercifully brief time on staff at DC Comics.” Although, in all honesty, I may have written this after I resigned from my absurd position as “story editor” at that outfit. My memory isn’t crystal-clear on the timing.

I do recall that Jack C. Harris, my editor on Black Lightning and a good friend and a good man, was involved in this. There are some hard-written notations on the pitch that aren’t my writing. Logic dictates that, had this title gone forward, Jack would have edited it. After he reads today’s bloggy thing, which he’ll be seeing at essentially the same time as you will, Jack may have some thoughts of his own to share. Maybe we’ll do a crossover between my blog and his excellent My Favorite Comic Books.

One thing I learned/suspected during my time at DC Comics was that publisher Jenette Kahn seemed to like Marvel comic books better than DC comic books. Not that she didn’t love the DC characters. They are, after all, wonderful characters when handled properly and with understanding of their core values. But, in the late 1960s and early 1970s, the Marvel books were better. That would even out as writers and artists moved from company to company like attendees of a swingers party.

In 1976, I could usually get Jenette’s attention by telling her a pitch was like a DC version of some Marvel title. Once again, my memory might be a bit off, but I might have suggested this series would be like a DC version of The Punisher. I do recall I thought of it as a futuristic galactic take of my own Black Lightning. Something I don’t recall sharing with her or Jack.

Whew! Well, that was certainly a long introduction to this recreation of my 1976 proposal to take a member of the Legion of Super-Heroes and make him a star!

Presenting all-new wonder and excitement in THE LEGION OF SUPER-HEROES tradition. The Interstellar Adventures of...

The Time:
The 30th Century! One thousand years in our own fantastic future!

The Place:
Metropolis! Capital of the Earth! Central hub of the mighty United Planets!

Here is where the Science Police, the peace-keeping force of the United Planets, maintain their mighty headquarters fortress. With a storage of knowledge that makes them famous throughout the galaxy for their ability to keep order, the Science Police is most proud of their young auxiliary...THE LEGION OF SUPER-HEROES!

Banded together by multi-trillionaire R.J. Brande, the LEGION is comprised of super-powered youth from multiple planets. Each young hero has proven worthy of membership in the group by displaying a super-power unequaled by any other member. With these matchless powers, the LEGION aids the Science Police in their efforts against the forces of evil that still threaten the galaxy a thousand years from our own day.

The LEGION’s ranks are filled with the most powerful teens in the universe. Lightning Lad! Saturn Girl! Cosmic Boy! Shadow Lass! And many others. Joined in the common cause of justice, the LEGION has sworn to uphold the law without undue force. Most sacred to the group is their honor code against killing! But one time - and only one time - this code was broken.

Thom Kallor was born in an orbiting space-observatory. His parents were astronomers from the planet Xanthu. Due to the unusual place where he was born...a “starlight” research center...the boy’s body developed the ability to draw mass from the stars and impose that mass upon anything, making that object or person incredibly heavy.

In his later years, Thom piloted a one-man space ship through the tail of a comet that temporarily gave him the power of electrical vision and other abilities similar to those of SUPERBOY. With these powers, he joined the LEGION OF SUPER-HEROES.

When his temporary powers failed, Thom, or STAR BOY as he was now known, proved his mass-increasing ability was also an asset to the LEGION. He was allowed to remain on the team.

Then came a black day for Thom and the LEGION. In self-defense, he killed a man. In a dramatic trail, STAR BOY became the first hero to be expelled from the LEGION.

[I pause here to make some observations. Looking at some of my odd word choices, some of which I’ve changed for this presentation, I wrote this pitch very quickly and likely with some input from Jack. My best guess is that I wrote it while I was still a story editor and during either a lunch break or a rare afternoon when I wasn’t working on titles assigned to me, meeting with a writer, or doing jobs tossed on my desk by the editorial coordinator.

The often-menial tasks were on other people’s titles. Normally, I wouldn’t have objected to helping out in this manner. I was a team player at Marvel where my fellow staffers and I often pitched in to get books ready for the printer. This was different. This was the editorial coordinator’s putting me in my place, once interrupting a script conference with one of my writers to proofread one of his letters pages. He was dismissive of the writer’s time, forcing him to wait while I did the proofreading. That was one of many factors that led me to quit my staff job within six months.

In reading this 44-year-old pitch, I noticed that I sometimes wrote STAR BOY and other times wrote STARBOY. I don’t recall if Jack and I weren’t certain of which version we wanted or disagreed on which version to use. Whatever the reason, I have chosen to go with STAR BOY for this presentation.]

After many months and once again proving his worth, STAR BOY was readmitted to the group. Also readmitted was his girlfriend DREAM GIRL. A native of the planet Naltor, she has the power to predict the future in her dreams.

And what is the future for STAR BOY and DREAM GIRL?

Deep within the shadows of 30th Century Metropolis, danger lurks. A secret underground empire seeking to overthrow the United Planets  and replace with its own evil rule. Contemptible men of Earth and their alien allies plot unspeakable deeds in the ultra-modern city. Diplomatic ploys and subversion are their weapons. The LEGION and the Science Police are almost powerless against them.

With evil cunning, the underground empire kidnaps DREAM GIRL. They want to force her to predict the political waves of the universe. With their political puppets in power at the right time and places, they could conquer the universe!

Now the life of STAR BOY changes! Turning to his LEGION friends, he seeks their aid in rescuing DREAM GIRL from the underground empire. But the LEGION is helpless. Interference in even this situation could cause an interplanetary incident that would rock the United Planets! They cannot help.
Angered and embittered, STAR BOY seeks to rescue DREAM GIRL on his own...and fails! His single super-power is not enough to battle the overwhelming forces his enemies command. Worse, to avenge STAR BOY opposing them, the underground empire turns their ultimate weapon on his home planet of Xanthu, wiping out every man, woman and child on that distant world.

STAR BOY stands alone. Because of his failure, all the people he called his own are dead. The girl he loves is still in the clutches of an incredible powerful alien force.

[Let’s pause once more. It just now occurred to me that, well over a year before STAR WARS debuted, I had the underground empire wipe out an entire planet. And this was and is uncharacteristic of me. I don’t like reducing large groups of people to statistics. In my stories, death is usually smaller and more personal. Yet here I was wiping out an entire world. I can only assume that DC Comics was a horrible influence on me.

Another influence shows up here, albeit magnified. I was a big fan of Don Pendleton’s MACK BOLAN THE EXECUTIONER series. Bolan became a mob-slaughtering vigilante after most of his family died because of his dad’s being in debt to the Mafia. Over at Marvel, Bolan also inspired the PUNISHER. I still remember seeing several Executioner paperbacks on John Romita’s desk when he was designing the facial features of Frank Castle.]

Thom again appeals to the LEGION to fight the underground empire. To the death if need be. The Legionnaires refuse, citing their code against killing.

Desperately alone, STAR BOY seeks power from the very stars which gave him his name. He locates the comet that gave him his Superboy-like powers. Half-mad from his long journey in his one-man craft, he again exposes himself to the strange energies of that celestial body. Energies that alter and change him. Energies which mutate him in a drastically different way than before. From the heart of this uncanny shooting star, a new being emerges.

Now empowered with a greater density-increasing power that he can turn on himself, STAR BOY has added indestructibility and a star-spawned strength that surpasses that of Superboy to his abilities. He no longer needs his flight-ring. He can fly through the stars. He’s also regained his mysterious electrical vision.

Now begins his one-man quest of vengeance against the underground empire. One super-powered teen against a network of cunning alien and human killers from the farthest reaches of space.

Expelled from the LEGION, alienated from the Science Police and the United Planet, STAR BOY stands alone to mete out galactic justice to villains who can topple worlds.

Will he succeed? Can one single hero outwit the underground empire and survive against such immensely powerful forces? If any one hero can win this seemingly endless war, that person is...

I hope you found this pitch from the past entertaining. As I have gone through my file cabinets, I have uncovered many such pitches and other documents which fit under the fifty-years-in-the-making umbrella that is THE UNRESOLVED TONY ISABELLA. Expect to see more of these in the coming weeks and months.

Stay safe and sane, my friends.

Posted by Tony Isabella at 9:41 AM