BATMAN THE WORLD...IS NOT ENOUGH If you’re a devoted of nuance-challenged rumor and gossip websites, you may well believe I hate Batman. Except Batman was my favorite comics hero when I was a kid and what I hate is how DC’s shock-and-awe editorial directions have turned my childhood icon into one of the most toxic characters in comics. Well that and DC’s foul habit of making Black Lightning subservient to Batman.

Reality is me reading more Batman comic books than almost any other mainstream headliner. Because I’m always hoping for DC to finally figure Batman out. Because I’m always looking for Batman material I’ll enjoy, such as Batman and Robin and Howard, an excellent kids graphic novel by Jeffrey Brown.

Batman the World [$24.99] is a collection of fourteen stories from fourteen countries and fourteen creative teams. The countries are the US, France, Spain, Italy, Germany, the Czech Republic, Russia,  Turkey, Poland, Mexico, Brazil, South Korea, China and Japan. Some of the writers and artists have worked in American comics. Others are new to our nation’s comics industry. The US offering is by far the weakest story in the hardcover anthology, but the other tales are, at the very least, interesting.

While I won’t go story by story, the ones I found most intriguing and entertaining were those that most firmly embraced their nation of origin in style and subject matter. When I say Batman the World is not enough, it’s because I want to see more from these global  creative teams.

Since there is apparently no limit to how many Batman comics DC is willing to publish, I’d like to suggest an ongoing Batman the World title. Maybe a series of 48-page issues that would give the various creators more room to work with. Maybe, as with the Legends of the Dark Knight series of the past, an ongoing title that would devote multiple issues to a Batman story by a creative team. I think such an effort would sell well around the world. Even someone like me, who reportedly hates Batman, would buy that title.

I can hear you thinking, “Tony, why are you giving terrific ideas to DC Comics for free?” Well, you may have noticed that I am often critical of DC Comics. It’s subtle, but it’s there. I feel I should balance that with suggestions to make the company better. To lead them out of their self-imposed darkness. 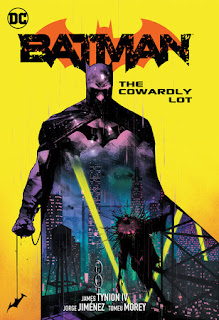 Via my local library system, I’m catching up on the recent Batman series. Batman Vol. 4: The Cowardly Lot by James Tynion IV, Jorge Jimenez and Tomeu Morey [$24.99] collects Batman #106-111 as well as material from Infinite Frontier #1. It’s not the most accessible of runs, but I’m managing.

The things I liked included Batman being somewhat better than he’s been; Barbara Gordon having her cake and eating it too by operating  as both Oracle and one of three Batgirls; and Tynion navigating the
uncomfortable notion of Harley Quinn as former murderer and current would-be hero. As much as I love redemption stories, Harley’s has been tough to swallow. But there’s something about the character, most definitely including that she is also a victim, that allows me to enjoy her journey.

The things I didn’t like included yet another evil politician with his own brutal agenda for Gotham City and the extreme brutality of these stories. I’m not wild about the Ghost-Maker, mostly because I think he represents another bad choice by a Batman who still does not have his act together. I’m just a bit less not wild about the Unsanity Collective...because in a real world that includes QAnon and other offshoots of the criminal Republican Party, the idea of a group trying to convince Gotham’s citizens to alter their basic perceptions of reality doesn’t seem that outlandish.

I don’t love these current Batman comics. I find them readable at best. But I’m hoping the series and the title character are moving towards a better version of my old favorite. 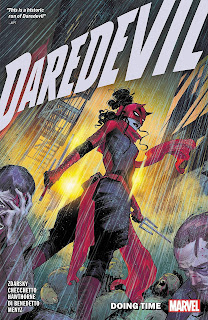 I’m also using my library to catch up on various Marvel comic-book series. I’ve been enjoying Daredevil by Chip Zdarsky, even though elements of it confuse and frighten me. Mike Murdock is an actual person? The Kingpin is mayor of New York? Elektra is rich enough to outbid Tony Stark and essential buy Hell’s Kitchen?

I just read Daredevil by Chip Zdarsky Vol. 6: Doing Time [$15.99], which collects Daredevil #26-32 from the series that began in 2019. Here’s the Amazon summary, which does contain some spoilers:

A new Daredevil rises to protect Hell’s Kitchen! Matt Murdock is in jail — but while he’s serving his time in his masked guise, his home is left without a guardian devil. That is, until Elektra Natchios takes it upon herself to protect Murdock’s neighborhood — and his legacy — and dons a new look as the Woman Without Fear! But the new Daredevil has her work cut out for her: Wilson Fisk remains seated as New York’s mayor, with Typhoid Mary, the Owl, Hammerhead and other lethal villains at his beck and call…and that’s before Knull, the terrifying King in Black, plunges the world into darkness! Elektra may be in over her head for the first time in her life — while Matt must find the strength to continue the fight as all hell breaks loose in prison!

I like most of what is going on the book. Matt is trying to make a point by serving time for killing an innocent man, but that might not have been his best course of action. Elektra is trying to live by Matt’s code of honor regarding killing people and that has been fun and a little inspirational.

The series does get upended for an issue or so by the monumentally moronic “King in Black” event. I’m not a fan of such events as they tend to derail even terrific titles. I prefer Daredevil and other titles to stay in their own lines. However, these silly things do seem to create temporary sales spikes for Marvel and, much as I’d like to see them go away, we’ll almost certainly keep seeing two or three of them a year. Sigh.

That’s all for tonight. I’ll be back as soon as possible with more news, views and reviews.

Posted by Tony Isabella at 8:58 PM