HAWKMAN AND OTHER GHOSTS 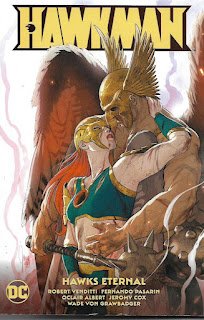 Once again, my local library system has provided me with material for this blog. We’ll start with Hawkman Vol. 4: Hawks Eternal (DC; $19.99) by writer Robert Venditti with pencillers Fernando Pasarin, Marco Castiello and Marcio Takara. This trade paperback collects Hawkman #20-29, the conclusion of the most recent series. This is not a review per se.

Venditti’s writing on the series was excellent. I was impressed by how he tied all the various versions of Hawkman together. However, at the same time, I wondered why that was necessary. DC sheds its continuities with the regularly of snakes shedding their skins. Most of the time, DC’s brilliant notion of the day doesn’t even get the core values of its classic characters right. Venditti’s Hawkman fell well within the range of what I considered acceptable for Hawkman, but there were still problems for me.

The Hawkworld mini-series, of which I’ve never been a fan, turned Hawkman into a murderer. The Venditti series starts with the notion that Hawkman is a mass murderer seeking redemption for the billions of lives he snuffed out. I love a good redemption story, but this one always had that hovering over it.

Hawkman is condemned to reincarnate until he balances the scales by saving as many people as he slaughtered. He’s committed to this and his sincerity in following this quest is one of the more positive
aspects of this series. However, near the end of the series, it’s revealed the absolutely irredeemable entity he blindly followed in his mass-murdering days, is one of his earlier incarnations. Which makes no sense to me whatsoever because that means two of Hawkman’s incarnations were active at the same time.

Artistically, this most recent Hawkman series was at its best when drawn by Bryan Hitch. That was choice. None of the artists who came after him came close to the high standard he set. However, while I found some of the storytelling from the later artists to be jagged, the actual drawing was always decent.

The finale of this series struck me as rushed. Which doesn’t come as a surprise. I’d opine that Venditti was told to wrap things up quickly and did the best he could. Which wasn’t bad, but which was not as satisfying as it could have been. I give him credit for his efforts. When I was faced with the similar choice, I bailed on my Hawkman series. Predictably, my editor ended my storyline in a way that still strikes me as one of the stupidest editorial decisions in my nearly half-century in comics.

I am often asked what I would do with Hawkman if I were offered the assignment again. This would only happen in a parallel world where DC Comics actually valued my skills. But I have thought about it. Here’s what I came up with:

I would NOT return to my 1980s Hawkman run and attempt to make it right...with the exception of working with artist Richard Howell again. One of the best and the most underrated Hawkman pencillers. That ship sailed three decades ago.

I would restore Hawkman’s core values. I like the idea of an alien lawman and his wife coming to Earth to track a super-villain. Or maybe a Thanagarian freedom fighter. Or maybe their own rebellious offspring.

I like the idea that they would want to stay on Earth even after they achieved their goals. Maybe the super-villain would be given asylum by a country seeing him as an asset. Maybe they would come to recognize their home planet as a repressive power. Maybe they would stay to protect their child.

I love their use of ancient weapons and their concerns their own advanced technology would be harmful to our development. However, let’s consider that most Earth weapons could be considered ancient by Thanagarian standards, thus expanding what the Hawks could use as they fought evil on our planet.

I’m not sure how I’d work the whole police commissioner covers for them and puts them in charge of a museum stuff, but I’m confident I could find a way to make it logical in today’s world. Because I’m just that good.

In my new Hawkman series, I’d create new villains and, in different  ways, reintroduce the best of the previous Hawkman foes. I’d forge alliances between the Hawks and any other heroes that make sense without them all being members of the Justice League members. For me, the League is a flawed organization. I have no love for it and would try to avoid it as much as I could. I would involve the Hawks in matters earthly, extraterrestrial and supernatural. But I’m also a writer who likes my super-heroes connected to the real world as much as possible...because it makes the fantastic stuff more believable.

The above is pretty much off the cuff. If you’d like to see such a Hawkman series, all you really have to do is buy DC Comics, hire me and let me use my wings. 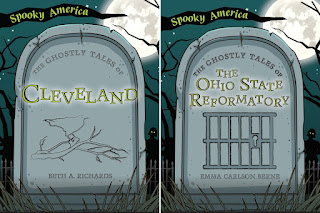 Two other recent reads from my library were The Ghostly Tales of Cleveland by Beth A. Richards (adapted from Haunted Cleveland by Richards and Chuck L. Gore) and The Ghostly Tales of the Ohio State Reformatory by Emma Carlson Berne (adapted from The Haunted History of the Ohio State Reformatory by Sherri Blake). Priced at $12.99 each, the chapter books were published by Arcadia Children's Books. I didn’t realize they were children’s books when I requested them, but they still proved useful to me.

I’m slowly developing a new super-hero universe unlike any you’ve seen before. One of my early decisions was to place the series in my Cleveland birthplace, just as I had done with Black Lightning: Cold Dead Hands. If my plans come to fruition, you will definitely see - stripped of their DC Comics associations - some of what I’d planned had I’d been able to continue writing new Black Lightning comics. I’ll be buying a copy of Haunted Cleveland in the very near future. Tax-deductible research material.

Though intended for younger readers and not just eternally youthful writers like myself, these Spooky America books suggested elements I can incorporate into my new universe. I was especially thrilled to read that Cleveland’s Variety Theater, where I’d seen countless movies as a kid, harbors a great many ghosts. That discover seems like fate to me.

If you have young kids who enjoy true-life ghost stories, they will enjoy these books. And when they’re sleeping, you can borrow them.

Posted by Tony Isabella at 1:56 PM