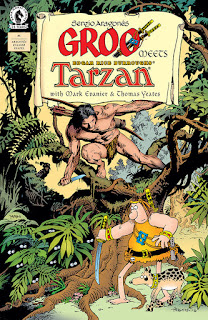 The four-issue Groo Meets Tarzan by Sergio Aragones, Mark Evanier and Thomas Yeates [Dark Horse; $3.99 each] is the most awkward Groo crossover to date. It bounces back and forth between the adventures of Sergio and the title concept. All Groo adventures are somewhat unreal, but this one seems more so than usual.

We open at the non-existent 2021 Comic-Con in San Diego. I’m such a pro at not being invited to Comic-Con I can’t even get invited to  fictional Comic-Cons invented by friends of mine. I’m not even in any of the complex crowd scenes drawn by Aragones. I have a speech all ready if I win any awards, but I’m thinking I should run it in an upcoming blog so people can “enjoy” it while I’m still among the living. Anyway...

Sergio is excited about the Groo-Tarzan project, so much so that he goes to the dilapidated Chula Vista Jungle Safari to study animals there. This will lead to considerable hilarity, but I don’t want to give away any of the gags. Meanwhile, Mark is hosting dozens of panels while trying to find time to search for the missing Sergio.

We also get what I assume are Sergio’s dreams of what the Groo and Tarzan meeting will be like. The frequently cut to Groo being Groo and Tarzan being Tarzan before they meet. All of the Tarzan scenes and images are drawn by Yeates and they are pretty darn gorgeous.When the two characters meet, Groo is clueless and Tarzan is very confused. But the Lord of the Jungle does manage to accomplish his mission with some insane help from Groo.

I’m not a big fan of crossovers. Several times during these issues, the script makes light of crossovers. This crossover works for me because it’s knowingly silly. The next time DC or Marvel decides to launch one of their massive crossover events in their respective universes, events which will inevitably turn out to me dumb, they should hire Sergio and Mark to do them. Heck, Sergio is fast enough to do the crossover and its spinoff issues and Mark...just needs a shove like this to go completely mad.

I got a kick out of Groo Meets Tarzan. Groo fans will love it and Tarzan fans will be entertainingly confused. My wife and kids will be sad that I wasn’t invited to Comic-Con 2021, but they should be used to that by now.

Groo Meets Tarzan [$19.99] will be collected in a trade paperback, scheduled to be published in March, 2022. 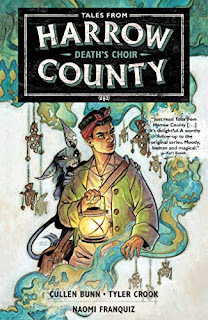 Ten years have passed since Emmy exited Harrow County, leaving her close friend Bernice as steward of the supernatural home. But World War II is in full swing, taking Harrow's young men and leaving the community more vulnerable than ever--and when a ghostly choir heralds the resurrection of the dead, Bernice must find a solution before the town is overrun.

Bernice has grown into her own heroine and drives this story. She is compassionate and courageous as she fights for her loved ones.As with the original series, there is serious supernatural peril. There are moments of often-bittersweet love and longing. There is a feeling that this has happened for real in the past, a reality enhanced by Bunn’s moody writing and Franquiz’s drawings. It has a satisfying ending that definitely opens the door for more Harrow County tales. I want to read them all. 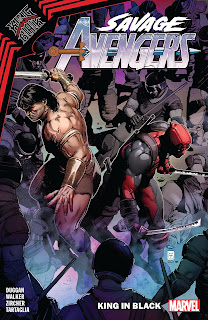 Marvel’s Savage Avengers is coming to an end and I will miss this goofy series, which has basically consisted of Conan teaming with other “Avengers” to fight sorcerers and such in our modern times. I’m not even sure if Conan is actually an Avenger or if the title was chosen for sales appeal. I’m not even sure if his teammates are Avengers. I am sure I don’t actually care.

Savage Avengers Vol. 4: King In Black [$17.99] is written by Gerry  Duggan with art by Kev Walker and Patch Zircher. It collects issues #17-22. It’s part of the “King in Black” event, but, since one of the members of the team is a symbiote, it doesn’t bother me as much as other parts of the event. From the back cover:

Conan is imprisoned on Ryker’s Island — but he promptly breaks out with the help of Deadpool! The taciturn barbarian and the Merc with a Mouth make for a very odd couple of warriors — but a very effective one as well, as they prove when the King in Black and his symbiotes invade Earth! Meanwhile, Conan makes a surprising discovery that may help him overcome another dark threat — the sorcerer Kulan Gath! But what part of the barbarian’s plan involves a heist of the Hellfire Club? Prepare for Conan and Deadpool to set sail…with the Marauders! Then, a riotous team-up between Conan and the Rhino goes wrong — when Spider-Man threatens to ruin their good time! The legendary barbarian continues his savage rampage across the Marvel Universe!

Conan robbing and then claiming possession of the Hellfire Club is pretty funny stuff. In fact, much of Conan’s trips through our times are amusing. We’re not talking Groo-level silliness, but it frequently makes me smile.

That’s what I’m going to miss. The outlandish premise and team-ups. That the book is largely self-contained and, while doling out lots of action, doesn’t take itself too seriously. I think the industry can use more titles like this.

For reasons unknown to me, this trade volume seems to be in short supply and expensive. I borrowed a copy I read via my local library system. It’s also available on Kindle. There may be some reasonably priced copies on the secondary market, but a cursory search didn’t turn up any. Good luck hunting one down. 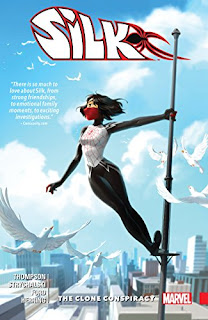 Sometimes I really enjoy Silk and sometimes I don’t. When Silk is doing down-to-earth adventuring and crime-fighting and living and working for a more benign than usual J. Jonah Jameson, I like her series. When it goes to alien dimensions and clones, I’m very much less enthusiastic.

For those of you who haven’t masted the variety of Spider-heroes in the Marvel Universe, Silk (Cindy Moon) is a young Korean-American woman who was bit by the same radioactive spider that bit our pal Peter Parker. She got somewhat different powers than Peter, had a bit of trouble controlling them, picked up a mentor who protected her from an enemy by putting into a bunker for several years. When she emerged, her family was missing, she had various adventures and ended up working for both S.H.I.E.L.D. and JJJ’s Fact Factory news site. She’s a likeable young hero.

Silk Vol. 3: The Clone Conspiracy [Marvel; $17.99] was published in 2017. Written by Robbie Thompson with art by Irene Strychalski and Tana Ford, this volume collects issues #14-19. Most of the stories involve clones of dead people and some awkward interactions between Cindy and her family. Her parents were in another dimension and her brother is recovering from health issues he acquired when he drank a form of the Green Goblin serum and joined a criminal gang.

Sigh. Clones and alien dimensions. I liked Thompson’s writing. I liked the art as well. But those killer tropes made reading this volume a chore. All the same, I’d be up for more Silk collections if Marvel publishes them.

That’s all for this time. I’ll be back soon with more news, views and reviews. Have a Happy New Year!