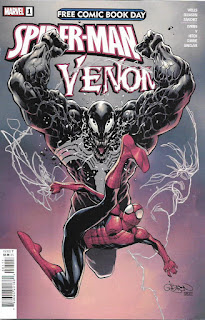 Welcome to the second part of my 2021's Free Comic Book Day reviews. My pals at Stormwatch Comics in West Berlin, New Jersey send me these FCBD comics so I can read and write about them in the bloggy thing. On three occasions, I’ve reached my goal of reading and writing about all the FCBD comics from a given year. The quest begins anew.

Free Comic Book Day 2021: Spider-Man/Venom #1 [Marvel] has a trio of excerpts from various titles. “Test-Drive” by Zeb Wells with art by Patrick Gleason is an eight-page segment of Ben Reilly (a Peter Parker clone last I recall) once again becoming Spider-Man with the intriguing twist of an organization backing him up. “Like Father, Like Son” by writers Ram V and Al Ewing with artists Bryan Hitch and Andrew Currie is an eight-page Venom segment that shows Eddie Brock and his son doing symbiote stuff. There’s also four pages of something teasing a new Kingpin storyline by Chip Zdarsky with art by Greg Smallwood and two pages of text that doesn’t really explain what all of the above mean.

QUALITY: Some nice writing and art, but none of the three excerpts pulled me into their respective stories.

ACCESSIBILITY: Virtually non-existent. I have no clue what’s gone before or even what’s happening in the excerpts. 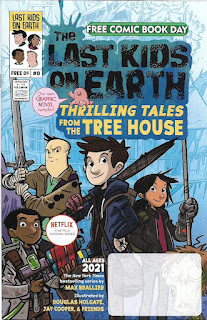 The Last Kids on Earth: Thrilling Tales from the Tree House is by New York Times bestselling author Max Brallier. It’s from Viking, an imprint from Penguin Random House. It features a 22-page story, which I assume is from an existing graphic novel. Art is credited to Douglas Wolgate, Lorena Alvarez Gomez, Xavier Bonet, Jay Cooper, Christopher Mitten and Anoosha Syed.

QUALITY: Serviceable. There are some funny moments in this tale and some gloriously wacky inventions. The storytelling was shaky, but we did get a fairly satisfying ending.

ACCESSIBILITY: What we didn’t get was a proper introduction to the world of The Last Kids on Earth. I have no idea how they ended up as the last kids on Earth, how they survive and what their world is like. I frequently felt lost while reading this story.

SALESMANSHIP: Excellent. Apparently, The Last Kids on Earth are a series of graphic novels and a Netflix original series. There are official toys and a video game. The issue also has three pages of ads for other books from the publisher. 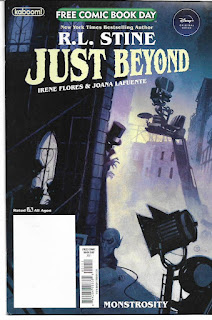 Just Beyond: Monstrosity [kaboom!] presents what I think might be the first issue of a comic book or the first chapter of a graphic novel. It’s written by New York Times bestselling author R.L. Stine with art by Irene Flores. Stine is best-known for his Goosebumps YA fiction, which my son Eddie devoured in elementary school. I will have more to say about that in a bit.

QUALITY: The 20-page story was excellent. Two brothers who are not on the same page have bought a long-closed studio known for making horror movies. The children of the optimistic brother are excited and maybe a little bit nervous. There’s a mysterious caretaker and lots of sinister suspense. I want to read more of this.

SALESMANSHIP: Almost as excellent. There are several pages of house ads for other books aimed at kids. However, there is no house ad directing the reader of this free comic to the rest of the story.

DIGRESSION: When he was just a tad, Eddie wrote a Goosebumps-like story in which his father (that would be me) turned into some kind of plant monster and had to be destroyed. The tale so terrified one of his classmates that the teacher asked me to talk to the girl and show her that I was not a plant monster and Eddie’s story was just a story. I was a proud parent that day. 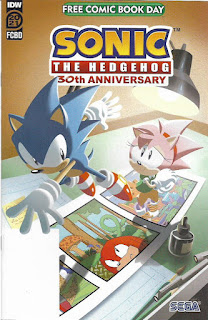 Sonic the Hedgehog 30th Anniversary [IDW] has two stories. “Amy’s New Hobby” is by Gale Galligan [story] and Thomas Rothlisberger [art]. The longer “Race to the Empire” is by David Mariotte [story] and various artists.

QUALITY: “Amy’s New Hobby” is a sweet little tale of a young girl whose secret hobby is creating comic book stories starring Sonic.I love the encouragement she gets from her family/friends and from Sonic himself. “Race to the Empire” is nothing more than flashbacks  from previous Sonic adventures. It’s not actually a story. It’s a summary and, as such, not very interesting to me.

ACCESSIBILITY: I was lost from the start. However, since Sonic is such a popular character, I suspect other readers already know who these characters are.

SALESMANSHIP: With several pages of ads for Sonic stuff, this FCBD comic gets full points here. 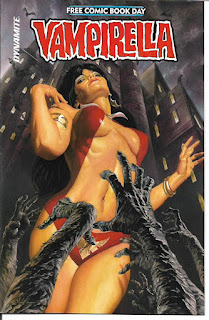 Vampirella Volume 5 #1 [Dynamite] has the 20-page opening chapter of “Seduction of the Innocent” by writer Christopher Priest and artist/colorist Ergun Gunduz with letterer Willie Schubert. Cover by Alex Ross. Edited by Matt Idelson.

QUALITY: Plane crash. Immortal but decomposing German bad guy. Our heroine on a psychiatrist’s couch. All sorts of supernatural evil lurking. Well-written. Beautifully drawn. I’m intrigued and will be reading the trade when it’s collected.

ACCESSIBILITY: Vampirella has been around for half a century and I have not stayed at all current with her adventures. While I haven’t a clue what she’s been up to in recent decades, I had no problem getting into this story.

SALESMANSHIP: Exceptional. Ten pages of ads for Vampirella books, posters and even a tarot deck.

That’s a wrap on this second installment of my Free Comic Book Day reviews. Look for part three soon.