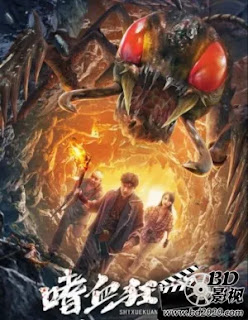 This is my round two with The Bloodthirsty Bees, a Chinese monster movie distributed by Youku and which I watched on YouTube a couple days ago. Writing about it is difficult because there’s nothing on the Internet Movie Database about the film. It had English-language sub-titles, but they were terse and not very helpful.

Youku is a video hosting service in Beijing, China. It distributes a wide range of mostly Chinese movies around the world. These would include comedies, romances, historical action films, fantasies and what you and I would recognize as monster movies not unlike which used to be a regular feature on the Syfy Channel.

The Bloodthirsty Bees made its YouTube debut on December 1. Youku has come to realize there is a decent English-speaking audience for such films and included English-language subtitles. As I said, they weren’t the best subtitles, but they did help me figure out a lot of what was going on in the movie. There will be...

Let’s start off with the best summary I can manage given the terse subtitles. A scientist has develop a way to breed bigger and better bees. Him being a benevolent man of science and all, I’m assuming he wants to feed the world.  But the bees turn out to be literal man-eaters, capable of stripping humans right down to the bones. They like their blood and beef.

The scientist’s boss is cool with the obvious military benefits of this development. Of course, they need to find a cure for the bee strings. Their soldiers will have the cure, but the enemy soldiers won’t. Does the Geneva Convention cover killer insects?

The secret laboratory is in a forest or jungle of some kind. After the bees escape, the scientist is hiding in the woods surrounding a small village. He doesn’t want his boss to get his notes and use them to weaponize the bees.

The hero of the story is a young man who becomes smitten with the scientist’s daughter. But there’s a riff between them because she is half-Japanese and the Japanese are definitely portrayed as very evil in this movie. It feels like the Chinese government may have had something to do with that propaganda, even only to the extent that the movie makers wanted to score brownie points.

The scientist’s daughter and his former student go looking for him with a few dozen soldiers and thugs. The daughter is a good person, the former student is a rotter. The villagers are good people who just want to live in peace, but they will fight to protect the ones they love.

The bees are two or three times the size of normal bees. Scary but mostly because of their numbers. For some unexplained reason, the queen bee is bigger than a large man and, unlike most queen bees, she doesn’t just stay at home and make baby bees.

The first fifteen minutes of the film are action-packed. The bees escape and kill some lab assistants before heading for the village. Many of the villagers are injured, but the body count appears to be low. But those who’ve been bitten by the bees come down with some sort of virus that is killing them. They then argue about getting vaccines for the virus and how that violates their freedoms. I’m just kidding. These are just simple villagers who know the value of medicine and science. They aren’t right-wing morons.

There’s a lot of filler between those opening minutes and the final battle between the bad guys and the villagers. We see the skeletons of some of the mercenaries and scientists, who must be more tasty than villagers.

We get the philosophical discussion of using the bees to produce food or using them for war. In that discussion, the people with the guns win and set out to find the queen bee’s nest. They need their special to make a cure, which they will test on the villagers and then kill them.

A familiar bit in these Chinese monster movies is for the bad guy to kill a couple of characters we don’t get to know well to force the lead good guys to do what the bad guy wants them to do. Which is find the nest for him.

The good guys escape. They find the nest. The bad guys track them to the nest. Fighting breaks out. An explosion takes out the queen bee and some of the bad guys. That surprised me. There was only one giant queen bee and there was still a lot of movie left.

However, more bad guys showed up to battle the villagers and grab the good scientist’s notes. Which include information on how these bees can be restored to normal. The villagers fight valiantly, but they don’t have guns or fancy swords.

The hero and the former student go at it a couple times. The former student tries to shoot the hero, but the scientist saves the hero by taking the bullet and dying. Slowly enough to solve the romantic problem by informing his daughter that she is really 100% Chinese. I admit the anti-Japanese propaganda was disturbing.

Though the queen bee is still dead, a horde of other killer bees descend on the village to dine out on the former student while the villagers make it to safety. It is now obvious disgusting villain meat tastes much better than decent villager meat. I’ll pass that cooking to Gordon Ramsey.

Using the scientist’s notes, the cure heals the villagers from the bee virus. The notes also reveal how to turn these man-eating bees back into friendly vegan bees. We learn this in a title card just before the credits roll.

I’m afraid The Bloodthirsty Bees represents around ninety minutes of my life I’ll never get back. I enjoy this type of a movie, but this one never clicked for me. The special effects were mediocre.  There were too many dull moments. I never felt I really got to know the characters. I can deal with bad special effects and bad pacing, but I need relatable human characters to make these movies work for me. I didn’t get them here.

I’ve got more news, views and reviews on tap as I work to get this blog back to the nigh-daily status it once had. Your comments are part of the process, so please let me know what you think of what I’m doing here.

Posted by Tony Isabella at 6:32 PM