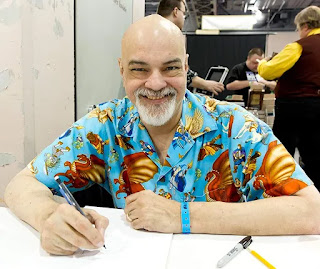 George Perez is the best of us.

When I say “us” in the above sentence, I am referring to all of the people who make up “comicdom.” The creators, the fans, the editors and publishers, retailers and their staffs, convention promoters, historians, filmmakers, performers and so on. Our little thing has certainly grown since Superman first leaped some tall building in pursuit of justice. It’s a big tent, but I don’t lightly single out my friend George as the best.

I spent a couple of days convincing myself that today’s opening was justified. That sentence came to me the moment I decided to write about George. I spent those couple of days trying to come up with another comics person who could hold that title and, though there were certainly some worthy candidates, it still came down to just George. The best of us.

George is beloved by his fans and loves them right back. He’s shown that over and over again. His love of comics shows in everything he has ever done, even his earliest works. He has always been the very model of a modern major creator: supremely talented, dependable and generous as all get out. He is a wonderful collaborator who earned the respect of everyone he’s teamed with. He’s contributed to many charities and gifted countless fans with terrific sketches. He’s freely given of his time and expertise to aspiring creators. Now, as he faces what none of us want to think about, the incredible regard with which his fans and fellow professionals hold him is becoming manifest.

I wish I could say I was a close friend of George’s. I didn’t do a lot of socializing within the industry when I lived and worked in New York City. I still don’t do a lot of that when I’m a guest at conventions. I’m kind of awkward and even shy when I’m not playing Tony Isabella.

I’m told George is a fine actor. I suppose I’m an actor as well, who benefited from watching my boss, friend and mentor Stan Lee in action. I play a confident and hopefully entertaining Tony Isabella at public events. It’s a sham, but I’m coming clean before anyone figures it out for themselves. I’m not faking my love for my fans and comics in general. It’s the presentation that calls upon whatever meager acting skills I have.

George is an aspirational role model. I wish I was more like him.  I’m not sure I have ever seen him without a warming smile on his handsome face. I’m more sure that I’ve never heard or read of him having an unkind word for anyone. That’s a bridge too far for me, but I admire George for it.

One of my claims to fame is that I was there at the start of this great man’s career, although the first time we worked together was a thankless nightmare of a job. For history’s sake...

As editor of Monsters Unleashed, I plotted a Gulliver Jones story to be drawn by Rich Buckler. The plot was not one of my best, but, knowing Rich liked to involve himself in the stories beyond drawing them, I figured he would help me make the story better. Instead, with a deadline looming, he turned the job over to this young man he’d been working with.

George was saddled with a flawed plot and a crazy deadline. He did make the deadline, but the job wasn’t going to be a showpiece for him. I asked Doug Moench to script the story because he could do it so much faster than I could have. Feeling the looming deadline and not having access to stronger inkers, I gave that assignment to Duffy Vohland, a swell guy but not the inker George needed at that stage in his career. I don’t think I’ve looked at the story since I did the proofreading on it prior to publication.

I have a vague memory of someone approaching me at a convention and asking what I thought of George’s work. Exhausted after what was a very long day, I probably mumbled something less than complimentary about the work. The unkind comment got back to George.

I have another vague memory of, a couple years later, George asking me about the comment and asking me why I kept giving him work. My response was a flip “Well, I could tell you weren’t always going to suck.” I have less faith in this memory. Maybe my mind was trying to convince me that I was less of a dick than I probably was.

But I did give George more work, assigning him to “The Sons of The Tiger” feature in The Deadly Hands of Kung Fu. The series was a hot mess. I plotted the first story George drew and hired Bill Mantlo to script it and then continue as the regular writer.

The rest is history. Bill and George did amazing things with this series. They created the White Tiger, who may have been the first Puerto Rican super-hero in comics.

I got to work with George one more time before I fled from New York to move back to Ohio. Not the best career move I could have made, but it may well have saved my life. 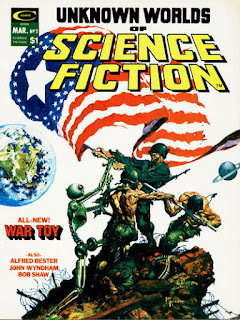 Roy Thomas had launched Unknown World of Science Fiction, a black-and-white magazine. He showed me a Michael Kaluta cover of a robot soldier and gave me the title - “War Toy” - and a line - “You don’t pin a medal on a tank!” I went to work.

Inspired by that cover, the line and my love of Robert Kanigher’s war stories over at DC Comics, I wrote my by-then-usual panel by panel, page by page plot. I didn’t not know Roy would give George that plot until I started getting the pencilled pages to script. I was blown away by those pages. I couldn’t script them fast enough. That’s how excited I was by what George had done. 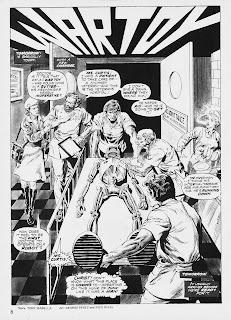 George made a robot created for war so damned human. The military might have programmed courage into FM-1, but George programmed in all the humanity and tragedy I could have hoped for. His artistic
storytelling was right on the money and, of all the stories I did for the black-and-white magazines, “War Toy” remains my favorite.

I have never had the opportunity to work with George again. I wish I had. I have followed his career along with his many fans and have been amazed at all he’s done. His work alone earns him the rank of “comics legend” and the manner in which he has lived his life makes him the best of us all.

I’ve seen George at a few conventions here and there. Talked to him a bit. Not the long conversations I would have enjoyed, but I am glad for them. I was and am in awe of him.

George Perez is the best of us. I wish I could be more like him. I hope to be more like him in the future. Even if it’s just a little. Because even a little more George Perez, reflected in his life and the lives of those he has touched, can only be good for comics and good for the world.

Posted by Tony Isabella at 2:14 PM