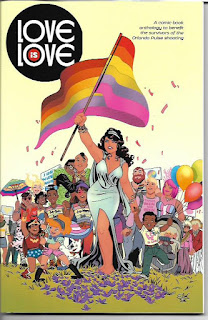 Love is Love [IDW; $9.99] is “a comic book anthology to benefit the survivors of the Orlando Pulse shooting.” It is beautiful and sad and anger-inducing and life-affirming and, in an industry known for its generosity, and its sometimes stumbling forward movement, it’s one of the most remarkable outpourings of support I've ever seen in my forty-four years in the industry. That it hit and remained at the top of The New York Times bestseller list and other such lists fills me with pride for the comics creators and publishers who came together to make this loving statement for a community so unfairly targeted by small minds and unconscionable violence.

My admiration and love for this anthology is getting in the way of this review. I think I can manage to stick to the facts for a few sentences, so here I go...

After hearing of the 49 lives lost in the shooting, Marc Andreyko was feeling gut-punched and helpless. He was not alone. He posted a comment on Facebook suggesting the comics community had to do something, anything, in the wake of such violence. This anthology nigh-spontaneously grew out of his post as dozens of other creators  came forward to offer their services...and a book like this became inevitable...and IDW got involved as publisher...and DC Comics and other publishers got involved...and here we are.

“Here” is an anthology that feels spontaneous but which must have taken incredible coordination on some many levels that the thought of so many hearts and minds and talents and business savvy united in common cause makes me dizzy and, as previously noted, so proud. From the gorgeous cover by Elsa Charretier with Jordie Bellarie to an introduction by Monster and Wonder Woman director Patty Jenkins, though 140-some pages of comics and other images to the afterword by Andreyko, this is a collection that speaks to the reader’s mind and heart and soul.

I’m stalling. In a book containing dozens of one and two-page contributions, it seems wrong to mention only a few. The one that brought tears to my eyes was writer James Robinson and artist Sagar Fornies' tale of a career Marine giving a wedding dinner toast to his son and his son’s new wife. I thought of a woman not unlike the heroine of this story, a woman who found happiness after a long struggle and who brought joy to the life of a good man and comfort to the lives of others. I’m getting sniffly and teary writing about the effect the sequence had on me. Comics that powerful do not cross my field of vision every day. Love is Love is filled with such moments.

You know, I’m going to leave it at just that one example of all the great writing and art in this anthology. There are appearances by DC Comics characters and other existing characters. There are expressions of  anger. There is fear. There are calls to action, even if the call is for something as simple and glorious as dancing. As I said earlier, In an industry known for its generosity, Love is Love is perhaps the most amazing outpouring of love and support and righteousness that I have ever experienced.

Love is Love has gone through at least three printings as I write these comments. When I checked its Amazon listing just now, it was “temporarily out of stock.” But copies will be available there and from other vendors. I hope it never goes out of print. Because we need to be reminded of both the tragedy and the love. Because this book needs to be in the hands of every comics reader, especially those whose hearts and minds have been closed by the bigotry of the right. Because it needs to be in every public and school library. Because, despite being suggested for mature readers, it is a book that needs to be read by young people at risk. To tell them that, even in times like this, they are not alone and that there are good and decent people who will be there for them and who will work to make things better for them.

In my mind, this started out as one of my usual review columns in which I would discuss several comics and related items. That plan got changed a few paragraphs back. For today, Love is Love is the only comic book I want to talk about.

Love is love. Never give up, never surrender. Always forward and, for life’s sake, keep on dancing. Not me, of course, because no one wants to see this old white guy dancing, but keep on dancing.

The bigots and the killers can and will be beaten. They will end up in the dustbin of history. Good people can and do come together to make this a better world. Because we are always, forever, stronger together.

Posted by Tony Isabella at 7:46 AM