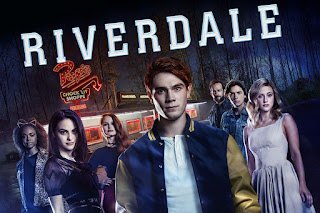 A few days ago, I posted this on my Facebook page:

Fifteen minutes of Riverdale was all I could stomach. I haven't yet decided if I'm going to try to watch the entire episode and write about it. I wasn't expecting much - the writer's seeming hatred of the Archie characters has been well established and it still baffles me that the company employs him in an executive position - but this was even worse than I imagined. Utter crap.

That began a very long thread with my friends going back and forth on the first episode’s merits or lack thereof. At one point, I was considering watching the entire episode before writing about this re-imagining of the Archie Comics signature series. To be honest, I decided against this. I have no reasonable expectation that I would like the remaining 45 minutes of the episode any more than I liked the first 15 minutes. Which doesn’t mean I don’t have anything to say about the show today.

First and foremost, I owe an apology to Roberto Aguirre-Sacasa, the chief creative officer of Archie Comics, the writer of this first episode and the show runner of the series. I don’t like this guy’s writing. I don’t like his versions of these classic characters. But I was out of line to suggest he hates them, even though I used the “seemingly” qualifier. He may love these characters, though he has, to me, an unfathomable way of showing it.

I’m not going to apologize for not liking the portion of the show I watched. Not every TV show or comic book is going to be to every viewer or reader’s liking. Despite some decent acting, my reaction to Riverdale was that it was, at very best, One Tree Hill Lite and that it did a considerable disservice to the Archie characters in the name of sordid shock value. I believe it’s fair conjecture to suggest that was the intent, given all the click-bait promotional articles teasing that sordid shock value.

“Utter crap” was an exaggeration. There were a few elements in the fifteen minutes that I thought were interesting. I’ll discuss the good and the bad in a bit.

Riverdale reminds me of my own home town of Medina. My town is way too white and way too knee-jerk “Christian” and way way too right-wing. But there are a lot of good souls in this city who have done their best to raise kids who are not bigots and racists, who don’t dismiss facts and science that challenges their partisan beliefs, who don’t approve of the manner in which Peepee Cheeto and his GOP thugs are perverting our democracy and our national acceptance of and generosity towards those who are not like us.

Traditionally, the Riverdale of the comic books has always been a safe place where the kids are basically good kids and the parents are loving and supportive of them. It took a long while before we saw non-white characters in the Archie comics and even longer to see even one gay character. But the Riverdale of the comic books remains a safe place for all its citizens. Call it a fantasy if you insist, but I think it a fantasy worth pursuing. I don’t see that Riverdale reflected in the TV show.

I am a believer in “core values” of comic-book characters. I don’t expect Agents of SHIELD or Arrow or The Flash or Gotham or Lucifer or Preacher or Supergirl or any of the many other comic-book shows I watch to be exactly like their comic-book counterparts. Comics, movies, TV...these are all different mediums. But, when I focus on the driving sensibility of these shows, I want to recognize those core values. I don’t see those in Riverdale and I don’t see them in Aguirre-Sacasa’s Afterlife with Archie, a comic-book series driven by shock value.

The episode opened with Cheryl and Jason Blossom going for a boat ride. Only Cheryl comes back alive. There’s a hint of an incestuous relationship between the twins. This appears to be a favorite theme of Aguirre-Sacasa because it’s also in Afterlife with Archie. The TV show doesn’t make it clear whether or not Cheryl murdered Jason, but that was shown in Afterlife. The TV show seems to be portraying Cheryl as evil incarnate, which is disappointing considering what a layered character she was in the non-Afterlife comics.

Archie is still that all-American good kid, at least that’s what my friends who like the show have tried to tell me. Of course, there is that whole business of sleeping with Ms. Grundy - albeit a hot teacher version of the character - which, even at the tender age of 15, the lad should know is a wrong thing to do.

You read that right. Grundy is a pedophile. The show clearly states  that Archie and Betty are sophomores. Which makes them 15 years old or so. Even if you want to say Archie got left back a year at some point and is 16 or older, that still makes Grundy a sex offender. And Archie still should have known he shouldn’t be having hot sex with her in the back of her car. Even if, as I’m told, the hot sex was not consummated.

Archie does have a nice conflict in that his father wants him to be part of his construction company and the teenager wants to pursue a career in music. Which brings us to the next thing that I hated about the portion of the show I watched.

Seeking advice, Archie goes to local high-school music super-stars Josie and the Pussycats. He wants them to look at the songs he has written. Josie and her band mates are the only black characters I saw in the opening minutes of the show and they are all arrogant, insulting mean girls. Really. Riverdale’s only black characters - that I saw - are horrible people.

In Afterlife with Archie, the only black characters that I recall are Chuck Clayton and his girlfriend Nancy. In that series, Chuck is figuratively emasculated by his girlfriend. Nancy is having an affair/romance/whatever behind Chuck’s back. With Ginger Lopez. On account of shock value rules. In the real Archie comic books, Chuck is one of my favorite characters. In Afterlife, he is reduced to a pathetic loser.

In Riverdale, Betty is still a really nice girl with a secret crush on Archie, with whom she has been friends all her life. Her mother is an angry perfectionist who demands the same from her daughter and has her on prescription meds.

Alice Cooper is, at best, an unpleasant character in this series. Apparently, something went on between Jason and her other daughter, and it must have gone badly since Mrs. Cooper openly expresses her wish that Jason is dead and not just missing. I’m told Jason’s body is found by the end of the episode.

Kevin Keller? That landmark character created by Dan Parent? That fine young man who was the first gay character in the Archie comic books and who defied all the usual flamboyant stereotypes? Not to fear. He’s so flaming in this TV series that he could be a member of the Fantastic Four.

There were two characters whose new circumstances were intriguing and who seemed to be pretty nice people. Veronica Lodge has moved to Riverdale with her now-divorced mother. Apparently, Hiram is in or heading to prison. All they have left is the one house that was in Hermione Lodge’s name. Smithers the always-faithful butler is on hand as well, but I’m not sure who’s covering his paycheck. Maybe he’s working for room and board.

I like Hermione because she’s willing to do whatever she has to do for her daughter, but doesn’t seem to be criminal like her former husband. She goes to old boyfriend Fred Andrews hoping to get a job as his accountant. Fred seems a little bitter about her going with the rich guy over him way back when, but his excuse for not hiring her is valid. What would his firm’s clients think of him hiring the ex-wife of the crooked Hiram Lodge?

I like Veronica because she carries herself with dignity despite her diminished circumstances. She quickly bonds with Betty, Archie and Kevin. She appreciates their friendship and returns it. Which is a ray of sunshine in this gloomy series.

Even while writing today’s bloggy thing, I was still considering watching the entire first episode of Riverdale. However, the more I wrote what I had seen, the more I realized I was already soured on the series. That said...

I watched fifteen minutes of the episode. Some of my friends said it got better. I would say maybe I’m right and maybe they’re right, but there might not be a right or wrong here. I didn’t like it and they did. You might like it or you may not. Reviews, even a partial review like this one, especially a partial review like this, aren’t  carved on stone tablets. It is a guide. It is an opinion. Only that and nothing more.

I’ll be back tomorrow with another installment of my “Rawhide Kid Wednesday” series. See you then.

Posted by Tony Isabella at 3:33 AM