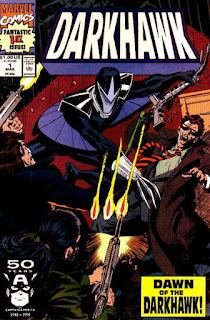 I’m working my way through Marvel Firsts: The 1990s Omnibus [$125] - all 1288 pages of it - a story at a time. I was not a big fan of Marvel during the 1990s, but I figured it was time to take another look at the characters and comics launched in what has been called “comics' most divisive decade.”

Last time out, I wrote in some detail about the ups and downs of my life in the 1990s. Detail which I won’t repeat today. I’ll give you a moment to quietly express your relief.

I read Darkhawk #1 [March 1991] when it came out. I read or skimmed some of the later issues. All I remember is that the back story of the title character got more and more convoluted as it went along. “Went along” translates to fifty monthly issues, which wasn’t a bad run back in the 1990s.

Darkhawk was created by then-editor-in-chief Tom DeFalco and artist Mike Manley. “Dawn of the Darkhawk” (24 pages) was written by Danny Fingeroth, drawn by Manley, colored by Joe Rosas and lettered by Joe Rosen. Howard Mackie was the editor.

This story starts with a symbolic splash page describing Darkhawk as “the greatest hero of the Nineties.” He’s not.

We get a full-page shot of the Hobgoblin in the usual over-the-top style of the decade - everyone wanted to draw like the guys over at Image - before learning the costumed villain is seeking some object of power. It’s not clear if the more human gangsters in the story are working for Hobgoblin or he’s working for them.

The gangsters question a homeless man named Saint Johnny at a soon-to-be-demolished amusement park. They hand the seeming alcoholic a wad of cash to help him recall where he might have seen the aforementioned object of power.

Another wad of cash is offered to District Attorney Grace Powell if she backs off prosecuting a gangster. This takes place in a hallway  of the New York County Courthouse. Not in a closed room. Not in a deserted parking deck. In a public hallway in the courthouse. This is where Darkhawk’s debut starting losing me.

Grace refuses the payoff. She goes home to her three kids: teenage Chris, younger brother and brainiac Jonathan and even younger bro Jason. Then husband Mike, who’s a police officer, also comes home. Points to Fingeroth for naming the characters clearly, something not always a given in the 1990s or since.

We learn Mike wanted to be a hero and is frustrated by how little he has been able to do to stop crime. The younger kids want to go to the amusement park before it’s torn down.

Mike has to pull an overtime shift and so does Grace. Chris has to babysit. He leaves to hang out with his friends and, with big bro gone, the Jonathan and Jason decide to go to the amusement park by themselves. Grace is pissed. Chris says he knows where they went. He’ll bring them back home.

At the park, Saint Johnny tells Chris the kids are at the funhouse. Chris finds the boys and all three of them see their dad getting a wad of cash from the criminals we saw earlier. A gangster insults Mike and a fight breaks out. Mike gets clubbed from behind and is about to be shot. That’s when Chris leaps into action.

In the melee, Chris and his brothers fall through the floor. The gangsters pursue them. Chris tells his siblings to hide while he distracts the bad guys.

COINCIDENCE ALERT. Chris stumbles across the object of power that the Hobgoblin was seeking. It’s an amulet and, when he grabs it, he turns into Darkhawk. This is where this story lost me completely.

Darkhawk fights back. One gangster dies. The new hero ties up the other two. He changes back to Chris. He confronts his dad. His dad ups and runs away. He retrieves his brothers.

Chris goes back to the amusement park to see if he can learn more about the amulet, but the place has already been demolished. Saint Johnny mumbles to him:

It’s not as cool as having a bat fly through your window, but it’s how Chris gets his name. Because he’s decided to use the amulet to be the hero his father never was.

The gangsters continue to threaten Grace and her kids. Meanwhile, Hobgoblin vows to get the object of power and kill anyone who gets in his way.

Wikipedia has the convoluted story of the rest of Darkhawk’s career and - warning - it will make your eyes glaze over.

None of the characters in “Dawn of the Darkhawk” ever became more than just characters in a story in this issue. Neither the writing nor the art rose above journeyman. I found it forgettable, but, as I’ve often said, my reviews are just reviews and not commandments carved in stone. I know from having had a table next to Fingeroth at a convention that there are readers who really love Darkhawk and his work on the series. I’m absolutely cool with that.

If you’ve been keeping score on this series of reviews, we are now at 3-3 with stories I liked tied with stories I didn’t like. I know I’ve neglected this series of columns and I know many of you really enjoy them. In this new year, I’ll do my best to bring them to you on a much more regular basis.