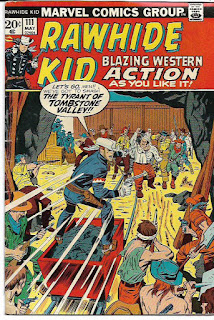 The Rawhide Kid is my favorite western comics character and one of my favorite comics characters period.  Something about the short of stature (but big on courage and fighting skills) Johnny Clay spoke to the short of stature (but big on comics-reading skills) teenage Tony Isabella.  After rereading the Kid’s earliest adventures when Marvel Comics reprinted them in a pair of Marvel Masterworks and an Essential Rawhide Kid volume, I wanted to reacquire every Rawhide Kid comic, reread them and write about them in this bloggy thing of mine. This is the 97th installment in that series.

The Rawhide Kid #111 [May 1973] features a reprint of the 18-page “The Tyrant of Tombstone Territory” from issue #41 [August 1964]. The Jack Kirby/Dick Ayers cover is also from that issue. The story was written by Stan Lee, penciled by Jack Keller and inked by Paul Reinman. My comments on this adventure were originally posted on October 24, 2012 and can be read here.

This reprint led to the only awkward moment I can remember having in my long friendship with Larry Lieber. The stories and art didn’t always come easy to Larry and, on rare occasion, he struggled and, when he did, a reprint would be scheduled.

George Roussos, my office mate and Larry’s inker, suggested I speak to Larry about my helping him out on the writing end. George knew how much I loved the character and Larry’s work. Larry was not at all pleased with the suggestion, even though it was made with the best of intentions. Larry let the matter drop and never spoke of it again. Though it had no lasting consequences - Larry and I worked on other things together - I always regretted causing him even this momentary discomfort.

The 18-page lead didn’t leave many editorial pages for the rest of the issue. There was no Marvel Bullpen Bulletins page, “Ridin’ the Trail with Rawhide” letters page, house ads or pin-ups. However, we did have room for a non-series reprint.

“The Promise” (4 pages) was by Stan Lee with Al Williamson on the pencils and Gray Morrow on the inks. It first appeared in Kid Colt Outlaw #60 [May 1956].

The story opens with Sheriff Jim Hawkes at the bedside of Corbett, who was the best friend of the lawman’s father. Corbett knows he’s not done the best job guiding his wild son Chance. He asks Jim to promise to take care of Chance.

Chance arrives in the room and, instead of grieving for his father, opines that he can whoop it up a lot more in town now that Hawkes will be taking care of him. The whooping commences and everyone in town wonders why the sheriff is looking the other way.

When Chance violates the sheriff’s law against wearing guns in the town, the sheriff confronts him. Chance is defiant and tells Hawkes he’ll have to shoot Chance’s guns off him. Which, after telling the young man to draw, is exactly what the sheriff does.

Sheriff Hawkes proceeds to knock Chance to the ground with a single punch and then throw him in a cell. Chance says Hawkes is breaking his promise. Hawkes disagrees:

I just realized I promised yore paw I’d take care of yuh! An’ that’s what I’m a-doin’! If I don’t stop yuh now, yuh’ll end up on the gallows!

The sheriff wraps it up in final panel:

This is yore chance...yuh can come out of that cell a decent hombre or an outlaw who I’ll hunt down like a dog! I’m givin’ yuh a chance to decide...the choice is up to you!

This is a simple story that gets to the point without dragging it out. Stan’s writing is crisp and concise. The Williamson/Morrow art is terrific, even with the lousy reproduction of Marvel’s reprints in the 1970s. I’d love to see the originals. 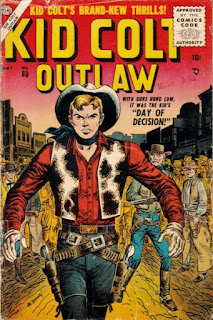 As I said above, this story originally appeared in Kid Colt Outlaw #60 [May 1956]. The powerful cover of that issue was drawn by the great Joe Maneely. But here’s a neat little oddity... 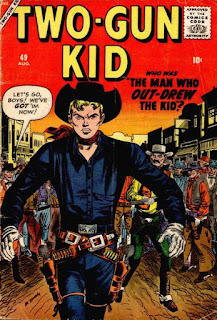 Three years later, the cover was reused for Two Gun Kid #49 [August 1959]. Kid Colt was retouched into the Two-Gun Kid. Some cover copy was added. Finally, Stan Goldberg, who’d colored the earlier cover, re-colored this one.

There are only four more new Rawhide Kid stories before the title goes all-reprint. Once we get through the new stories, “Rawhide Kid Wednesday” will continue right through the final issue. However, depending on how loquacious I get in discussing the covers, back-up stories and other editorial material, I expect to discuss anywhere from two to four issues in each installment.

Once I get to Rawhide Kid #151, I’ll be changing things up a bit. I’ll still be writing about westerns, many of them Marvel westerns, but I’ll have some surprises for you as well.