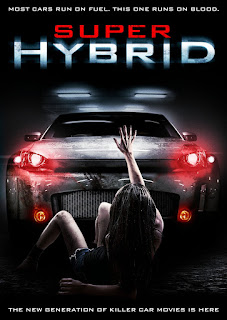 I have two very different films to tell you about today. From 2010, one advertised itself as the coming of “a new generation of killer car movies” and the other, from 1972, is said to have launched the “Kung fu” craze in the United States.

Super Hybrid (2010) is a pretty great thriller with a dull title. From the Internet Movie Database:

Late one night, a mysterious car is brought into the Chicago police impound garage after a deadly traffic accident. The on-call mechanics soon discover the car has a mind of its own. With hundreds of horsepower and two tons of reinforced steel at its command, it's a seemingly unstoppable killing machine capable of outrunning...and outwitting...humans.

The movie was directed by Eric Valette, whose resume consists of a couple movies, various episodes of overseas TV series and a bunch of shorts. Writer Neal Marshall Stevens, who sometimes writes under the name Benjamin Carr, has a lot of credits, including low-budget fun Zarkorr! The Invader (1996) and Kraa! The Sea Monster (1998).

The movie stars Oded Fehr from The Mummy, various other movies and TV series and a whole lot of voice acting for various super-heroes toons. He plays Ray, an unpleasant jerk who runs the Chicago police garage/impound lot.

Shannon Beckner plays mechanic Tilda, a veritable whiz with cars who carries baggage from tragedies in her past and has a deadbeat boyfriend. She butts heads with Ray frequently and has close ties to two of the other mechanics, one being the nephew she helped get a job at the garage.

Melanie Papalia plays secretary Maria with big hair, big attitude, fishnets and high heels. The actress has been in many movies and TV series and, though this role is a little over the top, she makes it fun. Like her, almost all of the characters in this movie are very likeable.

The movie opens with a black “fourth-generation Chevy Nova” turning into a flaming red Chevy Corvette Z06 and so luring two young men of bad character into trying to steal it. When they get into this car, the door handles and ignition and everything else disappears. Then it eats them. Burp!

Looking for its next meal, the shape-shifting killer car gets demolished when it’s stuck by a speeding car. It’s taken to the impound lot. It reforms and kills one of the mechanics.

The precise origin of the car is not given, but, after some of the cast gets a look at the octopus-like thing that is it’s true self, nephew Bobby [played by Ryan Kennedy] opines that it’s like a real-life species of octopus that disguises itself to lure prey to it. This creature disguises itself as cars so that it can search for prey instead of prey coming to it. It’s an outlandish theory, but it works for me.

The mechanics are trapped in the garage with the creature, mostly because former soldier Ray wants to hunt and capture it. He locks them into a garage and claims he lost the key. That he also had the emergency doors welded shut to prevent theft, well that’s just one more case of his extreme douche baggery.

"NO SIGNAL" NOTE: There’s no cell-phone reception in the garage and the only outside line gets destroyed.

The mechanics get picked off one by one. Most die heroically. The car-creature is damn smart. Ultimately, Ray and Tilda are the only ones left to fight the monster...and the climatic battle with the car is very good. So is the ending.

Ray opens the garage door. Once he gets out, he uses his phone to call a television station. Tilda walks out as well, but she turns to see several black Chevy Novas, all looking like they just came off an assembly line, drive out of the garage. The “super hybrid” was pregnant.

Tilda walks off in a daze, too spent to do anything except try to get as far away as possible. Ray looks up to find himself caught in the headlines of the baby killer cars.

I love Super Hybrid. It has terrific characters played by terrific actors. It has an interesting menace. It never drags and if often surprises. I would watch it again and I recommend it to you.

I also recommend Bill Dever’s B Movie Nation, an amazing blog that updates every day and which has introduced me to this and many other cool movies. Check it out. I think you’ll love it. 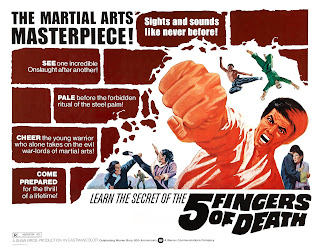 John David Warner reviewed the movie in The Deadly Hands of Kung Fu #1 [April 1974]. I never saw the movie when it was released, but, intrigued by my recent rereading of Warner’s review, I got a copy from my local library system and, just a few days ago, watched it for the first time. The Internet Movie Database synopsis is almost ridiculously short:

The movie was directed by Chang-hwa Jeong, who directed over fifty movies from 1953 to 1977. It was written by Yang Chiang, credited with 17 films over roughly the same period. All I know about either of them is that, via the IMDb, Jeong received the third Star Asia Lifetime Achievement Award when King Boxer was screened at the New York Asian Film Festival on Saturday, June 30, 2012.

Lo Lieh plays martial arts student Chao Chih-Hao. He seems to be a pretty good actor, but it’s difficult to be certain of any actors in this film, due to the primitive voice-dubbing. I’ll talk about some of the other actors in the spoilers zone.

The “battling martial arts schools” was a cliche in films like this and even in American movies like The Karate Kid. But there seems to be more to it here. It appears the dominant school rules the area. Its members bully civilians and take what they want, be that food or women.

Chin-Hao loves his elderly master’s daughter Sung Ying Ying [Wang Ping] and vice versa. His master sends him away to train at another school to better build Chin-Hao’s skill. On the trip to the school, he rescues a pretty singer [Wang Chin Feng] from an assault by the students of local martial arts tyrant Ming Dung-Shun [Tien Feng]. Forgive me if I misspell some of these names. The research sources I’m using aren’t consistent.

What follows is lots of action, lots of drama and even some doomed romance. Chin-Hao fails in his initiation test at the new school. He is relegated to menial tasks. However, this is a further test. Shen Chin-Pei [Fang Mian] is so pleased with Chin-Hao’s dedication and humility that he decides to teach him the secret of the dreaded “Iron Fist.” No relation to my old pal Danny Rand.

Ding-Shun keeps rolling out new killers to vex the good guys. The worst of the bunch are three Japanese thugs, but Ding-Shun’s son is no slouch in the monster department either. It is the son who will fight Chin-Hao in the tournament.

Han Lung [James Nam], one of Chin-Hao’s teachers, is jealous of the young man on two fronts. He resents Chin-Hao being their master’s chosen successor, and he’s in love with the singer, who is in love with Chin-Hao. He lures Chin-Hao into an ambush. Ding-Shun’s men beat the student and break his hands. He’s left alive because this would have been a short movie otherwise.

Things go badly for Han Lung. The singer still rebuffs him. When he goes to collect his reward from Ding-Shun, the tyrant’s son attacks him and plucks out his eyes. The blind traitor is thrown out into the street.

The disheartened Chin-Hao is found and nursed back to health by the singer. His master convinces him that he can overcome his injuries. Which he does. He leaves the singer to return to the school.

Meanwhile, Ding-Shun sends his son and assorted thugs to kill Chin-Hao’s old master. Because they are just bad people.

Ding-Shun’s Japanese hitman try to ambush Chin-Hao as he travels to the tournament but he is warned by a Ding-Shun flunky who has had his fill of that family. Chin-Hao defeats the two lesser Japanese  hitmen, killing them in the process. The flunky faces the worse of the trio to buy Chin-Hao time to get to the tournament. It doesn’t go well for the flunky.

The tournament. Chin-Hao arrives in the nick of time. Ying-Ying has come to cheer him on. The singer sees the obvious love between the two young people and leaves the tournament. Outside, she finds the blind Han Lung and opens her heart to him.

Chin-Hao beats Ding-Shun’s son and wins the tournament. Ding-Shun congratulates Shen Chin-Pei, then stabs him to death in the middle of the cheering crowd.

Back at his school, Ding-Shun prepares his men for the attack from Chin-Hao’s school that he knows is coming. Han Lung and the singer have gotten there first. They kill the lights and, in the darkness, Han Lung beats several henchman and plucks out the eyes of Ding-Shun’s son. He tricks Ding-Shun into killing his own son. However, when the lights go back on, Han Lung and the singer are killed by the enraged Ding-Shun.

Chin-Hao and his men arrive. Ding-Shun commits suicide rather than face the iron fist of the angry young man. It’s over...except for that remaining Japanese killer.

Short story. The Japanese killer attacks Chin-Hao in an alleyway. Summoning up the power of the iron fist, Chin-Hao sends the killer to meet the rest of his evil ilk in Hell. The conquering hero and his girl walk into the moonlight.

Despite the poor dubbing - it was a struggle to follow the dialogue at times - I enjoyed this movie. It did drag in places, but, when it did, we got action or a new villain. The main characters’ arcs were interesting and, tragic though some of those arcs turned out to be, the redemption scenes moved me. The performances of Lo Lieh, Wang Chin Feng and James Nam were excellent.

If I had seen this movie in 1972, I don’t think it would have made me a martial arts fanatic. Movies like Enter the Dragon and Black Belt Jones were more to my liking back then. That said, I’m glad I finally got to see this movie.

As I reread those back issues of The Deadly Hands of Kung Fu, I’ll be looking for reviews of other martial arts movies of that period that I might enjoy. If I can find them, I’ll watch them and review them in future bloggy things.