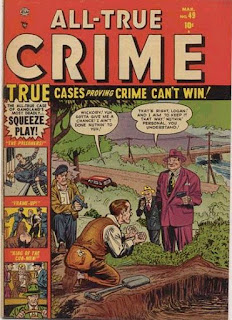 Today’s comic from the month of my birthday is All-True Crime #49
[Atlas; March, 1952].  Edited by Stan Lee, it’s one of four crime
comic books published by Atlas in December, 1951.  Two of the other
three also claim to feature “true” stories.  My gut tells me that
few if any of the stories were actually based on real criminals and
events and even those stretched the “truth” in a manner that would
do Reed Richards proud.

The cover is by Sol Brodsky, who could do anything related to comic
books or production and do it well.  He was one of my first bosses
at Marvel Comics in the early 1970s.

According to the Grand Comics Database, none of these stories has
been reprinted, though I’ve a vague memory of reading “King of the
Con Men” by Hank Chapman and Bernard Krigstein somewhere.  Artists
on the issue’s other three stories: Vernon Henkel, Jack Keller, and
Marion Sitton.

I’m getting a kick out of exploring the comics that hit the stands
in the month of my birth.  If you want a display of comics from the
month of your birthday, go to Mike’s Amazing World of Comics.

Matt Fraction’s Invincible Iron Man won the Eisner Award for best
new series and that’s a completely creditable victory.  I’m a hard
man to please and, even with my disbelief that Norman Osborn could
ever become the top cop of the United States, I thought issues #8-
24 of the series were sensational.  To jog your memory, those would
be the “Dark Reign” issues and the five-part “Stark Disassembled”
story arc.  There were issues within the run deserving of inclusion
in the disingenuously-titled Best American Comics series of annual
anthologies.  At the very least, the series should have been mentioned
in the listing of comics at the end of the anthology.

Fraction accomplished something I didn’t think possible in a Marvel
comic book.  He made me root for Tony Stark again.  I relished the
delicious irony of Osborn putting Stark in the same hunted outlaw
life into which Stark had previously placed Captain America and the
other heroes who opposed the Superhuman Registration Act.  And when
Stark was risking all and making an incredible sacrifice to protect
the world from Osborn getting Stark’s technology, I was surprised
to find I was thinking of Stark as a hero again.  Well done, sir.
Well done indeed.

Invincible Iron Man #8-24 also got me to thinking that this journey
of Tony Stark’s is something of a conservative fantasy.  Note that
I said “conservative” and not “right-wing.”  That’s because I’m not
sure there are any actual conservatives left in America, though I
also think, if there are, they are just too cowardly to oppose the
ridiculously villainous right as it exists in America today.  Newt
Gingrich as president is only infinitesimally more believable than
Norman Osborn as top cop.

I’ll elaborate.  Government is bad and Stark is a villain when he’s
a key government figure.  Government is still bad when Stark gets
fired and Osborn becomes a key government figure.  But Stark is a
free market super-hero of sorts when he transitions from being part
of the government to opposing it.  It’s possible I’m overthinking
this.  Still, it’s what I came away from the issues thinking and,
despite my liberal beliefs, the notion didn’t keep me from liking
these stories a whole bunch.

I’m still on track to get relatively current on Iron Man by the end
of the month, but decided to hold off reading Invincible Iron Man
and Iron Man 2.0 until I read a bunch of mini-series and one-shots.

The four-issue Iron Man: Legacy of Doom series by David Michelinie,
Bob Layton, and Ron Lim was good comics fun.  It’s an unlikely mix
of Iron Man, Doctor Doom, Mephisto, and a truly creepy otherworldly
creature, but it was entertaining.

The one-shot Iron Man: The End by Michelinie, Layton, and Bernard
Chang was an excellent sendoff to the character.  One of the best
Iron Man comics of the decade.

I didn’t care for the four-issue Iron Man Vs. Whiplash, but there
was something in it worthy of mentioning here.  The story is driven
by the destruction and slaughter of a Russian village.  One of the
final-issue reveals is that this was ordered by Vladimir Putin, the
prime minister of Russia, to wipe out the anti-Putin citizens who
lived there.  I was surprised to see a sitting political leader who
we are not at war with, not even cold war, characterized as a mass
murderer.

After I catch up on Iron Man, my next Marvel “target” will be the
Fantastic Four.  Can someone explain to me the difference between
the FF and Fantastic Four titles?

On Facebook, Bill Henley corrected me on the dynamic between the
Trigger Twins.  He wrote:

The premise of the Trigger Twins wasn't that they were equals.  It
was that Walt was a well-meaning klutz while Wayne was a crack shot
and skilled lawman. So guess which one got to be the official
sheriff? This mismatch was one of the few instances where the
fantasy-oriented DC Westerns resembled the real world.

Steven Rowe identified Owen Fitzgerald as the artist of that great
Bob Hope cover I ran this week.  He also says that many early Bob
Hope comics are in the public domain.

Sometime next week, I will be putting together a list of items for
sale.  This is the “online garage sale” I mentioned earlier in the
week.  Some items will be priced ridiculously low and some will be
priced somewhat less ridiculously low.

I’m not going to list the items in this blog because that would cut
into my time getting people pissed at me.  Like the anonymous fan
of Deathstroke who took offense to my characterizing fans of that
odious character as morons.  Of course, by implying I was somehow
suggesting all characters should be based on Bob Hope and Jerry
Lewis, the cowardly troll proved himself more than a typical moron.
He proved himself to be a monumental idiot.  Well done.

Anyway...my current plan is to e-mail this list to anyone who wants
it.  Send me your e-mail addresses at my own e-mail address as I’ll
make sure you get a copy of the list and the subsequent lists that
I hope to put together on a regular basis.