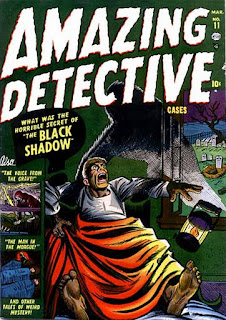 One issue earlier, Amazing Detective Cases had featured stories of
crime investigators.  With issue #11 [March, 1952], the anthology
title had a genre change operation and switched to horror stories.
It would run but three issues beyond this one.

The Grand Comics Database has tentatively identified Carl Burgos as
the cover artist.  There are five interior tales.  Most notable of
these is “The Weird Woman” with art by Joe Sinnott.  According to
comics collector John Kaminski, it’s the first Marvel/Atlas story,
chronologically, to feature mutants.  This one really needs to be
reprinted somewhere.

Near as I can tell, none of the other stories have been reprinted
either.  They are: “The Black Shadow” (drawn by Fred Kida); “Murder
in the Morgue” (tentatively identified by Atlas Tales as drawn by
George Klein); “A Voice from the Grave” (unknown artist); and “It’s
Time to Go, Higgins” (art by Bill Walton).  From the Timely-Atlas
discussion list, information on these stories was provided by Tom
Lammers and Ger Apeldoorn.

Amazing Detective Cases #11 hit the newsstands in December, 1951,
the month of my birth.  It was one of five Atlas horror titles that
month.  Atlas published just as many, if not more, crime, romance,
and war comics that month. 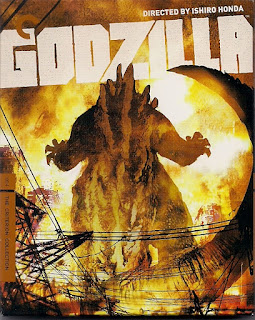 Laid low by illness, I spent most of last week reading comics and
books and watching movies and TV shows.  One of the highlights of
that downtime was Godzilla: The Criterion Collection [$39.95].  For
a presentation so important, I sprung for the Blu-ray version, now
selling for $27.99 at Amazon.

The cover of the Blu-ray version has a magnificient painting of the
Big G by Bill Sienkiewicz.  It is a wonderful iconic image, boldly
“shot” from behind, of Godzilla surrounded by the utter carnage of
its passing.  I gather some fans have complained because it is not
precisely the original Godzilla of 1954, but this painting speaks
to me.  I love it a lot.

I’ve seen both Gojira (Japanese) and Godzilla, King of the Monsters
(America) many times.  These are the best, cleanest versions ever.
I’ve written about these films many times in the past, so I’ll just
give you a few notes.

The Japanese version is superior.  It makes the historical and the
psychic link between the atomic bombing of Japan during World War
II and this new horror obvious without being too obvious.  It also
makes the love triangle between Emiko, Ogata, and Serizawa a vital
part of the story.  The film does drag in a couple places, but it
remains as powerful as ever.

I should never fail to mention that I get a kick out of the scene
where a feisty woman politician gets in the face of the officials
who want to keep the public unaware of the Godzilla threat.  She’s
got spunk...and I love that in a woman.

The American version is still great fun.  I loved it when I saw it
as a kid and love it today.  Raymond Burr is a commanding presence
and that’s despite how often I have to suppress giggles at how he
conducts his reporting-type business and how government doors fly
open for him.  If Newt Gingrich tried to make Burr’s “Steve Martin”
pay three grand to be on the plane, Burr’s stare would surely make
Gingrich wet himself.

I haven’t watched any of the Criterion special features, but I’ll
get to them eventually.  Right now, I’m blown away by their great
presentation of these classic films.

Via my area library system, I saw Tucker & Dale vs. Evil [Magnolia
Home Entertainment; $15.99] on DVD.  The 2011 film was recommended
by my pal Christopher Mills and it’s quirky humor appealed to me.
It’s sort of a hillbilly comedy of errors.

Tyler Labine (Dale) and Alan Tudyk (Tucker) have bought their dream
vacation home, a lakefront cabin in need of serious TLC.  On their
drive, they meet a group of mostly vacant college students.  When
Dale tries to talk to Allison (played by Katrina Bowden), the kids
are freaked out and think the worst of the two men.  Their unease
is heightened by Chad (Jesse Moss) telling them of serial murders
committed in these woods two decades earlier.

When Allison is injured and Dale rescues her, Chad and the rest of
the students believe their worst fears are true.  After that, it’s
just one unfortunate event after another.  The movie’s too much fun
to be a truly dark comedy, but it has its moments.  It’s an hour-
and-a-half well spent.  I recommend it.

Lots of comics and graphic novels have somehow eluded my attention
in the past decade, but when I hear about something I think I would
enjoy, I turn to my library system.  Which recently introduced me
to Jill Thompson’s Magic Trixie [HarperCollins; $8.99].  This 2008
graphic novel is aimed at young readers, but it will delight every
reader.

Trixie is a very young witch who longs to be taken seriously by her
family and school friends.  She’s also dealing with the arrival of
a baby sister, who Trixie sees as getting all the attention of her
parents and other family members.

Trixie’s friends are a pint-size “Who’s Who” of spookiness.  They
include a werewolf, mummy, Frankenstein-type monster, and a pair of
vampires.  Her schoolteacher is a ghost.  In 96 breezy pages, the
amazing Thompson brings them all to life while propelling the story
towards the most eventful of school activities, the dreaded “Show-
and-Tell.”  It’s a terrific book.

If you’re sending me a logo for consideration in our “Design a New
Tony Isabella Logo” contest, you must include your permission for
me to use that logo in this blog.  I am neither buying or seeking
any rights to your work beyond the right to include it in my blog
during this contest.  If I want to use your design beyond that, we
will negotiate an arrangement that works for both of us.

Logos aren’t your thing?  Fear not.  I have a second kooky contest
planned for March.

The arrival of a wee bit of paying work will dely the launch of my
“online garage sale” for a week or so.  If you’d like to be on the
mailing list for this sale, e-mail me your own e-mail address and
I’ll make sure you get all pertinent information.

I hope to have twice-monthly garage sales at my Medina home once I
can be reasonably assured of good weather.  That probably means May
or so, but I’m hoping for April.