IN THE MONTH OF MY BIRTH 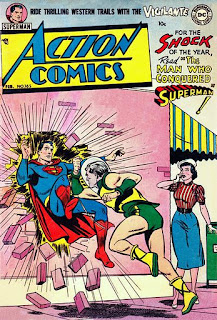 ﻿Mike’s Amazing World of Comics is one of the coolest comics sites
online and one of its coolest features is a search engine that lets
you see comic-book covers from any given month.  I recently checked
out the comics published in the month of my birth: December, 1951.
I could’ve gone with comics cover-dated the month of my birth, but
went this way instead.

The covers can be displayed in alphabetical order or by publication
date.  I went with the former.

After those simple steps, there were 153 comic-book covers shown.
From time to time, I’ll post one of the covers and share whatever
information I have on it.  I’m not sure if anyone other than myself
will be interested in this, but it is my name in the title of the
blog.  Yes, I’m pulling rank on you.

Action Comics #165 [cover-dated February, 1952] was a 44-page comic
with a cover price of ten cents.  Whitney Ellsworth is credited as
editor, but the Grand Comics Database lists Jack Schiff as managing
editor and Mort Weisinger and George Kashdan as story editors.  The
cover was drawn by Winslow Mortimer.

“The Man Who Conquered Superman” (12 pages) was by Bill Finger with
art by Wayne Boring (pencils) and Stan Kaye (inks).  Reprinted as
“The Alien Who Conquered Superman” in a 1962 annual, the man/alien
in the title is actually a robot built by Superman as part of some
plan to foil a criminal.  You wouldn’t think a guy like Supes would
need to go to so much trouble to accomplish that.

This is the only story from this issue that’s been reprinted and
the only one I’ve read.  The other stories feature Tommy Tomorrow,
Congo Bill, and the Vigilante.  In addition to the public service
message on the inside front cover - starring teen humor character
“Buzzy” - there are three pages of gag strips by the prolific Henry
Boltinoff.

The Tommy Tomorrow story is titled “The Bank of the Future” and I
find that an interesting title.  I bet if such a story were written
in today’s world of banking adventurism and chicanery it would be
very different from this story from sixty years ago.

While it would be a hoot to own these 153 comics from the month of
my birth, I can't imagine such a collecting goal would ever be within
my financial reach.  But it’s fun to look back through the ages at
them.  Well, for me, at least.

Iron Man is my Marvel reading project this month and I’m somewhere
in the middle of his time as director of S.H.I.E.L.D.  Among those
issues I read was the one-shot Iron Man/Captain America: Casualties
of War from February, 2007.  It was written by Christos Gage, one
of my current favorites.  Nicely done, sir.

A minor revelation has struck me as I’ve been reading Iron Man and
it’s that Tony Stark bears a great deal of responsibility for many
of the disasters that have befallen the Marvel Universe.  It could
and should just have easily been his actions, rather than those of
the New Warriors, that launched the odious Superhuman Registration
Act.  Stark’s political connections saved his metallic ass, but his
draconian administration of the Act led to civil rights abuses and
a series of equally disastrous events, not the least of which was
putting Norman Osborn in a position of great power.

The “Secret Invasion” doesn’t happen without the extreme hubris of
Stark and the other oh-so-superior members of “the Illuminati.”
Osborn’s “Dark Reign” is a direct result of Stark’s incompetence.
Asgard doesn’t fall without Osborn’s machinations.  “Fear Itself”
is at least partially driven by these and other situations in which
Stark played a heavy hand.  The shooting of Aunt May and the mystic
end of Peter Parker’s marriage are only minor casualties of Stark’s
bumbling and conceit.

If Marvel wants a big event that makes sense, it should be one in
which Stark has to pay the price for his arrogance in a major way.
He shouldn’t be wearing the Iron Man armor and he shouldn’t be in
charge of anything bigger than a garden club.  Though, even with a
garden club, he’d probably end up increasing the Plantman’s power
to world-threatening levels.

Stark must go.  Who’s with me?

Being a Cleveland sports fan is challenging.  Cleveland Cavaliers
fans seem to be enormously happy the basketball team is 6-7 at the
start of this shortened season.  Of course, the next 15 games will
be against some of the best teams in the league, so the Cavs might
plummet from the lofty heights of 6-7.

Then there’s the news that Cleveland Indians pitcher Fausto Carmona
has been arrested for allegedly using a false identity in his home
country of the Dominican Republic.  Seems his real name is Roberto
Hernandez Heredia and, at 31, he’s three years older than listed in
the team’s media guide.  Can’t wait to see how this nutty business
one plays out.