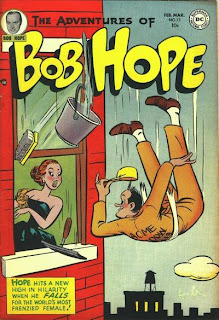 ﻿All I know about The Adventures of Bob Hope #13 is that it hit the
newsstands in the month of my birth (December 1951) and that it’s
dated February-March, 1952.  I know a bit more about the esteemed
Hope himself.

He was born in England, but spent a good chunk of his youth in my
birth town of Cleveland, Ohio.  He had an incredible career in show
business.  I probably couldn’t remember the names of all the Hope
movies I saw, but I do remember enjoying a lot of them on Cleveland
TV. He maintained a genuine fondness for Cleveland.  His service to
the USO impressed the heck out of me and that was far from his only
charitable activity.

Hope’s charity work is what has me thinking that money that could
be raised for good causes is being left on the table because DC has
apparently never explored reprinting any of their Bob Hope comics.
Or Jerry Lewis comics.  Or Ozzie and Harriet comics.  Or Pat Boone
comics.  Or...you get the idea.

DC published several celebrity comics and many of those celebrities
were involved in various charitable activities.  Reprinting these
comics to benefit causes the celebrities supported or, in the case
of those still with us, support today, strikes me as something DC
(and other publishers) can and should do.  It’s a matter of getting
in touch with the celebrities or their heirs and cutting the deal,
and it’s a way for DC and other publishers to give something back to
the national and international community.

These celebrity comics are highly collectible and that’s just among
comics collectors.  There are also many collectors of TV and movie
memorabilia that seek these issues.  I think there’s a market for
reprints of celebrity comics.  A large market.  Publishers should
go after that money and turn it to good use.

DC...the ball’s in your court.

The Shade #1-3 [DC; $2.99 each] kick off a 12-issue series which is
apparently already in danger of an early cancellation.  That would
be a shame.

One of the most intriguing characters in that series was the Shade.
Sometimes a hero, sometimes a villain, immortal, mysterious, and,
in the long run, more hero than villain.  So a Shade series strikes
me as welcome relief from all this “New 52" nonsense.  And it is,
despite a near-fatal flaw.

Robinson’s writing is first-rate, so much better than what we got
from him in the poisonous Justice League: Cry For Justice.  Cully
Hammer’s art is pretty good, too.  Not as refined as that which
graced the Starman series of the 1990s, but pretty good.

The basic plot is simple enough to allow Robinson and Hammer great
latitude in locales and supporting characters.  Someone mysterious
and powerful is trying to kill the Shade.  Basic, classic, fraught
with opportunities and possibilities.  I approve.

What I didn’t approve of is Robinson including a shlock character
whose fifteen minutes (panels) should have been up a decade or more
ago.  Deathstroke.  A stupid, vicious, juvenile character whose sad
appearance in this otherwise quality series is no more than crass
pandering to morons.

Oh, I’ll keep reading The Shade for as many issues as the DC powers
allow it to be published.  But, in the back of my mind, diminishing
my enjoyment, will be the worry that there’s more pandering waiting
for me when I turn the pages.

Each issue of Godzilla Legends [IDW; $3.99 per issue] spotlights an
ally or sparring partner of the Big G.  Two issues in, I’m finding
the series to be enjoyable.  Not breathtakingly brilliant, but fun
comic books nonetheless.

Anguirus was the star of the first issue in a story by Matt Frank
and Jeff Prezenkowski with art by Frank.  Appropriately titled “The
Underdog,” the issue plays up the creature’s tenacity as he takes
on the more powerful Destoroyah.  There’s a human element to this
battle as well which makes it more than monster versus monster and
gives us insight into Anguirus.

The second issue stars Rodan in a story by Jon Vankin with art by
Simon Gane.  Rodan is searching for its stolen egg as an obsessed
scientist schemes to keep it for his studies.  The scientist’s son
is involved in the tale as well, making for a second parent/child
story within the story.  I like the Anguirus issue better, but this
one was also very entertaining.

Titanosaurus is next.  I wonder if the series will run long enough
to get to Jet Jaguar.

A few personal notes to close out today’s bloggy thing:

Sainted Wife Barb, our kids Ed and Kelly, and even yours truly are
all doing well.  I’m still looking for assignments, but that’s just
part of being a freelancer.  So...we’re all good and no one should
take this next bit in any other way.

Because of situations I have alluded to in previous bloggy things,
situations I’m not at liberty to discuss, it has become necessary
for me to cancel all convention appearances through June.  I’ve had
to bow out of some existing charitable commitments as well and I’ll
also be declining all interview requests. I wish this weren’t the
case, but it’s unavoidable.

Neither my ongoing search for paying work nor these situations are
likely to be resolved soon.  I have to make adjustments to my life
to meet these challenges head on.

This bloggy thing will continue to appear on a daily basis with the
occasional day off.  I may have to monetize it and put up a “donate
through PayPal” link, but it will continue.  Writing this blog is
better, for me, at least, than any medication or therapy.

As soon as the weather permits, I will be holding one or two of my
legendary garage sales every month.  Keep watching this blog and my
Facebook page for announcements.

I’m trying to come up with a regular “online garage sale” as well.
More on that as I develop it.

That’s all for today, my bloggy readers.  Thanks for stopping by.
I’ll be back tomorrow with more stuff.