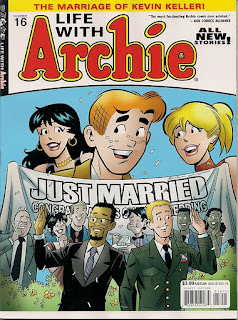 ﻿Life With Archie [$3.99] is a full-color comics magazine featuring
two alternate universe series, one in which Archie married Veronica
and another in which he married Betty.  Conceived by Michael Uslan
and written by Paul Kupperberg, it’s one of the best comics being
published today.  It’s a soap opera with a touch of science fiction
and, contrary to my usual habits, I read each new issue the day I
receive my subscription copy.

Issue #16 is a milestone issue in which Kevin Keller, who appears
in the “real” Archie comic books, marries the love of his life, Dr.
Clay Walker.  They met after Kevin was wounded in the Middle East
while rescuing one of the soldiers under his command and while he
was undergoing torturous rehabilitation.  They met again later and
discovered a mutual attraction that grew into love.  It’s not the
first same-sex marriage in comics, but it’s handled so positively
that it deserves all the praise I can muster.  That said...I have
three matters to raise which I hope are taken in the constructive
manner intended.

My friend Paul Kupperberg is doing the best writing of his career
on this title.  As I finish each issue, I’m eager to see what will
happen next.  But one element is somewhat lacking in these stories
and it’s an element that’s always been a key part of the foundation
of Archie and his universe.

Humor.  While the soap opera and mystery are driving these series,
there should be room for some laughs.  Humor is part of life, even
at the most trying of times and, knowing how well Kupperberg writes
comedy, I’d like to see life's humor reflected in Life With Archie.

Gay rights.  I love that Kevin’s family, friends, and, seemingly,
most of Riverdale believes in equal rights and follows through on
that belief.  But, given the more serious tone of Life With Archie
and the divisiveness of this issue - some Republican candidates have
made bigotry against gays part of their campaign strategy - I think
it’s unrealistic for there to be no evidence of the very real hate
that’s out there.

The wedding scene.  Kevin and Clay didn’t kiss.  Archie Comics are
already far ahead of mainstream comics publishers in including gay
characters in their stories.  However, since there’s no shortage of
lips-on-lips action in their boy-girl couples, the gay characters
need to be able to express their affection just as openly as those
other characters.

I am in awe of the courage shown by Archie Comics.  It’s not easy
for such an American institution to stand so forcefully against the
shrill voices of bigotry and hate.  But, and I say this with every
bit of conviction in my brain, heart, and soul, their young readers
are not those bigots and haters.  I know this from my own children
and their friends.  They accept and approve of the inevitable day
when gays enjoy the same rights as straights without consequence or
question.  The bigots and haters will be consigned to the dustbin
of history...which is where they belong.

Thanks for spending a part of your day with me. I'll be back
tomorrow with more stuff.