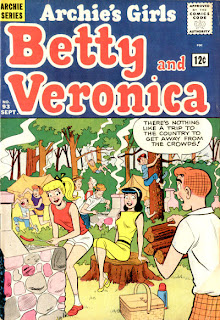 ﻿It was summer.  July 1963, to be specific.  The month I decided the
best job in the world would be to get paid for making comic books.
Fantastic Four Annual #1 was the catalyst and now we’re looking at
other issues from that month.

The cover of Archie's Girls Betty and Veronica #93 [September 1963]
was drawn by the great Bob White.  However, the inside B&V stories
were all penciled by Dan DeCarlo, inked by Rudy Lapick, and written
by Frank Doyle.  In addition to the stories, there was a one-page
Li’l Jinx strip written and drawn by Joe Edwards, a one-page Betty
and Veronica strip written by George Gladir with art by DeCarlo and
Lapick, and a one-page text piece on “Ann-Margret...Beautiful Teen
Bombshell.” Lots of material for only twelve cents.

The Grand Comics Database page for this issue includes synopsis of
the stories.  Here are the ones that stood out:

The girls go to a local island for the day to get some privacy, and
the boys follow them, only to discover that the island abounds in
rockslides and wild goats.

Betty makes the acquaintance of a handsome new boy. When she
refuses to introduce him to Veronica, Ronnie tries a series of
tricks, disguises and assumed identities to get close to him.

Li'l Jinx's daddy is concerned about her strange gyrations.

After a solid month of reading, I am more or less caught up on the
Avengers and X-Men titles...or at least those the friend who lends
me his comic books buys.  The reason I wanted to get current on all
those titles was so I could read and understand Avengers Vs. X-Men,
Marvel’s latest big event.

Some quick thoughts on the first four issues...

The conflict between the two teams works for me.  The Phoenix Force
is coming to Earth with Hope its likely host.  The Avengers think
this could mean destruction while the X-Men believe it could mean
a rebirth of the mutant species.

The execution of this event to date has left me not much liking the
leaders of the two teams.  Captain America has become an incestuous
clone of Nick Fury and the Tony Stark of Civil War.  He no longer
stands for the American dream or our better angels.  Instead, he’s
an overbearing government thug who acts as if all authority rests
with him.  In short, he’s no longer my Captain America.

Cyclops? He’s the new Magneto.  His actions reveal he has come to
consider mutants as separate from and superior to those mere human
beings with whom his kind much share the planet.  He’s been a party
to murder and ordered murder.  All the while overlooking that the
greatest wrong ever done to mutants was done by the Scarlet Witch,
herself a mutant.

Avengers Vs. X-Men has lots of pages of Avengers fighting X-Men in
the equivalent of a video game.  Indeed, though my friend decided
to pass on it, he tells me there is a companion title to the main
series - A Vs. X - which is nothing more than extended versions of
the battles from the main series.  Sheesh!

Where the series and its related spin-offs and titles shine for me
is when individual mutants have to chose a side.  Their decisions
don’t come easy and that makes for interesting moments.

I’ll be looking at some of those related spin-offs and titles soon.
For now, here’s my call...

Avengers Vs. X-Men isn’t either a solid creative success or a total
failure.  It’s about halfway between the two extremes.  I’m hoping
there is redemption for some of these heroes, human and mutant, who
have strayed from the path of the truly heroic.  I’ll choose hope
over misery every time.

Some quick and overdue notes on stories that appeared in issues of
Jughead’s Double Digest...

Jughead’s Double Digest #177 [March 2012] had an all-new, 22-page
story by the team of Tom DeFalco (writer), Ron Frenz (penciler) and
Al Milgrom (inker).  Reprints included many stories by some of my
favorite Jughead writers and artists: Craig Boldman, Frank Doyle,
George Gladir, Samm Schwartz and others.

Three Captain America titles, two of them ongoing, are on my desk
at the moment.  Captain America #1-5 featured yet another trip to
an alternate reality, which has become Marvel’s fall-back position
when its writers can’t come up with interesting stories that take
place in the “real” reality.  Issues #6-10 continued that story in
our reality as Jimmy Olsen, I mean, Cap underwent another strange
transformation, this time to a pre-super-soldier-serum version of
himself.  Issues #11-12 got a little more interesting with the new
Scourge killing villains in witness protection.  I bet that story
runs five issues as well.

Writer Ed Brubaker has done some wonderful work on Captain America,
but his decision to leave the title is probably a good one.  He’s
served his time with honor and, even in these stories, we still get
a glimpse of the honorable Steve Rogers, so unlike the one running
around most other Marvel titles.  Also worth noting/praising is the
high quality of the art in these dozen issues: Steve McNiven, Alan
Davis, Patch Zircher, all top talents.

Brubaker and co-writer Marc Andreyko also did fine work in Captain
America and Bucky #620-624, a storyline centered around World War
II missions.  That was followed by a four-issue story by Brubaker
and James Asmus involving some obscure continuity and a substitute
Cap from the 1940s.  Neither was the stuff of awards, but both were
entertaining and well-done.

The title changed to Captain America and Hawkeye with issue #629.
The new creative team is writer Cullen Bunn with artist Alessandro
Vitti.  It’s “nothing to see here” disappointing save for Captain
America turning into a dinosaur.  Or was that Jimmy Olsen?  Looking
back at some Cap stories of the past, I wonder if there’s a secret
comics brotherhood of silly transformations.

Later today, I’ll be posting a list of new items for sale from my
Vast Accumulation of Stuff.  These items will not be listed again.
Whatever doesn’t sell goes into my summer-long garage sale, which
will commence within a week or so.  Keep watching this blog and my
Facebook page for details.

Tomorrow, it’s another Rawhide Kid Wednesday as I look at the last
Jack Kirby issue of the title.  See you then.