YET ANOTHER BLACK LIGHTNING INTERVIEW 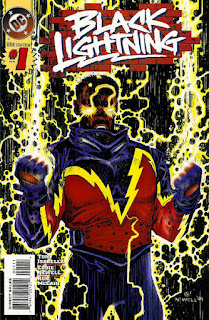 ﻿A while back, I asked my bloggy thing readers what they believed my
responsibilities were towards interview requests.  Many felt that
I should be grateful that people wanted to interview me, even when
they asked the same questions I have answered time and time again.
I don’t entirely agree with that position and I certainly believe
there are basic rules of courtesy interviewers should follow before
and after getting interviews.  We’ll discuss that a little further
after this interview, which was sent to the person requesting it on
May 11.  Rather than post the actual questions, which I don’t own,
I’m prefacing each answer with a subject line.

Entirely from me and my sense of fairness.  I had a lot of black
friends who read comic books and there weren’t a lot of black
heroes for them to enjoy.  I really liked the Black Panther and the
Falcon and Luke Cage, but I wanted to create a more relatable hero,
one who wasn’t an African king or an ex-con.

It was a process.  I tried to do something different when I had
Bill Foster take Hank Pym’s growth serum and become Black Goliath.
I wanted to call him Giant-Man.  But a scientist still wasn’t the
kind of person young readers would encounter in their own lives on
a regular basis.  When I started thinking about what kind of person
kids would encounter regularly and be very familiar with, “teacher”
seemed a natural choice.

After that, creating Jefferson Pierce was job one.  I wanted him to
be a fully-realized character, so I had to figure out most of his
background and why he could do the super-hero thing.  The notion of
returning to teach at his old high school was inspired by Welcome
Back Kotter, a TV show starring comedian Gabe Kaplin.

Why Black Lightning was part of the DC Universe

DC was planning to launch a book called Black Bomber, featuring a
white racist who turned into a black super-hero without either of
his identities being aware of the other.  It was easily one of the
most offensive concepts I’d ever seen...and DC had already bought
two really awful scripts for this character.  The company wanted me
to rewrite those scripts and then continue writing the series.  On
reading the scripts and seeing the basketball uniform costume which
had been designed for the Bomber, I declined.  Indeed, I begged DC
to write off those scripts and go with a new hero of my creation.

What convinced them was when I asked them if DC really wanted its
first headline black super-hero to be a white racist?  The company
gave me three weeks to come up with something better.  Which I did.
Without any input from DC.

What Black Lightning brought to DC

Diversity, reality, a street vibe, and, a more ground-level kind of
inspirational hero than DC had known.  DC was still real stuffy
when I came to work for them.  Their heroes weren’t connecting with
the younger readers of the 1970s in the way Marvel’s heroes were.
DC recruited me because they wanted some Marvel magic.  Always one
to go my own way, I tried to create a blend of both Marvel and DC’s
respective strengths.

The creation of Black Lightning

Jefferson Pierce was created first, then I needed a super-hero
persona for him.  Julius Schwartz had a Wonder Woman cover hanging
on his wall in which she was trying to lasso a black lightning bolt
while imploring Hera to help her “stop this black lightning before
it splits that building in two.”

The words “black lightning” sounded cool to me in the era when so
many movies included “black” in their titles, so I decided that’s
what I would name my creation.  The lightning motif was one of the
last pieces of the puzzle.

I never considered any other names for my character.

Jefferson Pierce is a reluctant hero.  He abhors violence, knows it
is necessary to fight the criminals who were plaguing his inner-
city neighborhood.  He holds himself to a very high moral code and
inspires others to do so as well.

When I wrote the second Black Lightning series, I decided he should
also be a religious man.  He was a “liberal Northern Baptist.”  He
was a man of faith without the bigotry that so often goes hand in
hand with so-called Christians.

Jeff Pierce is a man of faith.  He has faith in Jesus, in himself,
and in the potential of human beings.  He makes mistakes and they
weigh heavily on him, but he never stops trying to do what’s right
and never stops trying to improve the lives of those around him.
As a teacher and as a super-hero, he uses all his gifts in pursuit
of that.

My goals for Black Lightning

Black Lightning was supposed to be a partnership between me as his
creator and DC Comics as his publisher.  Unfortunately, DC has
never honored its agreements with me.  But my hope was that Black
Lightning would be the fourth iconic hero in DC’s “Big Four” along
with Superman, Batman and Wonder Woman.  I wanted to write novels
with the character and also a newspaper comic strip.  I wanted to
see a live-action Black Lightning TV series.  Because I thought and
still think he’s a great character who should be a major player in
the entertainment world.

I am the sole creator of Black Lightning.  Period.  That is the
actuality and that was the designation DC agreed to when we struck
our partnership deal.  If you’ll look at the first Black Lightning
series and the handful of stories that appeared in World’s Finest,
you’ll see I am the only credited creator.

Everything vital to Black Lightning was created before Trevor was
hired to draw the series.  I consider him the primary designer of
the first Black Lightning costume - which was replaced in my second
series - but he wasn’t the sole designer of that costume.  I had a
hand in the design as did Bob Rozakis and Joe Orlando.

While it has become commonplace to designate the first artist of a
character as co-creator, that wasn’t the case when I created Black
Lightning and it wasn’t what was in the agreement I struck with DC
Comics.  It was only when I inquired about buying out DC’s share of
my creator that DC retroactively and inappropriately decided Trevor
had been the character’s co-creator.  He wasn’t.

Trevor has developed into an insanely talented artist.  I love his
work.  But he had no effect on the creation or development of Black
Lightning.  Indeed, Eddy Newell, who drew my second series, had a
greater impact.  Eddy’s more realistic approach to Black Lightning
and his inner-city world inspired my scripts...and the costume in
that second series is nearly all Eddy.  The only things I gave him
there were the lightning eyes and a direction that the new costume
should looked like something Jeff Pierce put together on his own.
The Newell-designed costume is my favorite Black Lightning costume.

The interview request and questions were sent to me on May 3 sans
any prior “could you do this” notice as if it were expected of me
to answer questions for a DC-centered magazine.  The interviewer
needed my answers by May 17.

Initially, I wasn’t going to answer the questions at all.  But the
comments from my bloggy thing readers convinced me that I should.
So I did.

I sent the interviewer my responses on May 11, six full days before
my “deadline” of May 17.  I did include a copyright notice staking
my claim to my answers and giving him permission to use them.  But
I also included the instruction to him that my responses could not
be edited without my express permission.  I felt six days was more
than sufficient time to work out any problems he might have with my
responses.

Since May 3, I’ve received no e-mails from the interviewer.  Not
even a simple “thank you.”  That’s not the first time someone has
failed to perform that basic courtesy, but it’s still pretty rare.

This interviewer hasn’t ruined things for anyone else who wants to
interview me.  As always, my acceptance or refusal will depend on
my own schedule and the nature of the questions I’m asked.  When I
accept, I’ll answer the questions honestly...and I’ll also reserve
the right to re-purpose my answers as I choose.

Will the above interview ever appear in the magazine for which it
was conducted?  I don’t know.  But, given the discourtesy shown me,
I decided to run my answers in today’s bloggy thing.

There probably isn’t anything in my answers I haven’t said before.
Still, I hope you find those answers entertaining and informative.
I’d like to have something to show for my time.

I’m taking a day off for the Columbus wedding of my nephew Lou and
the most excellent Erica, but I will be back on Monday with more
stuff.