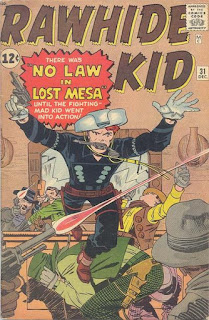 The Rawhide Kid #31 [December 1962] was Jack Kirby’s next-to-last
issue on the title and the last issue to feature three stories of
the title hero.  For the cover, Kirby did one of his finest action
shots of Rawhide, marred only by the gun floating in the air right
in front of the Kid’s mouth.  Talk about all-out action.

The Grand Comics Database tentatively credits Kirby as the inker of
this cover, but I’m not seeing it.  My guesses as to the identity
of the inker would be just that, but, if guess I must, I’d suggest
either Sol Brodsky or Paul Reinman.  But, as I said, those are no
more than guesses and artist identification isn’t my strong suit.

The GCD doesn’t list a credit for the writer of the cover copy, but
I don’t see how, logically, it could’ve been anyone other than Stan
Lee. “Fighting mad” strikes me as a description Stan used on quite
a few occasions.

All three of the Rawhide Kid stories are solid despite their short
lengths.  “Shoot-Out with Rock Rorick!” (7 pages) by Lee, Kirby,
and inker Dick Ayers leads off the issue. Rorick is a rancher who
has blocked the water to other ranchers to force them to sell their
land to him.  When Rorick’s thugs harass the ranchers in the local
saloon, Rawhide sends the bullies packing.  A highlight of the
fight is when one of the thugs exclaims in disbelief: “You can’t be
the Rawhide Kid! From what I heerd tell of ‘im, he must be most ten
feet tall and wide as a barn!”

The ranchers beseech the Kid to help them against Rorick, but he’s
busy enough just keeping one step ahead of the law.  But when his
path out of town takes him past the ranch of an elderly couple who
have been targeted by Rorick, Rawhide sees red.  He takes the fight
- and what a wild fight it is - to Rorick’s spread and takes down
the rancher and all his thugs.  He then forces Rorick to sell all
of his land to the Kid, who promptly restores it to its rightful
owners.  Rorick’s pleas to the townspeople fall on deaf ears.  The
story ends with Rawhide relaxing in the saloon.  Obviously, the Kid
can’t stay there for long, but he gets a momentary respite from the
life of a wanted man.

In “Trapped by Dead-Eye Dawson!” (6 pages), Rawhide is the prey of
Dawson, a special deputy described in the striking splash page - a
close-up of Dawson’s face with the Kid in his eyes - as a “man who
never stops, never gives up, until he has caught his prey.”  He’s
come to Rustler’s Gulch, Texas with his young son and his prey is
the Rawhide Kid.

Dawson is seven kinds of crafty and it looks bad for the Kid.  It
comes down to a stand-off between Dawson and the young outlaw
with the Kid having but one bullet left to his name.  When Dawson’s
son enters the field of battle, Rawhide seems to shoot him.  In reality,
he’s used his last bullet and his last chance to escape to kill a rattler
before said serpent could strike at the child.

Once again, Rawhide exercises his “mutant” ability to get a lawman
to quit rather than arrest the Kid.  I haven’t been keeping count,
but this is at least the third time this has happened at the end of
a story.  Maybe there should be an Old West version of the X-Men.

“Return of the Outlaw!” (5 pages) by Lee and artist Don Heck is the
issue’s non-series story.  After the death of their father, a pair
of brothers go their separate ways.  One becomes an outlaw and the
other a farmer.  It’s the second time for this basic concept which
was used earlier for the non-series story of The Rawhide Kid #19.

The farmer brother has a son who admires his outlaw uncle for his
fame, but when that brother rides up to the farm, the admiration is
short-lived.  Wounded, the outlaw falls from his horse as a posse
arrives to take him into custody.  But he wanted to come back and
tell his farmer brother one thing: “I - I told you I was takin’ the
easy way —- but —- I was wrong –- it was the hard way! You were the
smart one, Joe! You with the farm –- family –- you took the easy
way –- the right way –- not me –- I was a fool –- and now –- I’ll
pay for it –- for the rest of my life!”

There’s “No Law in Lost Mesa!” (5 pages), but the Kid doesn’t learn
that until he’s handed his guns over to a phony lawman.  Which is
the second time he’s fallen for that one.

Rawhide gets knocked about for several panels and then, guns or no
guns, he starts fighting back.  When he gets his guns back and with
the support townspeople finally tired of their town being a haven
for outlaws, the Kid civilizes the town right quick.  The grateful
townspeople would probably have been happy to see Rawhide stay on
with them, but he’ll be back on his lonely outlaw road by the next
issue.

I’ll discuss that next issue on the next Rawhide Kid Wednesday.  In
the meantime, I’ll be back tomorrow with another vintage comic-book
cover and more Free Comic Book Day reviews.