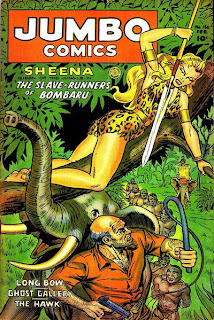 ﻿Published by Fiction House in my birth month of December 1951, here
is Jumbo Comics #156 [cover-dated February 1952]. Sheena, Queen of
the Jungle, has her big stabby spear on the cover and it looks like
she’s about to stabby a whip-wielding slaver.  If that’s not jumbo
fun, I don’t know what is.

The Grand Comics Database has not yet identified the cover artist
of this issue or any of the issue’s writers, but it does list the
various features and their artists.  “The Slave Runners of Bombaru”
(10 pages) is credited to Robert Webb.

Webb is also credited as the artist of the four-page Hawk story in
the issue.  Hawk is a continuation of the “Hawks of the Sea” series
credited by Will Eisner.

Other features included “Ghost Gallery” (6 pages) with art by the
legendary Jack Kamen and “Long Bow” (6 pages), the third Webb-drawn
story in the issue.  The former appears to be an anthology series
of spooky tales. The latter stars a Native American hero who also
headlined his own title for several issues.

Keep reading this bloggy things for more vintage comic-book covers
from the month of my birth.

World’s Most Dangerous Animals [Silver Dragon Books in conjunction
with Animal Planet] is something I would’ve loved as a kid and get
a kick out of today.  The grizzly bear and the saltwater croc are
the deadly critters featured in this giveaway.  Each entry starts
with a nice pin-up shot and some facts, then goes into an exciting
story of animal mayhem.  The two entries are well-written and well-
drawn.  I’d definitely recommend this title.

Not so the brief preview of Jurassic Strike Force 5 #1, which is as
poorly written and drawn as the full-size FCBD I reviewed a while
back.  It’s hard to believe it’s being published by the same outfit
that publishes World’s Most Dangerous Animals.

Oni Press’ Bad Medicine #1 Free Comic Book Day Edition was one of
the best of the giveaways.  It’s a scary contemporary sci-fi series
that lives in the general vicinity of The X-Files, but with a more
focused storyline.  It’s written by Nunzio DeFilippis and Christina
Weir with art by Christopher Mitten.  While it’s probably a series
best read several issues at a time, I thoroughly enjoyed this first
issue.  Backing up the cover feature is an all-new Wasteland story
by Antony Johnston and Christopher Mitten.  The back-up is readable
but not in the same league as Bad Medicine.

I can’t think of a comic book published by Bluewater Comics I have
enjoyed and the company’s Burt Ward Boy Wonder/Wrath of the Titans
flipbook didn’t change my low expectations.  Burt Ward involved in
animal rescue is cool and the notion of him having weird adventures
likewise, but the actual writing and art are pathetically terrible.
Following the Burt Ward material is an ad for a comic book called
The Secret Lives of Julie Newmar.  The woman on the rather boring
cover doesn’t even look like the actress.

The Wrath of the Titans side of the giveaway is less interesting.
The story is told in prose with illustrations - sometimes designed
to look like comic-book pages - on every other page.  Neither the
writing nor the art is any good.  I’d recommend giving both titles
a pass.  Which might be good advice to apply to Bluewater’s entire
line of comic books.

The Censored Howard Cruse seems to be a joint publication of Boom
and the Comic Book Legal Defense Fund.  While it makes its point by
showing how Cruse’s amazing stories would look/read if they had to
be censored, the stunt does a considerable disservice to the work.
Obviously, Cruse was okay with this, but, as a big fan of his work,
it annoyed the shit out of me.  If the word “shit” offends anyone,
they can take a magic marker to their computer screen.

Okay, yeah, I’m being kind of a dick here.  Sometimes the CBLDF, a
fine organization, strikes me as being a little too into itself and
a little too self-congratulatory.  I have issues.

Though this FCBD book isn’t the best showcase for Cruse’s upcoming
work from Boom! Town, let me recommend it to you.  Howard is one of
comicdom’s largely unsung geniuses.  He and his work are deserving
of a larger audience.

Marvel’s Free Comic Book Day 2012 (Avengers: Age of Ultron Point
One) #0.1 telegraphs its “mystery” villain in its title.  However,
what I found very cool about this Brian Michael Bendis/Bryan Hitch
story was the full-page last panel with Tony Stark discussing what
just happened.  Jaded as I am on Avengers/X-Men Marvel super-hero
comics at the moment, it makes me want to learn what happens next.
Excellent writing and art with an ending that wants me to read the
next issue.  I would rate this issue a very successful Free Comic
Book Day giveaway.  Nice job all around.

Bongo Comics/Spongebob Comics was another cool Free Comic Book Day
issue.  The Bongo side had a funny Simpsons story - “Tales from the
Springfield Bear Patrol” by Brian Houlihan with art by James Lloyd
and Andrew Pepoy and an amusing autobiographical story from Sergio
Aragones.  The Spongebob side had a fun story by Derek Drymon with
art by Gregg Schigiel and the great Ramona Fradon...and a page of
gags by James Kochalka.  I’m a regular Simpsons reader, but, though
I’ve never watched the Spongebob cartoon, I’m tempted to check out
his comic book.  Bongo scores with this giveaway.

After reading the Free Comic Book Day preview of Graphic Elvis from
Liquid Comics, I’m wishing I had the two hundred dollars to buy the
special limited collector’s edition it previews.  The concept: the
world’s greatest graphic novel creators celebrate the life of the
world’s greatest rockstar, teaming those great comics talents with
quotes by and about Elvis.  The giveaway features material by Stan
Lee, Steve Rude, Gilbert Hernandez and others.  It’s a cool concept
and the execution looks fantastic.  I don’t know how many comics
fans who scored this giveaway will be able to afford the book, but,
based on my own reaction, I think this FCBD preview will grab the
imagination of those who can afford it.

Some quick “me” updates...
Two thousand bucks, one new transmission and a set of brakes later,
our van is back in operating condition.  Now would be an absolutely
wonderful time for you to purchase items from my Vast Accumulation
of Stuff sales.  I posted previously-offered items here yesterday
and cut the prices on every item.  Later today, I’ll be posting a
few dozen new items for sale.  As always, your patronage is greatly
appreciated.

On Father’s Day, Sainted Wife Barb and Eddie made a great start in
the quest to get our garage cleaned out.  I should be able to work
on the garage sale set-up by early next week.

Although I won’t be able to start the official garage sales until
the first or second weekend in July, comics fans and retailers will
be able to make appointments to view and buy once I’ve completed my
initial set-up.  Check my Facebook page and this bloggy thing for
the announcement of when I’ll be open for business.  And, once I’m
open, I hope to restock on a nigh-daily basis.