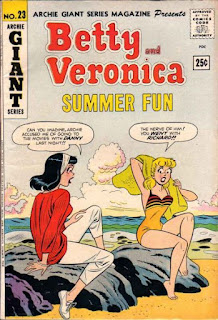 ﻿For those just joining us:

It was July 1963 when I realized people got paid for making comic
books and that I wanted that job.  This epiphany was triggered by
my buying and reading Fantastic Four Annual #1, the greatest comic
book of all time.  So, when I’m not starting these bloggy things of
mine with covers from my birth month of December 1951, I’m starting
them with covers from July 1963.

“Betty and Veronica Summer Fun” was featured in Archie Giant Series
Magazine #23 [September 1963].  The cover was penciled by the great
Dan DeCarlo and an as-yet-unidentified inker.

The 68-page issue had seven Betty and Veronica stories, a handful
of one-page gag strips (one with Li’l Jinx by Joe Edwards) and all
sorts of fillers: fashion, pin-ups, and profiles of actor/singer
Eddie Hodges and actress Tuesday Weld.  The stories were written by
either Frank Doyle or George Gladir and drawn by DeCarlo with inker
Rudy Lapick.

The Grand Comics Database has one-line synopsis of the seven Betty
and Veronica stories and, though I’ve never read these tales, some
of the synopsis alone have me intrigued and/or smiling:

Betty and Veronica must confront their fears when they're on an
island with a mysterious creature.

Betty is better than Veronica at every game except one.

Veronica hides from Archie so she won't commit the faux pas of
being early for a date.

Watch for more covers from the month of my awakening in this week’s
bloggy things.

I was so not the audience for Avengers: X-Sanction, the four-issue
limited series by Jeph Loeb and Ed McGuinness wherein a dying Cable
travels from a future to our time to destroy the Avengers he holds
responsible for “what happened to Hope.”  There isn’t much in that
sentence that I liked.

Loeb’s writing is hit and mostly miss for me.  I think that Cable’s
a stupid character. Future alternate worlds usually bore the crap
out of me.  I don’t dislike Hope per se, but these cling-ons to her
story have become incredibly tiresome.  Nothing worth reading here.

Riverdale Con 2012 is the setting for a Chuck and Nancy story in
B&V Friends Double Digest #224 [Archie; June 2012].  Written and
drawn by Dan Parent with inks by Rich Koslowski, the six-page tale
finds the duo going to the convention to promote cartoonist Chuck’s
newest creation, Danger Giraffe 3000.  Nancy is usually a bit more
supportive of her beau than she is in this story, though she does
come around when she realizes how much a little girl loves Danger
Giraffe.  Big no-no: Nancy leaves Chuck’s table unattended to grab
a romantic lunch with someone in a Danger Giraffe costume who she
thinks is her boyfriend.  Riverdale’s a pretty nice place and all,
but I bet it still has shoplifters.

As much as possible, I’m going to try to note Archie stories that
involve comic books or super-heroes.  Look for more of these notes
as I catch up on recent Archie comics and digests.

Spider-Man is spoofed on the cover of MAD #516 [August 2012] and is
just part of the super-hero silliness within.  While there isn’t a
parody of the upcoming movie inside the issue, there is “Spider-Man
Tweets While Watching the Avengers,” “What If Batman Were Jewish”
“MAD’s Less-Than-Amazing Outtakes from The Amazing Spider-Man” and,
“Super Powers You Didn’t Know the Avengers Have.”

Other features that tickled me included: “Least-Recommended Dating
Websites,” “A MAD Look at Hospitals” by Sergio Aragones, “Chilling
Thoughts 2012 Edition” by Desmond Devlin with art by Evan Dorkin,
and writer/artist Teresa Burns Parkhurst’s wonderfully topical and
biting “New Laws Under Consideration to Regulate Women’s Bodies.”
Even at $5.99 cheap, I’m enjoying MAD a lot these days.

Walt Disney's Mickey Mouse Vol. 1 "Race to Death Valley" by Floyd
Gottfredson [Fantagraphics; $29.99] collects some terrific Mickey
Mouse stories from Mickey’s early 1930s newspaper strip.  This is
one of my favorites versions of the immortal Mouse with comedy wed
to edge-of-your-seat adventure...and there’s just over two years of
the strip lovingly restored for modern readers.

In addition to the strip reprints, Fantagraphics packs this volume
with close to a hundred pages of informative articles and art from
the Disney archives.  Part of me would have preferred another year
of the strip.  Part of me is bowled over by the remarkable material
uncovered by editors David Gerstein and Gary Groth.  Every bit of
me recommends this book.  Check it out.

I’m not a fan of DC’s “New 52.”  While I’ve enjoyed some of those
titles, most of them have left me cold.  Even some titles I liked
after reading their first issues ended up disappointing me as they
continued.  Then there’s The Flash.

When I reviewed The Flash #1, I brushed it off with “nothing to see
here.”  Since then, I read issues #2-7 in one sitting and, just a
few days ago, read issues #8-9.  Darn if it isn’t one of those “New
52" rarities, a title that has gotten better with each succeeding
issue.  My kudos to artist/co-writer Francis Manapul and co-writer
Brian Buccellato.

In those two most recent issues, we’ve seen a super-powered, lost-
in-the-speed-force member of the Tuskegee Airmen, a most intriguing
take on the Flash’s relationship to the Speed Force, a new take on
Grodd and Gorilla City, a new, very true-to-life take on the Pied
Piper, an anti-super-hero movement that actually makes some sense
to me, and what appears to be a re-imagining of the Weather Wizard
as the head of a crime family...and those are only the new things
added to the title in those two issues.

I’m also loving the flow of Manapul’s visual storytelling and the
wonderfully weird things he’s doing with some of his sequences.  It
isn’t your typical comics storytelling or, in the case of too many
artists, an utter lack of storytelling.  It’s something different
that still works to move the story forward.  Though I almost never
say this about the current batch of artists, Manapul is someone I’d
love to work with.  I think his skills would challenge a writer and
challenges have always excited me.

The Flash is a contender for my favorite DC super-hero title.  I’m
looking forward to upcoming issues.

Later today, I’ll be posting a list of still-available sale items
from my Vast Accumulation of Stuff.  Then, on Tuesday, I’ll post a
list of new items for sale.  My bloggy thing readers came through
big for me last week and I’m hoping for even better results this
week.  I promise you that every purchase helps support me and the
family in the lavish style to which we have grown accustomed.  You
know, things like eating and having electricity.