ATTACK OF THE 100-PAGE BATMAN 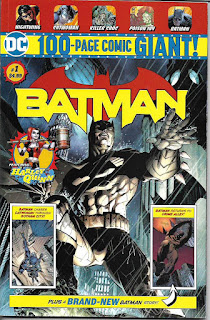 I am not immune to the sweet siren call of nostalgia. This despite my frequent admonishments to comics fans and professionals to move always forward and not become mired in the past.

The DC/Walmart 100-page giants have worked their nostalgic charms on me in two ways. When DC Comics started publishing its 100 Page Super Spectacular comics in the 1970s, I was crazy mad in love with them. I was ga-ga for the feel of those hefty comics in my hands. I was smitten by the incredible variety found in them. I bought all of them, regardless of their genre. I regret that I sold them when times got lean over the decades.

Dating back even further, I used to love going to the store to get the new comics. I went to my neighborhood drug stories on Tuesday and Thursday. Weather permitting, I made the long bike or bus ride across town to a little convenience store that got some of the new comics on the Saturday before the Tuesday and Thursday. New comic book day lost some of its charm when I bought and ran a comic-book store for over a decade and lost the rest when I figured out it was so much simpler to buy my new comics by mail. Still, even today, I rarely pass a comics store without at least going in to see if anything new leaps off the shelves at me.

I go to my local Medina Ohio Walmart at least once a week to see if its collectibles supplier has brought in new issues of the DC 100-Page Giants. They don’t seem to have a regular schedule, so I have had to accept that disappointments will be frequent. But, when they have new issues, I buy them.

At present, I have read the first three issues of Batman Giant and Justice League Giant [$4.99 each]. Sitting on my reading pile are Superman Giant #1-3 and Teen Titans Giant #1-3.

The Batman title is a fine comic book, one I enjoy even though I’m not thrilled with Batman these days. The first two issues had new stories by Jimmy Palmiotti (writer), Patch Zircher (artist) and John Kalisz (colorist). The first did a good job of familiarizing readers with basic Batman information. The second wrapped up this story in satisfactory manner with a surprise twist that I hope is in the regular Batman continuity as well.

Bruce Wayne rebuilds the Monarch Theater where he saw a movie with his parents just before they were murdered. It seems to be an old-fashioned glitzy theater showing vintage films. Because, as Wayne has come to realize, if one doesn’t celebrate good memories, then all a person has are the dark ones. That’s way more sane than the usual for Batman.

Zircher is an amazing artist. Solid storytelling. Dramatic poses. Humanity and mood. The man has it all.

Backing up the new stories are reprints of the first Batman/Hush story arc by Jeph Loeb, Jim Lee and Scott Williams; the beginning of the Nightwing series by Kyle Higgins, Eddy Barrows and JP Mayer; and the start of the darkly hilarious Harley Quinn title by Amanda Conner, Jimmy Palmiotti and Chad Hardin. Yes, Hush would eventually become overused and tiresome as is the way of too many villains in today’s comics world and the Harley Quinn title would give birth to too many spin-offs that diminished the charm of the original title, but these early issues were very entertaining.

Batman Giant #3 has a new Batman story by Brian Michael Bendis and artist Nick Derington. It’s the first chapter of what seems to be an extended serial with some nice hooks, references and suspense. It wasn’t ground-shattering, but it was a solid tale that makes me eager to see what comes next. 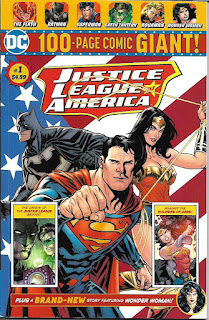 Wonder Woman is the lead feature in Justice League Giant, which makes me wish there was a Wonder Woman Giant as well. I could see a new story followed by classic reprints from her earlier decades of adventures. But I digress.

Tim Seeley is the writer of the Wonder Woman stories in issues #1 and #2. The first, drawn by Rick Leonardi, is a terrific tale that covers some of Diana’s history while delivering battlefield action and a hopeful ending. The hopeful ending was key for me because I like Wonder Woman best when she is an agent of hope instead of war. The latter has never looked good on her.

Issue #2's story is drawn by Felipe Watanabe and Jonas Trinidade. It’s mythology-based with Wonder Woman and Steve Trevor contending with Echidna, the legendary mother of monsters. It’s a solid story with another satisfying ending.

Issue #3's new story is my favorite to date. Written by Connor and Palmiotti with art by Hardin, it pits the Amazon Princess against a raging forest fire. A subplot with Steve is sort of shoe-horned  into the story and leads into next issue’s adventure.

The reprints all come from the early days of the New 52. As much as I love Geoff Johns’ writing and Jim Lee’s art, their reintroduction of the Justice League always struck me as unfortunately clumsy. I liked the story okay, but it wasn’t exceptional.

The Flash stories by Francis Manapul and Brian Buccellato are more solid. Manapul’s layouts are wild, but, even though I prefer more straightforward storytelling, they work for me here.

The Aquaman stories by Geoff Johns with penciller Ivan Reis are the best of the reprints. From the first Aquaman scenes, Johns brought home how cool and interesting the Sea King is. The menaces are real creepy. The townspeople are authentic and interesting. When I look at how excited comics fans and non-comics readers are getting about the forthcoming Aquaman movie, I think an Aquaman Giant might be another good addition to the DC/Walmart line.

Sidebar. I feel even stronger about a Black Lightning Giant. With new stories by me, DC’s best Black Lightning writer, and reprints from each of the three times I’ve written him. Does anyone know any powerful executives at Walmart?

While I might have been drawn to these DC/Walmart giants because of nostalgia, I also believe they make perfect sense from a business standpoint. We have all these DC super-hero fans who don’t go to comics shops and who don’t buy comic books and who only know these characters from the movies and TV. However, many of them do shop at Walmart. If the comics industry is to thrive, we need to reach the  fans who aren’t buying our comics. Yet.

Posted by Tony Isabella at 6:29 PM