ICEMAN AND THE CHAMPIONS 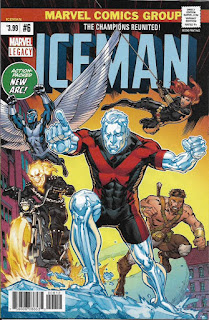 Iceman #6 [January 2018] was one of the comic books donated to the Flaming River Con - the Midwest's first LGBTQ comics convention - by Carol and John's Comic Shop. It's a variant cover by Michael Ryan and Nolan Woodard, based on the original cover to Champions #1 (1975) by Gil Kane and Dan Adkins. As most of you know, I was the originator of that original Champions series.

Sina Grace's story has the original members of the Champions coming together to honor the Black Widow, who was, apparently, dead at the time of this issue. I hope she's gotten better since because I love the character. It's a well-written tale with good art by Robert Gill.

Here's my only problem:

What the heck was Bobby Drake thinking when he dressed for this cover?

He's the Iceman. He doesn't need a costume like this, especially one that could conceivably limit the use of his powers. All he needs - in the interest of propriety - is some indication that he's wearing trunks underneath the ice. Even that might not be necessary as we all know what cold does to a man's private parts.

I'll be back soon with more stuff.

Posted by Tony Isabella at 4:24 PM