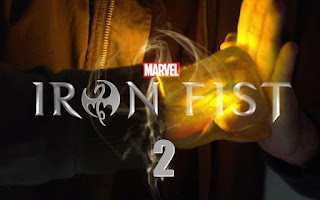 Black Lightning Season Two is masterfully exciting, but I’m having serious doubts about some other super-hero shows. Maybe those hours can be put to better use.

So far, the high points of this second season have been the guest appearances of Simone Messick (Misty Knight), Christine Toy Johnson (Mrs. Sherry Yang) and Tom Pelphrey (the struggling-to-be-a-better-man Ward Meachum). Messick is one of the very best actors in any of the Marvel series; I like her portrayal of Misty better than any of the comic-book versions, including mine.

That Johnson is such a commanding presence caught me by surprise. In my mind’s eye, I envision her being a regular on a Daughters of the Dragon series starring Messick and Henwick. Which I think Chris Claremont should write with an occasional script by me.

Pelphrey’s performances aren’t pitch perfect, but Ward’s journey is the most compelling aspect of the second season. He’s trying hard, but he’s really bad at it. I’m really rooting for him to succeed in his journey.

Arrow has a really dumb set-up. Even allowing for the pettiness of our current government, why would you lock up an asset like Oliver Queen when you could use him for Suicide Squad-type missions? With him in prison, the supporting characters are spinning all over the map and much less interesting for it.

The first new Arrow script was transparently manipulative. Worst of all, the show is still foisting the ridiculous acting "stylings" of  Kirk Acevedo on us. Put this actor out of his misery by killing his character so hard he can’t even return for flashback sequences.

Supergirl has the wondrous Melissa Benoist going for it, but she’s not getting the backup she needs. J'onn J'onzz is awkward as the new preacher to aliens. Brainiac 5 is no Winn. The James/Lena love match makes my teeth hurt. I’m not sure how many weeks I can take of Alex Danvers’ bad hair day.

What I do like is the public revelation that the U.S. President is an alien. No, not Donald Trump, though they would explain so much. I’m talking about Lynda Carter’s Olivia Marsdin. It’s bothered me that Supergirl and J’onn and others were aware of this deception, which is as unconstitutional as I can imagine. But, since I love Carter so much in the role, here’s a simple solution to part of this crisis:

Marsdin was actually born in the United States. Her parents came to Earth decades ago. Olivia is a citizen and thus eligible to become President. I mean, her deception is still a political shitshow and she should probably resign her office, but, at least, she wouldn’t end up in a cell block with Supergirl, J’onn, etc.

I’m excited by the casting of Nicole Maines as Nia Nal. I’m a bit disappointed by the meekness of her character in the first episode. Of course, given that one of my dearest friends is transgender and she’s anything but meek, I may be projecting here.

The Flash? Time travel and another speedster. Yawn. How about the show has Caitlin change her name to “Sue”, marry Ralph Dibney and the show becomes The Famous Elongated Man. That would be must-see-TV for me.

At this time, I have no conventions scheduled for either December or January. It’ll take a pretty good invitation for me to hit the road in either of those months.

I have already accepted invitations to several conventions in 2019. I’ll doubtless accept more. But, whenever possible, I’ll be spacing those out so I’m not doing back-to-back conventions. Here’s the 2019 schedule so far:

Comic-Con International is too expensive for me to justify unless someone (Black Lightning, DC Comics, Marvel Comics, the convention itself) is bringing me in. But Saintly Wife Barb insists I attend next year because, like me, she is tired of Black Lightning stuff going on without the creator of Black Lightning in attendance. So I’m making the trip as cheaply as I can manage.

As for additional conventions, with one or two exceptions, I can’t see myself doing events that do not cover my hotel/travel expenses, pay me an appearance fee and treat me respect. I love conventions, but they take a lot out of me. I need to get paid. While I am not an inexpensive guest, I am a terrific guest. I can do two panels a day for you and take part in pre-event publicity.

With exactly two excepted conventions, I do charge for my signature at these events. However, I’ll sign one free book for any fan who doesn’t piss me off; leave your “MAGA” hat at home and don’t harass friends of mine. I’ll also sign any Isabella item that you buy from  me for free. Before each convention, as I write about them in the bloggy thing prior to the con, you’ll find my signature policy and prices. I’ll also have signage about this at my table.

If you want me as a guest at your event, you must e-mail me. I will then send you my appearance requirements. If you can’t meet those requirements, I won’t hold it against you. Having worked with Roger Price on countless Mid-Ohio-Con events, I know how difficult it can be juggling convention budgets. I get it.

Are you writing another Black Lightning series?

Are you writing anything else for DC or Marvel?

I have pitched DC Comics on an ongoing Black Lightning series. The company has not responded to those pitches. I fear that, in their infinite lack of wisdom, they would rather reduce their most iconic black super-hero to just another Batman sidekick. You already know how insulting I find that.

I’ve pitched both DC and Marvel on non-Black Lightning projects in recent months. I’m waiting to hear on those before I send any more pitches to them.

Not expecting to hear from either of the Big Two soon - though I’d love to be wrong about that - I’m working on other stuff. My plan is to finish writing both Black Lightning and My Road to Diversity and the second volume of July 1963: A Pivotal Month in the Comic-Book Life of Tony Isabella before the end of the year. These books are the main reason I want to stay home in December.

I’m also working on several other projects. I am creating a brand-new super-hero universe and want to write the first issues of the first three titles in it. I am developing a new comics weekly for younger readers, sort of an American version of The Beano. I’m also working on the treatment and screenplay for a horror movie that, if my associate secures the necessary funding, would be filmed right here in Cleveland, Ohio. In my spare time - LOL - I’m developing an online show about comic books and other items of interest to Tony Isabella, the man with a face for radio.

As with conventions, if you’re an editor or a publisher who wants to work with me, your incredible taste in talent can be advanced by e-mailing me. Except when I’m out of town at conventions, I do my best to answer all such e-mails within a day or two.

Posted by Tony Isabella at 3:40 PM