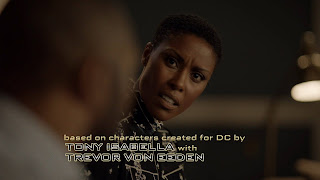 “Black Lightning Beat” is the ongoing blog-within-the-bloggy where I discuss all things Black Lightning. There’s a lot going on with my creation and yours truly, but today I want to concentrate on the Black Lightning Season Two premiere: “The Book of Consequences: Chapter One: The Rise of the Green Light Babies.”

All season long, I plan to kind of sort of live blog each episode of Black Lightning. I watch the episodes with my family on Tuesday night. Then, after having enjoyed said episodes, I’ll watch them a second time and take notes. Those notes are what you’ll be reading in these TV series-centric installments of the bloggy. I warn you in advance that this will be a long piece.

My first impression of the premiere was one of my “Things That Make Me Happy” posts:

Black Lightning Season Two kicked off with an amazing script with a key moment in nearly every scene. Salim Akil deserves an Emmy nod for writing this one.

I loved the episode so much that I asked my friend Salim for a copy of his script. I want to study it while I prepare to write my first ever screenplay. No, it’s not for Black Lightning. I have to learn this craft before I pitch for my favorite TV series. My script is for a horror movie that, assuming we get the funding we need, will be shot in Cleveland. More on that in the future.

I’ve always considered myself the sole creator of Black Lightning. Everything important about the character and concept was created by me and only me before I pitched the series to DC Comics. Indeed, I was recognized in the comic-book credits as the sole creator up to the moment I inquired about buying out DC’s share of my creation. Though I wrote the current official credit line to recognize Trevor von Eeden as the original artist of the series and main (of five poeple) designer of the original costume, I do not and have never thought of him as a co-creator of the character.

In the credits of the TV series, Salim Akil receives a “developed by” credit. I honestly think that does an injustice to my friend. As far as I’m concerned, he’s the creator of the Black Lightning TV series. Comic books and TV series are very different things, even when they start from the same core values. Salim took my creation and, working with talented writers, cast members and crew, made it something as original unto itself as Jefferson Pierce was when I created him in 1976. My respect for him and everyone working on the series knows no bounds. Every episode is like a special Christmas gift to me.

On to “The Rise of the Green Light Babies”...

A great deal of what we call in the business “heavy shit” went down in the first season finale. As the overall title of the first arc of the new season makes clear, there are consequences arising out of those events.

When the chapter title appeared on the screen with those glorious graphics, both my son Ed and I went “Whoa!” I can’t recall the last time I saw anything so striking from the titles of a TV show. But Black Lightning is always at its very best when it defies ordinary expectations.

Akil doesn’t flinch from the political/social elements inherent to this series. We see Issa Williams [played by Myles Truitt], a young black man who has taken Green Light, choked to death by the police. He poses no threat to them. It’s the “shoot first” and “them vs. us” mentality that has caused much rightful mistrust of the police in communities all across out country.

An effective part of this scene, which is shown as part of a news broadcast, is the headline crawl below the images. It reflects the world around us and so ties Black Lightning to the reality we live in every day.

Churches, especially black churches, can be effective voices for change. Reverend Jeremiah Holt [Reverend Jeremiah Holt] expresses righteous anger over the slaying of Issa Williams - we must always remember the names - but makes it clear this incident is not born of the terrible Green Light drug, but of a consistent, historical pattern of police violence.

Jefferson Pierce [Cress Williams] must face the predominantly white school board, the consequences of the invasion of Garfield High by Painkiller and Syonide, and his own seeming absence from that event and its aftermath. It reminds me of the scene I wrote for the 1995 issue of Black Lightning that got butchered by an incompetent DC Comics editor. The powers that be are determined to make Jefferson the scapegoat for the violence. This rang true to me.

Lynn Stewart [Christine Adams] is interrogated by Agent Percy Odell [Bill Duke]. Odell oozes venom. He cares nothing for Lynn, those metahuman children locked in those pods, or any damned thing that makes his life even mildly more difficult. He does not give a rat’s ass that Lynn might be the only person who can help those kids. As we’ll see, he doesn’t think of them as human. When Odell terminates the interview, he terminates Lynn’s access to the pods.

Cut to a scene where Jennifer Pierce [China Anne McClain] wakes up to find big sister Anissa [Nafessa Williams] hovering at the edge of her bed. During the night, while Jennifer slept, her electrical powers activated without her knowledge. She was floating above her bed. This scares all concerned.

Then we get the highlight of the opening act of this episode. Kara Fowdy [Skye P. Marshall], who has been working with the government, is planning to get the heck out of Freeland. But Tobias Whale wants to “chat” with her about the contents of the briefcase he acquired last season. He’s sent Syonide [Charlbi Dean Kriek] to invite Fowdy to sit down with him. Fowdy ain’t having that. The two women draw down on each other and the bullets start flying. The real fun comes when they run out of bullets.

The physical battle between Fowdy and Syonide is one of the best on the series to date. Kudos to the actresses and the choreographers for making this work so well. I lost it when Fowdy removes her high heels and triggers the blades within. That caught me by surprise, but not as much as Fowdy killing Syonide. I actually shouted “No!” at the TV screen. I love Syonide! I mean, I love Fowdy, too, but I was stunned by this unexpected death. Forgive me if I hope to see Syonide brought back to life in a future episode. She’s too great a character to disappear from this series.

What made this episode outstanding were the incredible performances from every member of the cast and that every scene delivered some fraught-with-meaning payoff. When Jefferson and Lynn discuss their respective days, it sounds authentic despite how crazy their days were. That they aren’t on the same page regarding Jennifer seeing a therapist or other situations is heartbreaking. What also comes through is Jeff’s obsession with killing Tobias Whale. I fear he’s in danger of crossing the line between justice and vengeance.

Fowdy visits Peter Gambi [James Remar] at the former agent’s tailor shop. Earlier in the episode, we saw Kara take out Syonide. Now we see her desperate and frightened. She wants to get out of the life. She’s willing to confront Tobias to do so.

A meeting between Jefferson and Dr. Napier Frank [Robert Townsend], a school board member, brings home how much the board wants Jeff’s head. The two men have been friends since the Olympics, but Frank makes it clear he’s more concerned with saving the school and not Jefferson’s job.

During the meeting, we get a clear, poignant notion of underlying racism among the white school board members. They have money to put metal detectors and police officers in the school, but not for the books, computers and other educational things Garfield High, like most schools, could use. Unlike Jefferson, the board has no qualms about treating innocent students like criminals.

Cut to the church where real-life civil rights and social justice attorney Benjamin Crump is explaining to the concerned parents of the kids in the pods that the government refuses to give them any access to those kids. It echoes the Trump Administration’s illegal separation of immigrant children from their parents. It will take at least half a million dollars to help these families bring suit against the government.

Afterwards, Jeff and Anissa argue about the next course of action for Black Lightning and Thunder. Jeff wants to leave the pod kids to the authorities and concentrate on Tobias Whale. Once again, we see Jefferson fixating on the man who killed his father over other equally weighty concerns. What makes him such a amazing character is that he doesn’t always do the right thing, that he gives in to what he hasn’t yet realized is his dark side.

Jennifer and Lynn have a conversation that points out how they have so many consequences to deal with and resolve. Jen doesn’t want to have powers. Lynn killed a man with a shotgun. They watched Gambi murder a man in cold blood. When Jen loses control of her powers and accidentally injures Lynn, the fear on their respective faces made my stomach drop. Every scene in this episode carried so much emotional and situational weight.

Thunder invades a drug house. What makes this such an astonishing scene is how smoothly the action flows and how much Thunder seems to be enjoying herself. This is something we are seeing less from her father as the consequences of his superhero activities tear at the fabric of his life. A friend of mine opined that Thunder would make for a good spin-off series. I couldn’t disagree, but I think her role in this series is vital. Hey, maybe a made-for-TV movie. Like a hard-ass afternoon special but aired in the evening.

The conversation between Black Lightning and Bill Henderson [Damon Gupton] knocked me for a loop. What a brilliant scene played by two of the finest actors of our time! The raw emotion between old dear friends coming to a turning point in their relationship and the possibility that relationship will not survive. I don’t think I blinked once during this scene. It was too riveting.

I swear if I get to do write a Black Lightning ongoing following Black Lightning: Cold Dead Hands, Henderson will join that book’s supporting cast. I was hesitant to include him because Jefferson’s grandmother is named Henderson, but then this occurred to me:

Why couldn’t Bill Henderson be related to her? Which would make him related to Jefferson as well. What storytelling gold could I mine from that vein?

Since I’m about at the halfway point of this episode, I’m going to split this into two parts. Come back tomorrow for the conclusion of my commentary on “The Rise of the Green Light Babies”...

Posted by Tony Isabella at 2:13 PM