NO COUNTRY FOR OLD HEROES 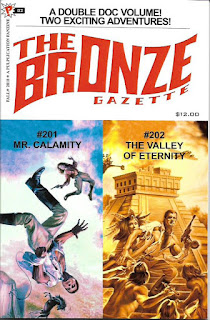 The Bronze Gazette #82 [$12] arrived the other day and, right off the bat, I was taken by editor Chuck Welch’s opening piece, “Bronze in Amber.” In it, he asked if Doc Savage will last much longer. He wrote:

A recent Flearun thread decried how few of our children picked up our love of the character. Doc Savage is a fly trapped in amber. His foes, motivations and expectations are close to 90 years in the past. While he have a contingent of fans who want Doc to never change, I believe the future of Doc Savage rests in new blood and approaches.

A few years back, while attending Pulpfest in Columbus, Ohio, I was met with horrified reactions when I suggested to writers of what is commonly called “new pulp” that Doc Savage, the Shadow and so many other beloved pulp magazine heroes had to be updated to reach the modern audiences. They were chained to the notion that those heroes had to adventure in the 1930s and 1940s.

What I would do with Doc Savage is figure out his timeless core values, values that could exist beyond the decades of his original adventures. Then I would remake Doc from that starting point. I’d update his origins to reflect modern science and the world of the present. I would look at his aides with an eye towards diversity. Do they all have to be straight white men? Do their quirks make any sense in 2018? I would look at his foes and give him villains who fit our modern world. At the end of the day, though I might change his supporting cast to a significant degree, I would present fans with a Doc Savage for today.

I enjoy the original Doc Savage novels. I enjoy the new Doc Savage novels written by my pal Will Murray. If Will keeps writing them, I’ll keep reading them. But I don’t think the future of Doc Savage  must or should rely on these fine vintage adventures. I think, like so many things in life, Doc Savage’s mantra should be...

In the meantime, do check out The Bronze Gazette. This new issue is packed with fascinating articles, such as Murray’s reflections on Philip Jose Farmer’s Doc Savage novels and a tribute to Ron Wilber, a wonderful artist who left us too soon. 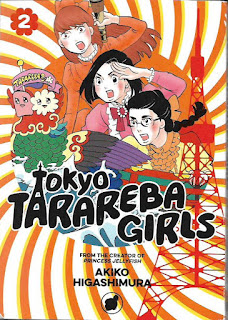 Having finished Assassination Classroom and Princess Jellyfish, I have been looking for a new favorite manga series. Tokyo Tarareba Girls by Akiko Higashimura, the creator of Princess Jellyfish, is a contender. Here’s what I wrote about it several weeks back in my Tony’s Tips!” column at Tales of Wonder:

Tokyo Tarareba Girls is a comedy aimed at young women in their late teens or somewhat older young women who have entered the job market and making their own way in the world. Clearly I don’t fit squarely into that demographic, but Higashimura is a skilled creator with a fun sense of humor. His work speaks to me.

Our heroine is Rinko, a 33-year-old writer of romance teleplays who has never been married. Her career has gotten a little shaky, her love life is non-existent. Her leisure time is spend drinking with  Kaori and Koyuki, her best friends since high school. On one such night, their loud complaints about men and their situations annoy a handsome man in the bar. He tells them they are “what if” women, constantly bitching about what might have been instead of trying to change their lives. Rinko vows to get married by the Tokyo Olympic Games in 2020.

Rinko’s path crosses that of the handsome man at her job. It’s not a pleasant coincidence. But, even as Rinko takes some hits at work, the reader can’t help but hope to gets everything she wants out of life. I know I’m rooting for her.

Tokyo Tarareba Girls is a seven-book series. I’m in for their whole ride. There has also been a ten-episode TV series, but I won’t seek that out until I finish reading the manga.

If you’re into manga beyond the usual battle, horror, or science-fiction tales, I think you’ll enjoy Tokyo Tarareba Girls.
I’ve now read the second of those seven volumes and, well, Rinko, Kaori and Kayuki are making bad decisions. Will these bad decisions derail their quests for happiness and romance? That strikes me as a real possibility and one that adds a serious note to the series. But that serious notes elevates Tokyo Tarareba Girls from a series I have been getting via my local library system to one I’m buying. Consider my previous recommendation doubled. 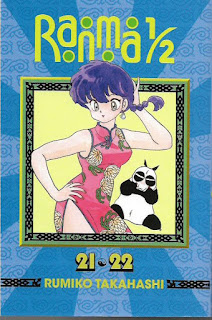 My search for manga has reunited me with Rumiko Takahashi’s Ranma 1&2. This is a goofy epic of a teen martial artist and his frankly insane father. Training at cursed springs, they fell into various springs and now, when they get wet, they turn into, respectively, a buxom young woman and a giant panda. Which is actually one of the least crazy things about this series. Ranma has multiple fiancées, none of his own choosing. He has rivals for these fiancées, some of whom, fiancées and rivals alike, have also fallen into the cursed springs. He has a feared grandfather who steals panties. He faces martial arts disciplines such as combat cheerleading. If a reader can embrace this madness - and you know I can - they will receive big laughs at a rapid pace.

I just finished reading Ranma 1&2 (2-in-1 Edition) Volume 11 [Viz; $14.99], which collects books 21 and 22 of the series. This volume starts with battle between father and son and continues with cherry blossoms that reveal true love, the combat cheerleading mentioned earlier, Ranma and his dad avoiding his mother because of a seppuku vow Dad made, Ranma seeking to get one of the fiancees he doesn’t want to confess her love for him and a ghost who is unable to move on from this world because Ranma’s grandfather refused to steal her panties. Embrace the madness.

Posted by Tony Isabella at 1:08 PM