BLACK SUPER-HEROES OF THE 1970s 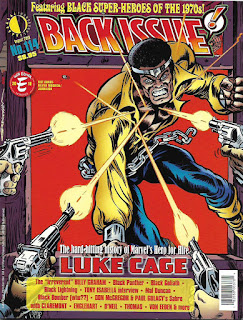 I greeted the arrival of Back Issue #114 [TwoMorrows; $8.95] with a combination of sincere interest and more than a little wariness. The issue was devoted to “Black Super-Heroes of the 1970s” and, as I knew from past experience, that meant I would have to comment on and correct  misinformation that would surely be present on the magazine’s pages.

I don’t fault Back Issue entirely. In the case of Black Lightning, past executives and employees of DC Comics spread scandalous lies and slander concerning me and my creation of their most-iconic black super-hero...and their broken agreements with me...and much more. It is a continuing tragedy that the company has never really appreciated or understood Black Lightning and my work on the character who now headlines a terrific TV series.

To their credit, the current management of DC Comics has treated me better than the previous managements, though that is an exceedingly low bar to meet. They might not understand how insulting it is to reduce Black Lightning to Batman’s support Negro, but, at least, I got a chance to show today’s comics fans who Black Lightning truly is in Black Lightning: Cold Dead Hands. And, despite my issues with DC Comics, the company has kept its financial agreements with me.

Which brings us to Back Issue #114 and this not precisely a review of that issue. Overall, the issue is excellent. I have recommended the magazine in the past and I expect I’ll continue to recommend it for many years to come. All that keeps it from being my favorite comics magazine is Roy Thomas’ Alter Ego, also published by TwoMorrows. If I ever actually retire, I plan to reread the entire runs of both of these fine journals.

On to my comments and corrections...

Let's start with a minor quibble with editor Michael Eury's editorial in which he wrote "Creators of color, including the late Billy Graham...also began to find employment in the business."

Creators of color were working in the comics business almost from the start. The first story in Detective Comics #1 was both written and drawn by a black man. There have always been at least some creators of color in the field, including Matt Baker and Cal Massey. The latter drew many 1950s stories in various genres for Marvel. He went on to become a world-famous sculptor.

To be sure, creators of color began to work in comics in far greater numbers than previously during the 70s. Eury didn't include that distinction. Hence, the need for this correction.

A couple years later, when I was writing Power Man, then-editor Len Wein told me Luke Cage didn’t have super-strength. When I pointed out Cage had literally punched his way through a concrete wall to escape from Seagate Prison, Len said Luke was invulnerable and, as such, could keep punching the wall until it broke. I estimate that punching through such a wall with normal strength would take  decades. Luke did it in a matter of panels.

My admiration for Len’s writing knows no bounds. He was one of the best and an influence on my own writing. He was also a dear friend. Unfortunately, Len was also what I called an “editor savant.” He’d proclaim rules for characters and stories that truly only existed in his mind. In the case of Cage and the particular action that Len objected to, I made a silly change to appease him and then ignored his proclamation going forward.

******************************
Focusing on Black Goliath, “Brains and Brawn” by Dan Tandarich was another excellent article. In retrospect, I’m wondering what I had against happy marriages. First, I broke up the hitherto unrevealed marriage of Bill Foster and Claire Temple. Then, I did the same with Jefferson Pierce and Lynn Stewart. Though, in all fairness, I  always intended Jeff and Lynn to remarry.

******************************
Not surprisingly, I have no quibbles with “Lightning Strikes Three Times (and Counting!)”. The esteemed John Trumbull interviewed me on Black Lightning and my long history with my creation during the East Coast Comicon on April 28, 2018. Given that I have an ego the size of a planet, it will also not surprise anyone that this is my favorite feature in this issue.

******************************
In his “Gone But Mercifully Forgotten: How the Black Bomber Bombed Out”, Trumbull wrote about the unbelievably offensive super-hero I talked DC Comics out of publishing. In this article, my friend Mike Gold is quoted saying: “DC didn’t need Tony to be motivated to write off those scripts. They just wanted to see if anything could be salvaged. They probably knew better, but what the hell. Give it a shot.”

My opinion differs from Mike’s because I have been seeing DC’s tone-deafness on characters of color since the beginning of my experience with them. Once I stopped writing Black Lightning in the 1970, the company began to diminish my creation. I’d like to think this was unintentional. But the facts...

When Black Lightning started appearing in Detective Comics, he had been stripped of his electrical powers. When he appeared in Batman and the Outsiders, with his electrical powers back, he was stripped of his super-strength. When Black Lightning’s daughter Thunder was introduced, there was at least one editor who suggested she be the daughter he didn’t know he had, turning the most principled hero in the DC Universe into a baby daddy. Even now, with his own TV show, my creation was reduced to Batman’s support Negro, a kept super-hero who, after abandoning his family, students and community, now lives in an apartment paid for by Batman. Who I presume leaves the money on the night stand when he leaves.

Let’s also consider the historical aspects of DC’s earlier comics. Krypton had black people; they lived on an island separate from the white Kryptonians. Which is a racist dream. When Tyroc appeared in the Legion of Super-Heroes strip, his people lived on a Brigadoon-type island that only appeared in the world every few decades. Yet another racist dream.

DC as a corporation has frequently been tone-deaf when it comes to character of color. I don’t think it was acting any differently in the case of the Black Bomber.

******************************
It will take several comments to discuss Ed Lute’s “Black Lightning Beyond Isabella”. This shouldn’t be taken as a slight against Lute. His sources gave him incomplete or incorrect information.

Right out the gate, I suggest you take Trevor von Eeden’s various pronouncements with the proverbial grain of salt. In this article, he claims to have been insulted when I asked him to channel Carmine Infantino in a story I had written specifically with the intent of invoking the Silver Age. If he was insulted, it’s not something he voiced to me or anyone else at the time. I thought he did a great job on this issue.

Sidebar. In recent years, Trevor has stated that he thought it was insulting for Black Lightning to wear the Afro-Mask, something he never expressed while working on the book. He has also made claims that he was DC’s first real black artist - he wasn’t - and that he was the first to make Black Lightning fly in an unpublished story written by Tom King. He wasn’t. And, despite telling me to my face that he didn’t consider himself a co-creator of Black Lightning, he now makes that claim from time to time when it suits him.

These are public matters. My other issues with Trevor, who I will always honor as the first artist on the Black Lightning comics, are more personal and will not be discussed here. End sidebar.

Re: Black Lightning’s cancellation. I was told that it was one of three titles on the bubble. Clearly, the bubble burst. I was also told the person directing the Implosion cancellations didn’t take into account that the comic books now cost more than they used to and were not necessarily less profitable. I was gone from DC Comics by this time, so I can’t vouch for the accuracy of what I was told.

Re: The World’s Greatest Super-Heroes comic strip. Believing that DC was still operating under our partnership agreement, I was close to landing a Black Lightning newspaper strip with a syndicate. When I informed DC of this, they killed the project, saying the Chicago Tribune had exclusive rights to all their super-heroes. I have no way of judging the accuracy of their statement. However, I do know it took me an extremely long time to get DC Comics to admit that they owed me money for Black Lightning’s appearance in their strip and about as long to finally get paid for it.

******************************
As I said up top, Back Issue #114 is an excellent issue of a truly fine magazine. However, when it comes to Black Lightning, writers who fail to come to the creator of this iconic super-hero for their information will inevitably publish misinformation. It happens time and time again.

My career and those of other creators has suffered because of such misinformation. Sometimes the falsehoods are born of actual malice. Sometimes it’s an uninvolved employee or former employee sticking to a publisher’s talking points. Sometimes it’s because someone is accepting as truth a story they heard second or third hand. Whatever the driving force behind the misinformation, it does damage to the writers and artists who create the comics you love.

There are companies and publishers who would prefer that creators are neither seen nor heard. One of the reasons I post all of those birthdays and remembrances on my Facebook page is because I don’t want these creators to be forgotten.

As for me, I’ll not be disappeared. I will not go quietly into any night, good or otherwise. When it comes to me and my work, I will forever speak my often inconvenient truths.

Vicious falsehoods and absurd speculations be damned. You know who I am. You know my work. You know what I stand for.